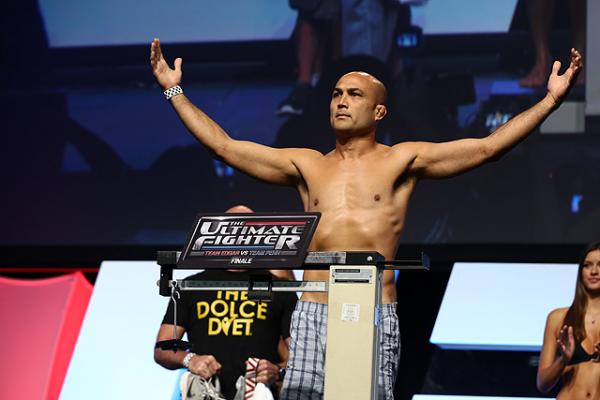 B.J. Penn was backed by a familiar war cry for his final walk through the curtains.

Penn and rival Frankie Edgar headlined “The Ultimate Fighter 19” Finale on Sunday at the Mandalay Bay Events Center in Las Vegas. The third fight in their trilogy told a completely different story, but the soundtrack was the same.

A song about conflict and ambushing your enemies seems an ideal choice for any fighter looking to make a statement. In his first meeting with Penn in April 2010, Edgar needed to prove he belonged with the sport’s elite. Four years later and with two wins over the living legend in tow, Edgar did not need The Notorious B.I.G. classic battle rap “Kick in the Door” to sneak up on Penn. Edgar politely knocked on Penn’s door, was welcomed inside and then proceeded to ransack “The Prodigy” in every aspect of MMA throughout their headlining bout.

Penn’s martial arts career was marked by otherworldly natural abilities as he embraced his Hawaiian roots. Paired with Hawaiian musician and state folk hero Israel Kamakawiwo’ole, the former two-division Ultimate Fighting Championship titleholder handpicked the song “Hawai’i ’78” as his entrance theme. “Hawai’i ’78” is a song about inner reflection and facing your future. Penn’s walkout song may not pump up anyone, but the acoustic lyrics can hit home to any prizefighter on the final legs of his or her career.

When the bell sounded, Edgar beat up on Penn for nearly three rounds. On the feet, “The Answer” was first to the punch and connected on multiple unblocked combinations. The 32-year-old Edgar also hit on takedowns in all three rounds. The finale came in round three, where Edgar fired away on Penn with a steady stream of ground-and-pound before referee Herb Dean called off the fight.

Penn walks away from the cage with hall-of-fame credentials, while Edgar continues to stack wins in his mission to once again wear UFC gold.

“The Ultimate Fighter” Season 19 light heavyweight winner Corey Anderson hit a walkout song home run with his selection of MC Hammer’s “U Can’t Touch This.” On a suggestion from his mother, Anderson marched to the cage to one of the biggest songs of the 1990s. When Anderson was hospitalized as a child, family and doctors were amazed that the song “U Can’t Touch This” was the first thing to which he responded when he was in an unconscious state.

Off the 1990 album “Please Hammer, Don’t Hurt ’Em,” which sold 18 million copies, Anderson’s walkout pick encouraged defense. However, the 24-year-old unleashed nothing but rapid-fire offense against Matt Van Buren. Anderson swarmed the Alliance MMA representative with punching combinations and takedowns, as he captured a UFC contract with a first-round TKO.

With just three professional fights to his name, Anderson’s trip from prospect to UFC signee is a story that cannot be touched.