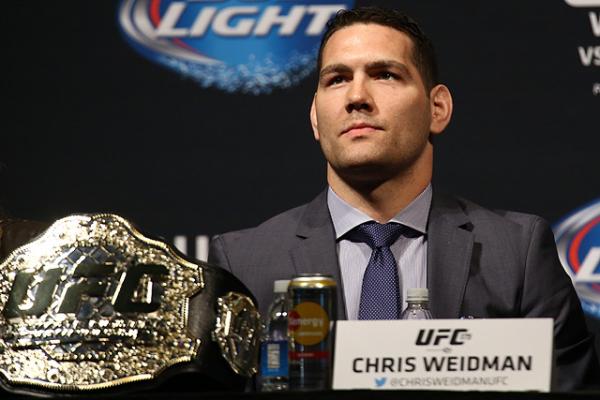 Chris Weidman showed the heart of a champion.

In the UFC 175 main event on Saturday at the Mandalay Bay Events Center in Las Vegas, the “All-American” dug deep in defeating Lyoto Machida by unanimous decision to retain the Ultimate Fighting Championship middleweight crown. Over the course of the final 10 minutes, a fatigued and at times hurt Weidman refused to back down in the face of the most adversity he has faced inside the cage.

Tom Petty’s song “I Won’t Back Down” was a perfect anthem of defiance when Weidman was an underdog. Now as a hunted champion, the 30-year-old stuck with the walkout track that saw him shock the world not once but twice against the great Anderson Silva. Despite walking out to a song about non-violent protest, Weidman unloaded on Machida with every weapon at his disposal for the first three rounds of their title bout.

On the 1992 hip hop club hit “Jump Around,” Everlast raps “Pack it up, pack it in, let me begin. I came to win. Battle me, that’s a sin.” Trained by his father, Shotokan karate master Yoshizo Machida, the middleweight challenger has been trained to jump around on the balls of his feet to perfect his striking stance since he was 3 years old. The song “Jump Around” works on multiple levels as both a walkout jam and a prefight cardio warm-up.

In rounds one through three, Weidman imposed his will on Machida through timely striking and on-point takedowns. Down three rounds to none, “The Dragon” mounted a rally in the championship frames that turned the UFC 175 headliner into an instant classic. A measured left cross from Machida froze the champion in motion midway into round five. After being dazed, Weidman had his own “I Won’t Back Down” moment in the final round. With his chin tested, Weidman countered with a clean overhand right and an elbow from in tight that shut down any chance of a late Machida comeback. 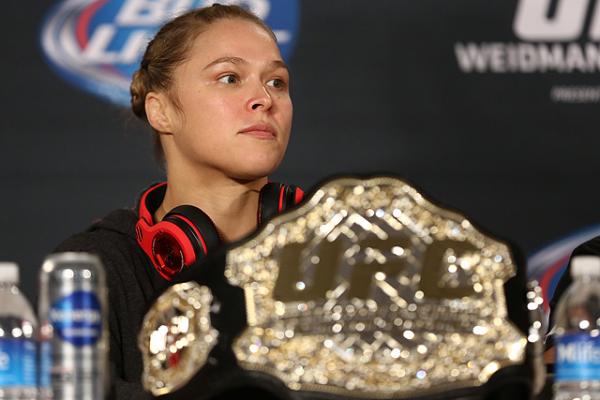 Photo: D. Mandel/Sherdog.com
Rousey lived up to her reputation.
The opening instrumental guitar riff on the Joan Jett punk rock head banger “Bad Reputation” lasts eight full seconds. A little more than eight seconds into her title defense against Alexis Davis, Ronda Rousey had already punched, thrown and pounded her challenger into a near-unconscious state. Rousey’s reputation as the “Baddest Women on the Planet” was only reinforced further in the UFC 175 co-main event.

Does Rousey putting the black leather boots to her opponents make her walkout song better or does the rasp of Jett’s voice make the “Rowdy” one’s prefight ritual more intimidating?

Since Rousey picked “Bad Reputation” as her anthem, the Olympic judoka has been an unstoppable train of pain for any woman placed across the cage from her. Like peanut butter and jelly or judo throws and armbars, Rousey’s personality and fighting style blend flawlessly with Jett’s rebel persona.

The pop vocals of teen sensation Lorde had taken Davis from Invicta Fighting Championships competitor to her spot as the No. 1 contender at 135 pounds in the UFC. Compared to the mega star power of Rousey, Davis walked to the cage as both a heavy underdog and anti-celebrity fighter who shied away from pre-fight theatrics. The number one pop song of 2013, “Royals” is all about larger-than-life living and riches. If Davis had upset Rousey, her life away from the spotlight would have been turned on its head. However, the most dominant performance of Rousey’s career saw the 27-year-old throw and knock out Davis in 16 seconds. The UFC women’s bantamweight champion walked away with her title in hand and her status as the face of women’s MMA firmly engraved.

On the undercard, debuting bantamweight Rob Font selected rapper ScHoolboy Q’s jam, “Hell of a Night,” as his personal soundtrack. Two minutes into Font’s fight with George Roop, the Massachusetts native turned in a performance of the night. Font improved to 11-1 in his career and earned a post-fight UFC bonus of $50,000.