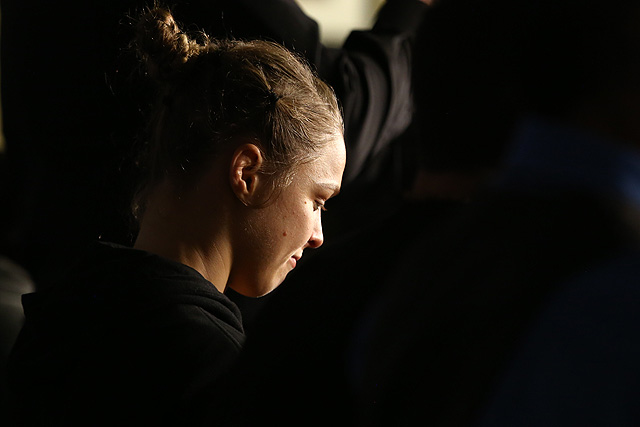 
Ronda Rousey on Saturday affirmed her place as the best women’s bantamweight in the galaxy, as she submitted Cat Zingano with an armbar 14 seconds into their UFC 184 main event at the Staples Center in Los Angeles.

Rousey certainly has a reputation for snatching nasty arm locks, and the capacity crowd witnessed her further that reputation against the previously unbeaten Zingano. As has become customary, the Ultimate Fighting Championship women’s bantamweight queen opted to walk out to Joan Jett & The Blackhearts’ seminal rock track “Bad Reputation” -- one of the standout gems from their 1980 studio album of the same name. However, the only bad thing about the “Rowdy” one’s reputation is that she is has essentially run out of viable opponents to mow down.

Mixed in with the usual hip-hop trappings were a few metallic cuts, which is not always the case with a UFC event soundtrack. American Top Team veteran Gleison Tibau chose “Iron Man” from metal pioneers Black Sabbath’s 1970 album “Paranoid,” but the Brazilian was anything but iron against “The Ultimate Fighter 13” winner Tony Ferguson. The lanky Californian jumped all over Tibau after he staggered him with a right hand, ultimately finishing him with a rear-naked choke. A winner of five consecutive fights, Ferguson’s party has just begun at 155 pounds, which seems fitting since he strolled to the Octagon to Freestyle’s “The Party Has Just Begun” before dismantling Tibau.

Meanwhile, former King of the Cage champion Tim Means went with the popular track “Dragula” by horror-themed veteran Rob Zombie. Even though the choice of music did not really fit in with anything relating to MMA or Means’ bout with Dhiego Lima, “The Dirty Bird” likely shouted about as many “yeahs” as Zombie yells per song after he trounced his foe with punches in the first round.

Finally, Mark Munoz used “Tell Me When to Go,” a popular rap cut from E-40, as his entrance music. Unfortunately for the 2001 NCAA wrestling champion, opponent Roan Carneiro told him to go just 1:40 into their fight. Munoz went to sleep courtesy of a beautiful rear-naked choke, as “Jucao” returned to the Octagon for the first time since September 2008 and did so in triumphant fashion.