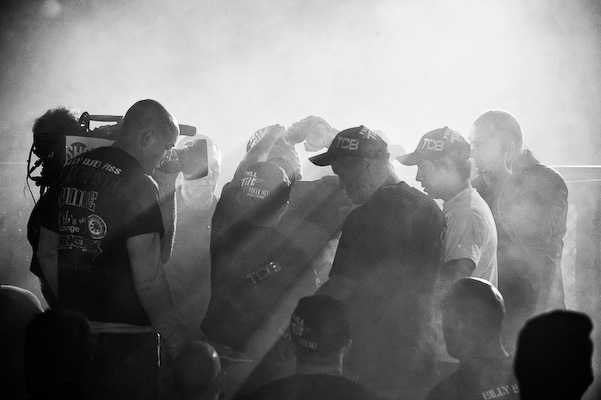 Vitor Belfort is a trailblazer. A pro since 1997, Belfort has seen it all. At UFC Fight Night 32, Belfort may have put two of the promotion’s weight classes on notice: not only with his fight finishing theatrics in the cage. but his next-level grand entrance walking to it.

Fighting once again in front of his countrymen, Belfort selected Jorge Quintero’s “300 Violin Orchestra Remix” as his battle cry. But why let someone else sing you to the cage when you can chant your own inspirational words across the arena’s loud speakers? Only Belfort could walk out to a remixed version of a popular song with his words interposed over the five minute anthem.


Advertisement
Pick-up trucks, warm apple pie, the bald eagle and Dan Henderson’s right hand are points of pride for many if not all citizens of the U.S. Few artists can turn the volume of American patriotism up to 11, but Toby Keith may be one of them. On the last fight of his UFC contract Henderson put his hand over his heart and proudly marched to the cage to the tune of Keith’s 2011 No. 1 hit “Made in America.”

In less than 80 seconds Belfort became the first man to knock out Henderson and likely earned himself a second crack at the UFC’s middleweight title. Belfort finished Henderson with an inspired uppercut to the chin followed by a motivated head kick. Why aren’t more fighters singing or chanting themselves to the cage?

On the undercard -- despite dancing in an often hostile environment -- non-Brazil fighters ruled the walkout game.

The rebirth of Jeremy Stephens as a UFC featherweight and the reemergence of classic 90s hip hop as viable walkout songs cannot be a coincidence. Two of the three most important factors in Stephens win over Rony Mariano Bezerra was his fearless ability to strike at range, a perfectly timed head kick and his decision to walkout out to Gang Starr’s 1998 jam “Work (Victory).”

Stephens’ path to victory came in the first round via a brutal head kick. The 27-year-old Stephens has won his last two fights in his new weight class while DJ Premier and Guru of Gang Starr would have been amazing MMA corner men; work is victory and victory is work.