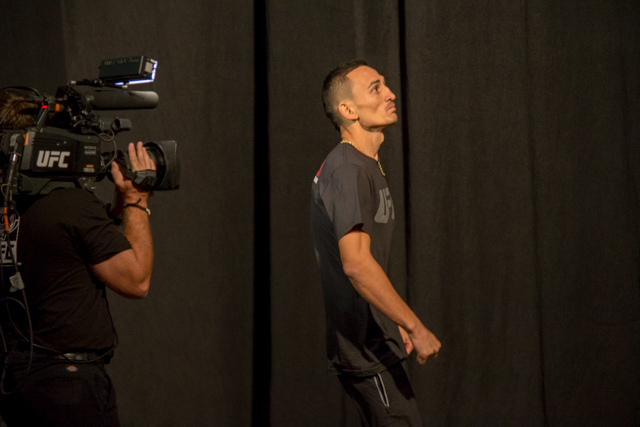 Despite an anti-climactic injury stoppage to the UFC Fight Night “Holloway vs. Oliveira” main event on Sunday at the SaskTel Centre in Saskatoon, Saskatchewan, Ultimate Fighting Championship featherweight contender Max Holloway lived up to his entrance music for as long as the fight lasted.

Holloway entered to the tune of Moki’s “Hawaiian Kickboxer” and immediately started to throw opponent Charles Oliveira off his game through his use of angles. The Hawaiian featherweight pressured Oliveira into the cage with strikes, ultimately leading to the Brazilian’s injury -- he suffered a torn esophagus -- during a scramble against the fence. The technical knockout came 1:39 into round one, with Holloway awarded his seventh consecutive victory and Oliveira carted out on a stretcher.

Meanwhile, UFC welterweight Neil Magny touched down inside the Octagon with Lecrae’s “No Regrets” reverberating through the arena. He clearly did not regret taking the co-main event slot opposite former Jungle Fight champion Erick Silva on short notice, just 22 days after his lopsided loss to 2007 Abu Dhabi Combat Club Submission Wrestling World Championships gold medalist Demian Maia at UFC 190. Magny held off the submission specialist after being taken down twice and did a majority of his damage while using his range to outstrike Silva en route to a split decision. It would have been easy for Magny to question the wisdom of his decision to take the bout had he lost. However, the Elevation Fight Team product rebounded nicely after Maia broke his seven-fight winning streak at on Aug. 1.

Other walkout songs included The Runaways’ “Wild Thing,” which played before Canadian welterweight Patrick Cote knocked out Josh Burkman in the third round of their main-card clash; Survivor’s “Eye of the Tiger,” which played prior to Misha Cirkunov’s submission of Daniel Jolly; and Roy Jones Jr.’s “Can’t Be Touched,” which played before Francisco Trinaldo entered the Octagon and upset previously unbeaten “Ultimate Fighter Nations” winner Chad Laprise.