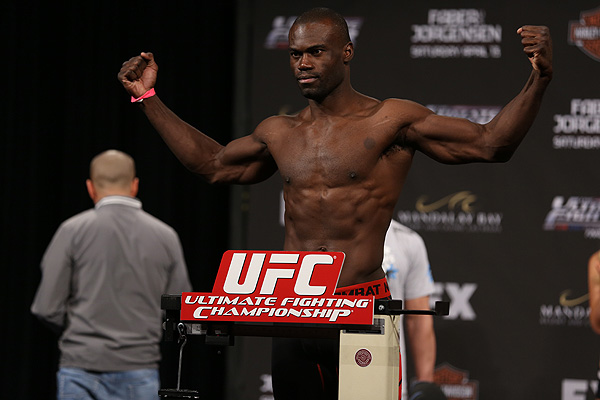 Uriah Hall has finished six opponents, three of them in the first round. | Photo: Dave Mandel/Sherdog.com


Of all the weapons Uriah Hall brought to bear on Season 17 of “The Ultimate Fighter” reality series, the fear he instilled in his opponents was perhaps the most effective.

Hall will confront the undefeated Kelvin Gastelum in the middleweight final at “The Ultimate Fighter 17” Finale on Saturday at the Mandalay Bay Events Center in Las Vegas. Some view it as more of a coronation than a competition, though Gastelum figures to have a substantial say in the matter.

Tabbed as one of the favorites as soon as the Ultimate Fighting Championship unveiled the Season 17 cast, Hall did nothing to disappoint, as the former Ring of Combat champion cruised to the final with wins over Andy Enz, Adam Cella, Robert McDaniel and Dylan Andrews. Only Enz went the distance with him, and he suffered a broken arm for his efforts.

In Gastelum, Hall faces an unlikely finalist. The 21-year-old Arizonan was the youngest competitor to ever appear on the reality series but nevertheless carved through the tournament, ousting Kito Andrews, McDaniel, Collin Hart and Josh Samman en route to the final. Gastelum put away Hart with punches and finished McDaniel and Samman with rear-naked chokes.

“The Ultimate Fighter 17” Finale lineup provides plenty of water cooler fodder. We discuss some of it here:

Whitman: After Hall’s semifinal victory over McDaniel on “The Ultimate Fighter,” Chael Sonnen called him a future title contender. Is “The Gangster from West Linn” correct in his assessment?
Knapp: I think we’re jumping the gun a bit here with our anointing, seeing as though Hall has not yet set foot inside the UFC’s Octagon. Plus, he has already had two previous scrapes with top-flight middleweights and neither of them went well, as he lost to Chris Weidman and Costas Philippou. Hall has all the physical attributes one looks for in a world-class fighter, but the truly great ones are defined by the strength of their hearts and minds. In that regard, the jury remains out on the Team Tiger Schulmann representative. Give him time to prove himself.

Whitman: Win or lose against Scott Jorgensen in the main event, where does Urijah Faber stand in the UFC bantamweight picture?
Knapp: Faber is not leaving the spotlight anytime soon, unless he opts for early retirement. He is too skilled, too accomplished and too marketable to be placed in anything other than high-profile bouts. Will he ever be a UFC champion? Probably not -- he turns 34 in May and has likely put his best days behind him. Still, Faber figures to hover around the top of the bantamweight division for the foreseeable future and can always be utilized as a bankable late substitution in the event a scheduled title challenger goes down with an injury.

Whitman: What does Jorgensen, a former title contender in the WEC, need to do in order to come out on top against the perennially excellent Faber?
Knapp: This is a tough one. I could be wrong, but this looks like a horrendous stylistic matchup for “Young Guns.” Faber can do everything Jorgensen does better. His best bet may be to peck away with low kicks and straight punches from the outside and mix in takedowns when and if the opportunity presents itself. Outside of a cut, Jorgensen does not seem like a strong candidate to finish Faber -- the man went the distance with both Jose Aldo and Renan Barao -- so he will likely have to win on points to be successful.

Whitman: Most people thought Miesha Tate was going to roll through Julie Kedzie in her final Strikeforce appearance. Instead, the former champion was nearly knocked out before securing a come-from-behind armbar to win the day. Still, Tate appeared mostly lethargic in that bout -- a serious departure from her normal hard-nosed style. Will the old “Cupcake” return against Cat Zingano?
Knapp: Getting kicked in the head tends to make one lethargic, so I cannot put too much stock in Tate’s performance against Kedzie. I doubt she knew where she was for much of the fight, so the fact that she won it speaks volumes about her drive to succeed. The bigger issue is Zingano, a powerful wrestler and deft grappler who shares many of Tate’s strengths. Most believe Tate will have to rely on her experience and guile in order to get past the undefeated Coloradan. I tend to agree with those sentiments.

Whitman: Travis Browne went from blue-chip prospect to afterthought last year courtesy of a torn hamstring and Antonio Silva’s massive fists. Will he rebound against Gabriel Gonzaga and start his climb back up the heavyweight ladder?
Knapp: The loss to Silva does not look nearly as damaging as it once did, considering “Bigfoot” has since laid waste to Alistair Overeem and will challenge Cain Velasquez for the heavyweight championship at UFC 160 in May. Browne remains an intriguing figure within the division, and I expect him to get back on track at Gonzaga’s expense. Unless “Napao” finds a way to employ his takedowns and grappling to greater effect, Browne’s combination of size, speed and athleticism figures to pose some serious problems for the resurgent Brazilian veteran.