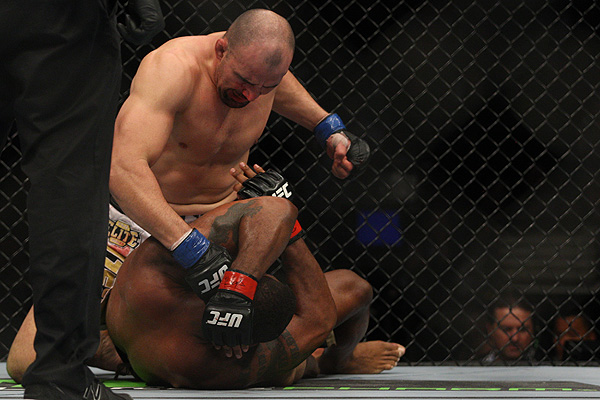 Glover Teixeira has not lost a fight in more than eight years. | Photo: Dave Mandel/Sherdog.com


The golden carrot now dangling within reach, Glover Teixeira finds himself perhaps one step away from challenging for the Ultimate Fighting Championship light heavyweight crown.

Teixeira will lock horns with “The Ultimate Fighter” Season 8 winner Ryan Bader in the UFC Fight Night 28 main event on Wednesday at Jornalista Felipe Drumond Stadium in Belo Horizonte, Brazil. An impressive victory for the Brazilian jiu-jitsu black belt could launch him into a title bout against the forthcoming showdown between light heavyweight champion Jon Jones and Alexander Gustafsson.

A longtime training partner of UFC hall of famer Chuck Liddell, Teixeira will enter the cage on the strength of a 19-fight winning streak. The 33-year-old Brazilian last appeared at UFC 160 in May, when he submitted James Te Huna with a first-round guillotine choke at the MGM Grand Garden Arena in Las Vegas. Teixeira has delivered 18 of his 21 professional victories by knockout, technical knockout or submission, 15 of them inside one round.

Bader has posted three wins in his past four outings. The 30-year-old Power MMA Team member last fought at UFC on Fox 6 in January, when he needed less than a minute to put away former International Fight League champion Vladimir Matyushenko with a guillotine at the United Center in Chicago. Bader was a two-time NCAA All-American wrestler and three-time Pac-10 conference champion at Arizona State University.

The UFC Fight Night 28 “Teixeira vs. Bader” lineup provides plenty of water cooler fodder. We discuss some of it here:

Whitman: Although Bader is a talented, powerful guy, I think the flaws in his standup will ultimately prevent him from ever ascending to the light heavyweight division’s upper echelon. To me, this main event looks like a Dominique Wilkins-inspired power windmill jam for Teixeira. Do you agree or disagree?
Knapp: I believe that is the scenario the UFC envisioned when it made this match. Outside of Teixeira, there are not a whole lot of viable title contenders at 205 pounds at the moment. Maybe you could make a case for Phil Davis, but his controversial victory over Lyoto Machida at UFC 163 did little to inspire the masses. On paper, this certainly looks like a one-sided matchup in Teixeira’s favor, but he still has to climb inside the cage and get the job done. I think he does. 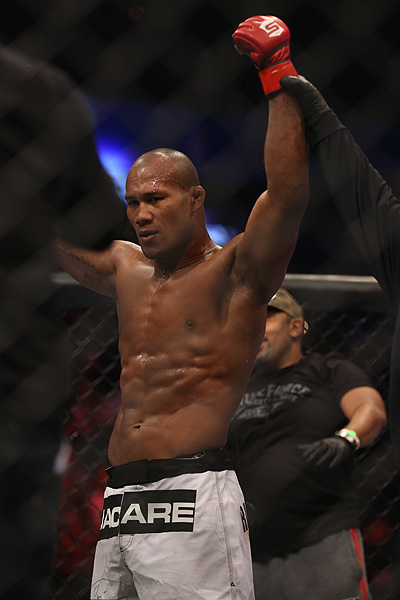 Photo: D. Mandel/Sherdog.com
Souza wants a shot at the gold.
Whitman: If Ronaldo Souza beats Yushin Okami, do you think it earns him a title shot?
Knapp: He would have a case, to be sure, especially if he can take out Okami in dominant fashion. Right now, “Jacare” trails Anderson Silva and Vitor Belfort in the title chase at 185 pounds. With that said, his otherworldly grappling skills and improving standup makes him one of the more intriguing contenders in the middle division, and I think he finds his way into a title bout sooner or later.

Whitman: The odds seem long against Jussier da Silva finding an opening given Joseph Benavidez’s pace and conditioning. Does “Formiga” have a prayer of stopping Joseph Benavidez’s power punching and takedowns?
Knapp: I could not envision a less favorable matchup for da Silva at 125 pounds. It makes me wonder what his handlers were thinking when they accepted it. Benavidez is better at what the Brazilian does best. I foresee him winning the scrambles, trapping “Formiga” on the feet and finishing him inside the distance, either with punches or with one of those patented Team Alpha Male guillotines. I bet Miguel Torres still has nightmares about it.

Whitman: I think Francisco Trinaldo’s track record indicates he is for real. When the only loss in your last eight fights was the result of 15 hard-fought minutes with a guy like Gleison Tibau, you get a tip of the cap from me. Riding back-to-back submission wins over C.J. Keith and Mike Rio, Trinaldo will now look to do something similar to Polish prospect Piotr Hallmann. Will “Massaranduba” pick up his third straight UFC win?
Knapp: Trinaldo was a solid addition to the lightweight division and possesses the skills needed to someday crack the top 10. However, he succumbed to five takedowns in his loss to Tibau at UFC 153 and will need to shore up that side of his game if he wants to truly excel in a division populated by high-level wrestlers. That will not be an issue against Hallman, who has not faced anyone close to Trinaldo’s caliber on the European circuit. My guess is the Brazilian cruises here.

Whitman: Yuri Villefort was once considered one of the best welterweight prospects in the game before a knee injury derailed his rise. Now riding consecutive defeats, Villefort will search for his first Octagon win against Sean Spencer. Do you think the 22-year-old rights his ship and takes a step toward fulfilling his considerable potential?
Knapp: A number of questions about Villefort could be answered in this fight. How does he handle the pressure of a must-win match? Can he turn his obvious skills into results on his sport’s biggest stage? The Brazilian prospect already lost to two men he should have beaten in Quinn Mulhern and Nah-Shon Burrell, and a third such defeat would place his spot on the UFC roster in jeopardy. Spencer can be had on the ground, which provides Villefort with a clear path to victory. I think he capitalizes on it.