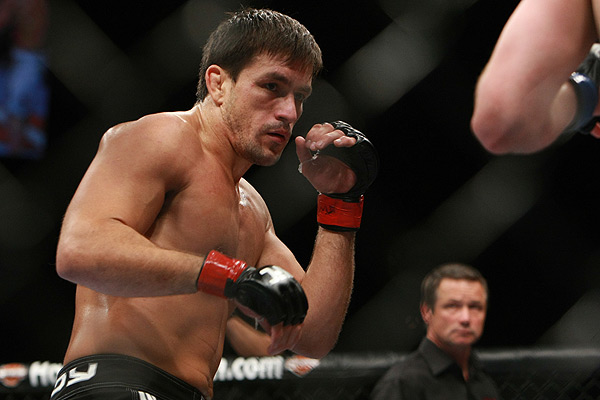 
Jake Shields drew the assignment no one in the welterweight division wanted.

Shields last fought at UFC 161 in June, when he eked out a controversial split decision over Tyron Woodley at the MTS Centre in Winnipeg, Manitoba, Canada. The 34-year-old Californian’s UFC tenure has been marred by uneven performance and an embarrassing suspension for a failed drug test in August 2012. A Cesar Gracie protégé, Shields has held titles inside the Shooto, EliteXC and Strikeforce promotions. More than half (19) of his 35 career bouts have reached the judges.

The UFC Fight Night 29 “Maia vs. Shields” lineup provides plenty of water cooler fodder. We discuss some of it here:

Whitman: I think Shields is going to have trouble against Maia, as this is a bad style matchup for him. Do you agree or disagree?
Knapp: I could not agree more. Shields will need to lean heavily on his kicks, clinch game and guile if he wants to leave the cage victorious. Maia could conceivably hold the advantage in every other area. Outside of perhaps Renato Verissimo, Shields has never dealt with a submission grappler of this caliber in the cage, and that cannot bode well for him in a five-round fight. I expect him to hang in there for the duration, ultimately losing a decision.

Whitman: Erick Silva is a fun prospect to watch, but I think Dong Hyun Kim is going to “big brother” him in the same way Fitch did at UFC 153. Do you see it going that way, or no?
Knapp: This matchup will tell us a lot about Silva’s true ceiling. At 29, the time has come for the Brazilian to shed the prospect label and become a viable contender at 170 pounds. We will see what he learned against Fitch when he meets Kim, another welterweight brute who has become known for grinding opponents into the mat. I see Silva staying upright and using his athleticism and speed to stop Kim with punches. 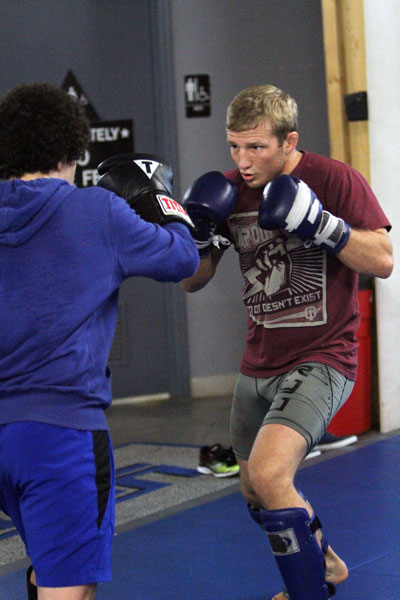 Photo: Jeff Sherwood/Sherdog.com
Dillashaw is on a roll.
Whitman: T.J. Dillashaw and Raphael Assuncao are two guys on the card who are definitely worth watching. It is tough for me to call a winner, but I lean towards Dillashaw. How do you see it?
Knapp: Considering the tear his Team Alpha Male stablemats have put together, you have to like Dillashaw here. Assuncao has looked like a different fighter at 135 pounds, but he has not had to cope with a multi-dimensional wrestler like this since he faced Dillashaw’s mentor, Urijah Faber, and we all know how that one turned out. The Brazilian will keep it competitive, but Dillashaw has too many weapons at his disposal.

Whitman: Is there any reason -- other than to appease the little sadist that lives inside our otherwise moral souls -- that we should watch Matt Hamill fight Thiago Silva?
Knapp: No, and one would have thought Silva deserved a more meaningful matchup after he dismantled Rafael Cavalcante in June.

Whitman: True or false ... No less than two ambulances will be needed to carry Joey Beltran and Fabio Maldonado to the hospital after they rip each other to shreds. We might as well cut these guys the “Fight of the Night” checks now, right?
Knapp: I prefer not to think about it. I cannot get the beating Maldonado absorbed against Glover Teixeira out of my head and find myself in a perpetual state of concern regarding his well-being. I admire the guy’s heart, but I worry about his brain. Not even a win over Roger Hollett in May could shake those feelings. Go ahead and award another “Brawl of the Night” bonus if you must, so long as I can sit this one out.

Whitman: What the heck is Rousimar Palhares even going to look like as a welterweight? I am skeptical that dropping weight is an answer to Palhares’ inconsistency, especially since he is fighting a grinder like Mike Pierce. Do you think this is going to be a long night for the Brazilian?
Knapp: I cannot come up with a more unpredictable fighter than Palhares or a more predictable fighter than Pierce. Perhaps that is why I find their matchup intriguing. I have long lauded Pierce as a top 10 welterweight, and whether you enjoy his style or not, no one can argue with the results. The key to beating Palhares has always been the ability to avoid his leg locks, and I believe Pierce has enough sense and wherewithal to steer clear. If not, all bets are off.