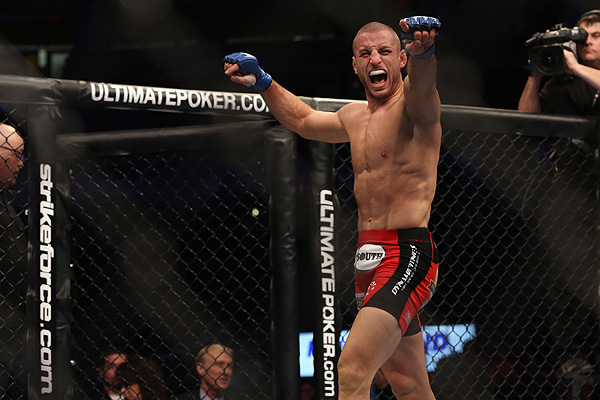 The former Strikeforce champion will step into the Ultimate Fighting Championship limelight for the first time, as he collides with Korean Top Team’s Hyun Gyu Lim in the UFC Fight Night 34 main event on Saturday at the Marina Bay Sands in Marina Bay, Singapore. Lim slides into the marquee matchup as a replacement for the injured Jake Ellenberger.

Saffiedine has won seven of his past eight bouts, losing only to American Top Team’s Tyron Woodley. The 27-year-old Belgian last appeared in January 2012, when he captured the Strikeforce welterweight championship with a one-sided unanimous decision over Nate Marquardt. Anchored at Team Quest, where he trains under former two-division Pride Fighting Championships titleholder Dan Henderson, Saffiedine has gone the distance in each of his last six fights.

A onetime Pacific Xtreme Combat champion, Lim will enter the cage on a seven-fight winning streak. The 28-year-old South Korean last competed at UFC 164 in August, when he knocked out Pascal Krauss with a brutal knee strike and follow-up punches at the BMO Harris Bradley Center in Milwaukee. Lim has put away eight different opponents in the first round.

The UFC Fight Night 34 lineup provides plenty of water cooler fodder. We discuss some of it here:

Whitman: This card lost most of its stateside star power when Ellenberger went down with an injury. Do you think this will significantly affect the success of the event in terms of interest?
Knapp: It hurts to lose a legitimate top 10 fighter like Ellenberger, and the fact that he has a propensity for the jaw-dropping finish -- of his 23 stoppages, 13 have come inside one round -- only deepens the sting. However, his exit allows the UFC to shine its spotlight on Lim, a fighter in the heart of his competitive prime who has put away all seven of his opponents during his current winning streak.

Whitman: After Ellenberger’s injury, UFC matchmaker Joe Silva shifted Lim into the main event slot opposite Saffiedine. Lim is enormous for the weight class and has looked like a boss in his first two UFC appearances, but Saffiedine definitely represents his stiffest test to date. Do you favor him against the former Strikeforce champion?
Knapp: All factors considered, you have to favor Saffiedine because of his big-fight experience, technical acumen and proven durability. “The Sponge” has never been finished, and his title-winning victory over Marquardt a little more than a year ago was a thing of beauty. Saffiedine landed almost twice as many significant strikes as the former King of Pancrase, as he smashed his legs with repeated kicks. Marquardt might as well have been absorbing swats with a Louisville Slugger. With that said, it will be interesting to see how Saffiedine navigates Lim’s five-inch height and better than six-inch reach advantage.

Whitman: Do you think Tatsuya Kawajiri will do some damage in the UFC featherweight division or are we looking at a Norifumi “Kid” Yamamoto situation?
Knapp: What a shame that it took so long to bring Kawajiri to the UFC. At 35, one has to wonder how much longer he can compete at an elite level, but his current five-fight winning streak -- his longest such tear in some eight years -- provides some hope. Kawajiri was wise to downshift to 145 pounds, and while I certainly believe he can win a few fights inside the Octagon, I have a hard time with the idea that he can make real noise in a division where many of the upper-echelon fighters are 30 years of age or younger. We may learn a lot from his debut against Sean Soriano, an undefeated 24-year-old Blackzilians export with plenty to prove. 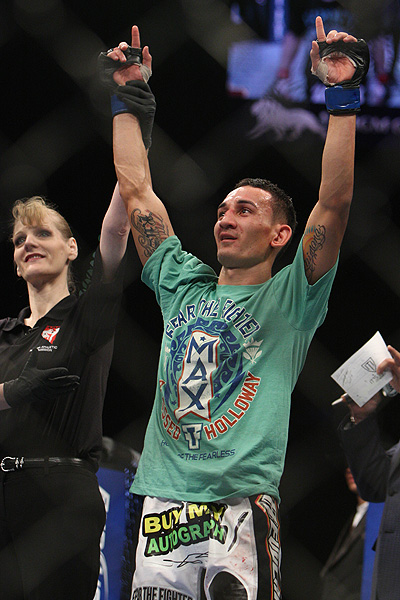 Photo: D. Mandel/Sherdog.com
Holloway has lost two straight.
Whitman: Max Holloway joined the UFC nearly two years ago as an intriguing 20-year-old prospect, but he enters his bout with Will Chope on the heels of back-to-back defeats. If “Blessed” suffers his third straight loss, can we chalk it up to a case of it being too much too soon?
Knapp: There is no shame in losing to the Conor McGregors, Dennis Bermudezes and Dustin Poiriers of the world, but if Holloway falls short against Chope, we have to take a serious look at whether or not we all oversold his talents. This is a fight he needs to win, and this is a fight he should win.

Whitman: Katsunori Kikuno’s unorthodox karate style has given us some thrilling moments as MMA fans. Do you think he could turn into a fan favorite stateside or do you think he will be overmatched against the likes of former King of the Cage champ Quinn Mulhern?
Knapp: Kikuno strikes me as a guy with a limited ceiling in the UFC, where everything depends on matchmaking. However, the longer he sticks around the better the chances are that he fires up one of his dazzling kicks and guts the unfortunate sap standing across from him. Mulhern poses an interesting challenge for Kikuno as an opponent who undoubtedly wants to close the distance and draw the former Deep champion into a battle in the clinch or on the ground. At the very least, this bout will reveal something about Kikuno’s staying power, as he competes in a division where there is no shortage of talented wrestlers and grapplers.

Whitman: Russell Doane put the hammer down on UFC veteran Jared Papazian to win the interim Tachi Palace Fights bantamweight title in his last bout. Do you think Doane has a bright future ahead of him in the UFC?
Knapp: Doane has been a fixture on the prospects worth watching list for years, having captured regional titles in the Destiny MMA, King of the Cage and X-1 World Events organizations. The Hawaiian has delivered 10 of his 12 professional victories by knockout, technical knockout or submission, seven of them inside the first round. Even so, his losses give me pause. Mark Tajon, Michinori Tanaka and Kyle Aguon are not exactly household names, and Doane is playing with the big dogs now. The future is now, and a defeat to Leandro Issa could alter his course.

Whitman: Of all the fighters on the card, who do you think will make the most noise with his performance?
Knapp: In terms of big-splash potential, I have my eyes on Soriano. He has a real chance to upset Kawajiri and establish himself as a person of interest in the UFC’s featherweight division.