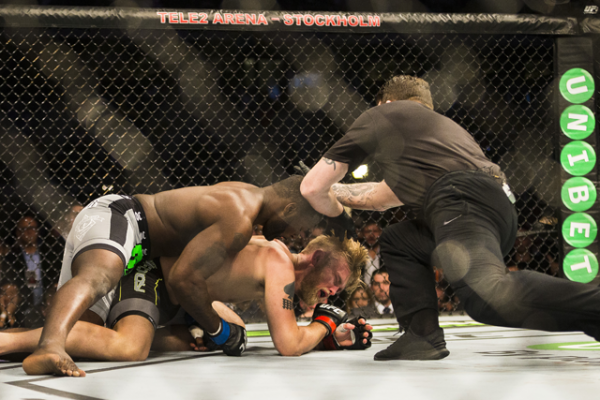 There wasn’t much home cookin’ in Sweden at UFC Stockholm. | Photo: Michael Campanella/Zuffa/Getty/UFC


STOCKHOLM -- The second-best attended Ultimate Fighting Championship event in history is now in the books, and it did not go down the way most of those 30,000 or so fans at the Tele2 Arena thought it was going to play out.

Hometown hero Alexander Gustaffson was supposed to shoo away Anthony Johnson like an annoying gnat and ride into to his rematch against light heavyweight kingpin and top pound-for-pound fighter Jon Jones buoyed by the knowledge that he was the only man to truly test the champion. That screeching sound you heard when Gustaffson was battered into the canvas by “Rumble” was not the DJ putting a halt to the blaring techno music being pumped into the cavernous arena; it was the Gustaffson bandwagon careening into a fire hydrant, crashing through a barrier and falling off a cliff before blowing up in mid-air and scattering into the valley below.

Well, maybe it was not exactly that bad, but it was a rough night for all the Swedish fans in the house. Along with Gustafsson, local fellas Akira Corassani and Nicholas Musoke went down in defeat. Corassani was knocked out in spectacular fashion by bearded clobberer Sam Sicilia in the first round, while Musoke got tattooed over and over again in the second and third rounds of his slugfest with Albert Tumenov. The Swedes wore the collar at UFC on Fox 14, and they went 1-4 the last time the UFC circus rolled into Stockholm. For those of you counting at home, that is a mind-boggling 1-7 over the last two events. So much for the home-cooking theory of picking MMA fights, eh?

Related » Matches to Make After UFC on Fox 14


UFC Senior Vice President and General Manager of Europe, Middle East and Africa David Allen said at the post-fight press conference that the losses will not impact the company’s decision to return to the absolutely stunning city on the Baltic. However, I’m not sure the UFC is going to be able to find any Swedish fighters who want to be on those future cards.

One guy who I am absolutely sure will want to partake in future Sweden events is my new favorite fighter in the whole wide world. Makwan Amirkhani stole the show in the cage, carried it over to his Gong Show of a post-fight interview with Joe Rogan and finished off the hat trick by taking the post-fight presser hostage and refusing to release it. To steal a line from UFC President Dana White: “I don’t know if this kid can fight but if he can he is going to be a star.” Now we all know about whom White was talking when he said that, right? Well, if not, then I will fill you in. He was speaking about Conor McGregor. Yeah, that guy.

In all seriousness, I really hope Amirkhani can scrap. He seems like a great kid and just seems to have that “it” factor. He lives in a two-bedroom apartment with his mom and sister, and his mom sleeps on a mat in the living room. He said he is moving to Sweden to continue his MMA training and plans to use part of his $50,000 “Performance of the Night” bonus to buy his mom a bed. Now we have to see if he can fight. He passed his first test, but it is not like he stomped out a top-20 guy. No offense, but Andy Ogle is now 1-5 in the Octagon. I cannot wait to see if Amirkhani is legit, and I’m sure there will be a whole lot more eyes on him next time out after his debut performance.

In other news, it is great to see Jones embracing his inner heel. He took a few shots at Phil Davis on Twitter after “Mr. Wonderful” lost a close and less-than-spectacular fight to Ryan Bader. I believe the tweet went something like this: “Wonderful? I think it’s time for a new nickname.” The best part of that tweet was UFC welterweight Seth Baczynski’s response, calling Jones “The Darryl Strawberry of MMA” and a “crack head.” Jones’ continued his time-honored tradition of posting something online, only to take it down a few minutes later. This time, it was a jab at the vanquished Gustafsson, who lost a contentious decision to Jones at UFC 165: “Not impressed Alex.” Gustafsson said at the post-fight presser that he thought Johnson was going to beat Jones.

I hate to be the one to pour cold water all over this amazing Anthony-Johnson-goes-from-inflated-welterweight-to-one-of-the-best-light-heavyweights-in-the-world story, but I like Jones big in that fight. I know, I know, all the MMA mathematicians are going to point to the fact that Johnson beat Gustafsson, who gave Jones all he could handle. However, I see it a different way. Word on the street was Jones trained about 10 minutes for the Gustafsson fight, and honestly, that was the time when all the rumors about Jones’ partying were swirling like a hurricane. It was impossible to corroborate back then, but I think his positive cocaine test probably puts any possible doubts to bed at this point. With that said, I have been pretty open about my thinking a Jones-Gustafsson rematch would tell an entirely different tale. Sadly, it does not look like we are going to get it anytime soon. I still think Jones is the best fighter in the world, and I would not make him an underdog to anyone at any weight, outside of heavyweight champion Cain Velasquez.

Johnson does pose a number of problems for the champion. He has light-switch power in both hands and is a tremendous MMA wrestler in his own right. These are things for which Jones will have to account, but I think he is the antidote for just about everyone he might face in the near future. I would worry a bit about Jones’ penchant for fighting to his opponent’s strengths, but he is so creative that it is virtually impossible to prepare for a fight against him. Jones will always break out something else you never expect.

Even so, I am beyond happy for Johnson. This guy has been on a long circular journey and has grown as a fighter and as a person. I spoke with him when I was in Florida before his return to the UFC and asked him about his general demeanor since deciding to move up in weight. Frankly, he was difficult to deal with on occasion, and I could not believe the transformation he had undergone since he accepted the fact that he was a light heavyweight.

Johnson laughed at the question but quickly replied that everything in his life had fallen into place and that he was in a much better frame of mind and much healthier physically. Take that all you I’m-going-to-cut-weight-until-I-find-success guys out there.