Cyborg-Villasenor on for June 19
By Jordan Breen ([email protected]) Tuesday, 9:30 p.m. ET: Robbie Lawler and Jake Shields won't provide the only middleweight main event for Strikeforce in the month of June.

Less than two weeks after Lawler and Shields meet in their 182-pound catchweight headliner on June 6, Strikeforce will stage their second installment of the ShoMMA Strikeforce Challengers Series on June 19 at the ShoWare Center in Kent, Wash., featuring a headlining bout of Joey Villasenor and Evangelista "Cyborg" Santos.

The 33-year-old Villasenor, a pick-up from Strikeforce's acquisitions of EliteXC's assets, hasn't seen action since last May, where he halted brash brawler Phil Baroni in the first frame of EliteXC's "Primetime". Santos, 31, has largely been overshadowed by the growing profile of his talented wife Cristiane "Cyborg" Santos in recent months. While hype has quickly grown for the Cristiane "Cyborg" to take on postergirl Gina Carano, Evangelista "Cyborg" has been on the mend after dislocating his elbow just 22 seconds into his Sengoku middleweight tournament quarter-final with Siyar Bahadurzada last November.

The second edition of ShoMMA will also feature Washingtonian talents Dennis Hallman and Cory Devela, as well as UFC veteran Jorge Gurgel against yet-to-be-named opponents. Afromowitz told Sherdog.com that despite reports of slated bouts pitting Gurgel against Conor Heun and Lyle Beerbohm against Duane "Bang" Ludwig, only Gurgel has been officially confirmed for the card as yet.

The American Top Team standout will spend the first three weeks at home in Coconut Creek before heading to Colorado Springs, Colo., for the final five weeks. He feels the high-altitude training he did in preparation for his fight with Karo Parisyan was beneficial and he wants to employ the same strategy for his five-round title tussle with GSP on July 11 at UFC 100.

Alves is planning on taking some of his teammates with him as well as a full complement of coaches from ATT. Muay Thai coach Mohammed Ouali, wrestling coach Kami Barzini and strength and conditioning coach Andre “Benkei” Ferreira will be making the trip.

“It’s going to be a good camp [in Colorado],” said Alves. ”It’s going to be five weeks. We’ve got our house and everything, and all we are going to do is train and sleep and train.” Speaking with Thiago, it became pretty clear that the impetus for the high-altitude training is the 25-minute length of his championship fight. I think he feels he is the better striker and that if he is going to be able to keep this fight in the upright position, he will have to be in tremendous shape.

It isn’t hard to see how serious he is taking this fight either. He absolutely hated the week he spent in Colorado getting acclimated for the Parisyan fight. Despite that, he is heading back.

“It’s a title shot … I’m going to do everything I can to get there, and Colorado is just another thing that I have to do,” Alves said.

And for those of you looking for an early prediction, the challenger has one to share:

No lie: I could watch David Abbott all day. He appears drowsy and disinterested, but it’s hibernating-bear syndrome: Any perceived infraction could result in tooth loss.

Wisely, UFC production figured following Abbott around with a camera leading into his fight with Frank Mir would be gold, and they were right. Watch “Tank” shuffle around in sandals, tell a henchman to run to the sundries shop and get “Skittles and a Diet Coke” prior to his weigh-in and profess slight impatience for the “monkey bulls---t” of pre-fight politics.

How this man never got his own reality show is a mystery worthy of Robert Stack’s narration.

Reality show springboard, part two: Excised material from John Hyams’ excellent documentary on the substance demons of Mark Kerr was collected and assembled to make a mini-docu, “Fight Day,” which chronicles Renzo Gracie’s preparation for a 1999 bout with Alexander Otsuka.

In addition to Renzo telling stories and training in his Academy, there’s plenty of backstage Pride material, including a very roughed up Wanderlei Silva huffing and puffing and Renzo bravely mocking student/X-Mansion refugee Ricardo “The Mutant” Morais from poolside.

A neat look into the jiu-jitsu philosophy, minus the recurring skin infections.


More UFC Trims: Loiseau, Chonan, Bielkheden
By Jake Rossen ([email protected]) Tuesday, 1:55 p.m. ET: Not a spectacular night for Canada: Following the scratch of Jason MacDonald after a loss to Nate Quarry at UFC 97 in Montreal, Fighter’s Only reports that David Loiseau has also been ousted.


Soszynski/Gusmao for UFC 98
By Jake Rossen ([email protected]) Tuesday, 1:45 p.m. ET: One thing I absolutely hate about MMA: the interminable dead time between fights. The more high-profile the fighter, the more likely he is to take six to 10 months off between bouts. Often, it’s due to irresolvable variables like injury; other times, it’s so promotions can shuffle their deck. Whatever the reason, it stinks, and I’ll stomp my foot like a petulant child about it every chance I get.

Exception: Krzysztof Soszynski, only one month removed from his win over Brian Stann at UFC 97 April 18, has agreed to face Andre Gusmao at UFC 98 on May 23, according to MMA Junkie.

(No cakewalk, either: Gusmao went undefeated in the now-defunct IFL before dropping a decision to Jon Jones last summer.)

Fighters who actually fight -- novel concept. Could catch on. 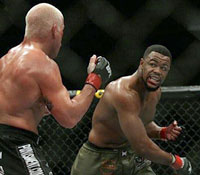 At first glance, the quicksilver, fast-twitch style of Rashad Evans doesn’t exactly jive with the lumbering titan that is Zangief. Besides a shared wrestling background -- though Evans wrestled humans in college while Zangief preferred the challenge of bears -- the similarities are about as abundant as my reserve of patience for Glenn Beck’s tear tantrums. However, anyone who had the misfortune of underestimating Zangief as some dim-witted clod was soon greeted with the “Street Fighter” equivalent of an Evans’ right hook -- the spinning piledriver.

That is what makes these two a perfect match. Both appear relatively harmless, what with Evans’ baby-face smile and Zangief’s leaden movement, but give either of them a chance and you’re on the bullet train to pain. Whereas most mixed martial artists thrive on creating offense from the opening bell, Evans is oddly zen, near standing narcolepsy. The skillful Zangief veteran knows he need only let his opponent chase after him before turning the tables and unleashing an arsenal of moves that would have the entire WWE roster jealous.

Underestimated and underappreciated, that is the common thread in Evans’ career as a fighter and Zangief’s less significant run as a 2-D sprite. Either way, the fans who stuck with Evans and the players who did the same with Zangief look like geniuses right about now.

Check the blog all day for more entries.