No one can argue that UFC 106 was not badly hurt by the cancellation of the heavyweight showdown between Brock Lesnar and Shane Carwin. With no title fight and no championship eliminator on the docket, there was little into which the casual fans could sink their teeth.

Granted, having Forrest Griffin replace Mark Coleman gave the event a boost, but the outcome of his rematch with Tito Ortiz only complicated matters for the promotion. Had Ortiz won, the UFC could have pushed the longtime former champion and flagship fighter back into title contention. Alas, Griffin had other plans.

Analysis follows for the five main card bouts from UFC 106.

What happened: Almost forgotten, “The Ultimate Fighter” Season 7 winner Sadollah learned to stand on his own feet again after his controversial 29-second defeat to Johny Hendricks in August. He re-emerged with an ambitious showing against Baroni, a former Strikeforce and Icon Sport middleweight contender. Sadollah showcased improved striking and punishing clinch work, both of which stem from an extensive training camp in the Netherlands. He also proved to be a better conditioned athlete, as he poured it on once Baroni slowed significantly in the second half of the fight.

Forecast for Sadollah: Despite the career-saving victory, much was lost for the 29-year-old in his defeat to Hendricks. What’s worse, being away from the cage for more than a year killed a lot of the momentum he gained in winning the reality show. In order for fans to rally behind him, the UFC needs to put Sadollah into winnable matchups against marquee opponents -- no easy task. A rematch with Hendricks seems like an obvious choice, but another loss to the highly decorated wrestler could effectively destroy Sadollah’s UFC aspirations. Bouts with Marcus Davis or Damarques Johnson might make more sense.

Forecast for Baroni: Getting the best out of Baroni depends on lining up the “New York Bad Ass” against opponents that are willing to stand up and bang with him. Marcus Davis and Chris Lytle fit the bill perfectly. Some might also find a bout against fellow loudmouth Frank Trigg intriguing.

What happened: Universally recognized as one of the top five light heavyweight fighters in the world following his “Fight of the Year”-caliber battle with Mauricio “Shogun” Rua in June 2005, Nogueira put his world-class boxing skills on display against Cane in a dazzling promotional debut. “Banha” had made a name for himself as a hard-nosed muay Thai specialist, but he was completely outclassed by Nogueira’s technical superiority before being stopped less than two minutes into the match.

Forecast for Nogueira: Despite fighting and beating champions like Tsuyoshi Kosaka, Guy Mezger, Kazushi Sakuraba and Dan Henderson during his nine-year career, major titles have eluded the 33-year-old Brazilian jiu-jitsu black belt. Politics of the business, as well as his reserved character, have certainly played a role in his positioning in the sport. After beating Cane, who stood quite high in the 205-pound packing order, Nogueira could find fights against Thiago Silva and Rashad Evans on the horizon, along with a rematch against Shogun.

Forecast for Cane: After suffering the first legitimate defeat of his career, “Banha” was left to eat some humble pie. Another win would have propelled him into the title picture for 2010, but he now must climb back up the ladder. Such a climb might lead to matches with Forrest Griffin, Keith Jardine and Brandon Vera. A rematch to settle his score with the oft-injured James Irvin seems worthwhile, as well. 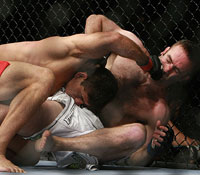 What happened: UFC matchmaker Joe Silva and Vale Tudo legend Wallid Ismail, the man behind Thiago, do not see eye-to-eye when it comes to the once-beaten Brazilian. With that said, Silva had to be gnashing his teeth when he could not come up with a more uncomfortable matchup than Volkmann, the largely unproven 29-year-old promotional rookie. Even though Volkmann managed to put the Brazilian into a couple of awkward positions with his strong wrestling base, he ended up dropping a clear unanimous decision.

Forecast for Thiago: In his third Octagon appearance, Thiago again showed no fight-deciding weakness. He did reveal some problems maintaining dominant positions and lacked some killer instinct, but he may have wanted to play it safe in order to ensure the victory. Fights with Matt Brown and Johny Hendricks or a rematch with Josh Koscheck could be in his immediate future.

Forecast for Volkmann: “Christmas” did well considering his debut on center stage came against a tough, world-ranked opponent on four weeks notice. It seems inevitable that he will be brought back against an opponent with similar experience and skill, perhaps Kevin Burns, Mike Pierce or Rick Story.

What happened: What was supposed to serve as the athletic pinnacle of the event instead turned into a dirty brawl. Johnson took a page from Kazuo Misaki’s playbook when he attacked a downed Koscheck with an illegal knee three minutes into the first round. Koscheck returned the favor with a double eye poke a round later. The American Kickboxing Academy standout took the fight to “Rumble” in the second round, as he put a beating on him on the ground, forcing Johnson to quit mentally and take the exit via a rear-naked choke.

Forecast for Koscheck: He has faced most of the top talent in the welterweight division, and the only matchups that make sense for him involve opponents who are already booked into other bouts or tied up with injuries. That leaves the rematch with Paulo Thiago as the only logical choice.

Forecast for Johnson: As potent as he is offensively, Johnson showed a distinct lack of ability to cope with being pressured -- a situation to which he must grow accustomed as he moves up the ladder in the UFC welterweight or middleweight division. Clearly not yet top 10 material, his next test should come from a group that includes Matt Brown, Jake Ellenberger and Ben Saunders.

What happened: It seems rather remarkable that a fighter as intelligent and hard-working as Ortiz has made so little progress in the past five years. While his wrestling and ground-and- pound remain above average, his ability to fight on his feet can only be described as pedestrian. As a result, Ortiz has not beaten a man not named Ken Shamrock since April 2006. Griffin, though far from dominant, did more damage standing and finished with a strong third round.

Forecast for Griffin: Even though he does not have a good history with the Team Nogueira crowd, his next bout could come against UFC middleweight champion Anderson Silva’s teammate, Antonio Rogerio Nogueira. Alternatives on his road to a second title shot include Brazilian Luis Arthur Cane, a rematch with Keith Jardine or a box office showdown with former divisional ruler Chuck Liddell.

Forecast for Ortiz: The California-based wrestler, who turns 35 in January, has to start accepting the fact that he cannot keep pace with the divisional elite anymore. He may have to turn to fights on the legends circuit in order to taste victory inside the Octagon again. Bouts against former middleweight champion Rich Franklin or Belarusian veteran Vladimir Matyushenko, a man Ortiz defeated in 2001, might be on the radar.