There was visible relief on the faces of UFC brass after their first event of 2010 went well. Picking up on the thread of injuries and withdrawals that plagued UFC 106 and UFC 107, the Jan. 2 show lost a number of superstars, including middleweight champion Anderson Silva, heavyweight king Brock Lesnar and Brazilian legend Antonio Rodrigo Nogueira, to injury.

However, young guns like Junior dos Santos, Sam Stout, Paul Daley and Jim Miller answered the bell and pulled the promotion out of the fire.

Analysis follows for the five main card bouts at UFC 108 “Evans vs. Silva,” which emanated from the MGM Grand Garden Arena in Las Vegas.

What happened: It took dos Santos, a Nogueira protégé, a little more than two minutes to sweep Yvel, a former Rings star, out of the way in a glorified squash match. The 33-year-old Dutchman, who took the fight on four weeks notice, appeared unable to cope with the powerful Brazilian’s work rate from the opening bell, as dos Santos scored with unanswered hooks to the body and overhand power punches. Yvel, having been knocked out just twice in his 50-fight career, was perhaps too confident in his chin and paid the price when Nogueira’s former gardener felled him with counter left hook and sealed the deal with a barrage of shots on the ground.

Forecast for dos Santos: With Yvel out of the way, there may be efforts to put together a fight with compatriot Gabriel Gonzaga, the man dos Santos was originally supposed to meet at UFC 108. Bouts with fellow strikers like Cheick Kongo are also in the Brazilian powerhouse’s future.

Forecast for Yvel: The obvious choice would be to pit “The Hurricane” against Paul Buentello; they were scheduled to meet at Affliction “Trilogy” in August. Some Dutch-on-Dutch violence might work well, too, as Yvel, an Ivan Hippolyte student, could take on Bob Schrijber disciple Stefan Struve in a confrontation between two generations.

What happened: Miller feasted on a returning Ludwig, who had less than two weeks to prepare for this bout. Experts were expecting Miller, a fighter with a known wrestling pedigree, to take down the kickboxer right off the bat, but he instead decided to box with the seasoned pugilist. Surprisingly, it paid off, as he tagged and dropped Ludwig before mounting him and ultimately cinching the fight-winning armbar.

Forecast for Miller: Already quite high in the 155-pound pecking order, there are several fights that make sense for the 26-year-old. Tyson Griffin and Sean Sherk, two men scheduled to fight Miller at UFC 108, top the list. A meeting with American Top Team’s Cole Miller, a victor on the UFC 108 undercard, might also prove intriguing.

Forecast for Ludwig: “Bang” needs to be put into the Octagon against a certain type of opponent, one willing to trade punches but who has not proven as refined on the ground as Miller. Spencer Fisher, Melvin Guillard or Dennis Siver seem like perfect fits.

What happened: Lauzon returned from an 11-month injury break and got off to a strong start, as he threatened with a diving kimura and cut Stout with sharp elbows. As the fight wore on, it became more and more obvious that the Canadian had as much of an advantage standing as Lauzon had on the ground. As Lauzon’s takedowns became less and less explosive, Stout started to dominate the fight on the feet, scoring at will with various combinations. Lauzon mounted a final offensive with two minutes to go in the final round, but Stout easily defended his guillotine choke.

Forecast for Stout: The Shawn Tompkins disciple has proven himself as the best technical kickboxer in the UFC’s 155-pound division. Dennis Siver could be the ideal man to test the chin of Stout, who has never been knocked out. The young Canadian would also be a good test as Takanori Gomi’s first opponent inside the Octagon.

Forecast for Lauzon: As his fight with Stout wore on, it became apparent that ring rust and his lack of top-level wrestling skills were undermining Lauzon’s efforts. It would be in his best interest to pair him with another Brazilian jiu-jitsu player for his next bout. A rematch with Cole Miller or a fight with fellow “The Ultimate Fighter” Season 5 alumnus Nate Diaz sound appealing. 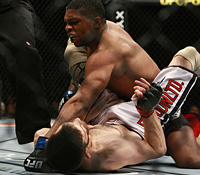 What happened: Daley took advantage of short-notice changes to one of his fights for the second time in a little more than three months, as he blasted Hazelett in the co-main event. Hazelett may be an expert grappler, but he was the perfect opponent for the Nottingham, England, knockout artist. Hazelett had reportedly focused his training on muay Thai in preparation for the bout, but he could not overcome the experience advantage Daley held in stand-up fighting. The KO came with a counter left midway through the first round.

Forecast for Daley: “Semtex” was presented two good opportunities and made the most of them to start his UFC career. Despite his spectacular finishes, he has plenty of detractors who find themselves at odds with Daley’s brash persona and believe he has not yet earned his spot as a welterweight contender. While he has personally requested a shot at Thiago Alves, he may get an even tougher challenge in the form of Josh Koscheck. Similarly heavy-handed and equipped with some serious wrestling chops, Koscheck might be tailor-made to derail Daley.

Forecast for Hazelett: The 23-year-old Cincinnati native may have received a superstar entrance, but, in reality, the matchup with a seasoned professional like Daley -- who has more than 30 fights under his belt -- came too early. Seeing as though he remains one of its most creative ground fighters, the UFC will make certain to rebuild Hazelett carefully. Tests against Brian Foster, T.J. Grant or DaMarques Johnson could be in his future.

What happened: Evans showed he wanted nothing to do with Silva’s punching power, as he took a page out of the book of his teammate, Georges St. Pierre, and dominated the fight with his wrestling. Minimizing the risk of getting hit with the big punch, “The Ultimate Fighter” Season 2 winner ended most of his attacks with a takedown, though he could not keep Silva on the ground. For two rounds, his game plan worked like a charm, but in the third, Silva’s patience snapped, and he baited Evans into an exchange of blows that culminated with a knockdown of the former champion. Lacking the necessary fitness, Silva could not finish Evans on the ground, ultimately losing a unanimous decision in a fight that ended just as it was getting interesting.

Forecast for Evans: Eying a potential bout with his arch nemesis, Evans shut down talk of a rematch with the man who dethroned him -- Lyoto Machida. It now looks like his much-anticipated showdown with Quinton “Rampage” Jackson will indeed materialize, perhaps as early as UFC 113 in May.

Forecast for Silva: It took the young Brazilian just two and a half years to headline his first UFC event. Once there, Silva and his camp showed a shocking lack of strategy and direction for a bout of such magnitude. American Top Team has proven masterful in putting the biggest and strongest fighters into the Octagon, but after Silva’s performance, some questions need answering. Silva could next face Luis Arthur Cane, Matt Hamill or Brandon Vera sometime in 2010.