Want to know how it feels for a marathon runner to collapse inches before the finish line or a mountain climber to fall just shy of the summit? Ask Nate Marquardt.

Most fans and experts agreed that Marquardt, with three dominating performances in a row, had earned himself a second shot at UFC middleweight champion Anderson Silva. His fight against seasoned journeyman Chael Sonnen at UFC 109 “Relentless” on Saturday at the Mandalay Bay Events Center in Las Vegas seemed like just a formality, necessary to kill time and allow “The Spider” to first deal with Vitor Belfort. In mixed martial arts, however, outcomes oftentimes fail to play out to expectation, and Marquardt lost a one-sided decision.

Analysis follows for the five main card bouts at UFC 109.

What happened: Serra landed a right hook to the body, followed with a left-right combination to the head that knocked down Trigg and sealed the deal with a couple of quick punches on the ground.

Forecast for Serra: Serra has plenty of options moving forward, but they all depend on the outcomes of various bouts in March and April. A second meeting with archrival Matt Hughes -- should the former welterweight champion beat Serra’s Brazilian jiu-jitsu instructor, Renzo Gracie, at UFC 112 -- seems most obvious. Other possibilities include a 170-pound title eliminator against B.J. Penn if “The Prodigy” wins decisively over Frankie Edgar at the same event. Other matchups with Matt Brown and Josh Koscheck might also prove feasible.

Forecast for Trigg: There was substantial talk about Trigg calling it quits if he had been released from the promotion following his loss to Koscheck in September. That will certainly not die down now.

What happened: Maia rebounded from his one-punch knockout loss to Marquardt with a workmanlike effort against the former International Fight League champion. Even though both fighters were BJJ black belts, it became evident from the opening bell that Miller wanted nothing to do with the former Mundials and Abu Dhabi Submission Wrestling World Championships winner on the ground. Instead, Maia showed off the improved boxing skills he had hoped to put on display against Marquardt. In a largely uneventful bout, the 32-year-old BJJ phenom earned the nod from the judges, 30-27, 29-28 and 29-28.

Forecast for Maia: Maia’s pedestrian victory, coupled with Marquardt’s loss, may lead to a rematch between the two. Other attractive opponents for the Sao Paulo, Brazil, ground fighting wizard include Yoshihiro Akiyama, as well as the winners of fights pairing Goran Reljic with C.B. Dollaway at UFC 110 and Yushin Okami with Lucio Linhares at UFC Fight Night 21.

Forecast for Miller: After suffering back-to-back losses to top contenders, Miller heads back to the AMA Fight Club to hone his skills. Judging from the Maia fight, his boxing needs the most work. When he returns to the Octagon, Miller could face a mid-level opponent like Tim Credeur, Mike Massenzio or “The Ultimate Fighter” Season 3 winner Kendall Grove. 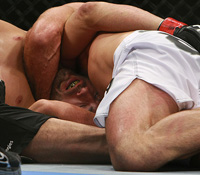 What happened: Thiago showed improved stand-up from his last appearance against Jacob Volkmann. The Brazilian landed solid leg kicks, head kicks and combinations. After an even four and a half minutes, Swick took down Thiago in an effort to steal round one. In the second stanza, Swick landed a stout right hand that staggered the Brazilian, but he ate a counter left hand as he moved in for the kill. On the ground, Thiago, a BJJ black belt, had no trouble finishing the dazed Swick and used a D’Arce choke to do so.


Forecast for Thiago: The next opponent for the Brazilian will likely emerge from one of the many welterweight contests at UFC 111 in March. The frontrunners are Thiago Alves, Martin Kampmann and Ricardo Almeida, should they succeed in their respective fights. A second meeting between the “American Kickboxing Academy Killer” and Koscheck certainly has to be in the cards, as well.

Forecast for Swick: His second consecutive defeat puts the Houston native light years behind in his quest for a title shot. At 30, Swick seems to have lost the form he displayed when he reeled off nine wins in 10 fights between April 2005 and June 2009. “Quick” could next face Kampmann, should the Dane survive his test against Ben Saunders at UFC 111.

What happened: Marquardt smashed several BJJ players following his loss to Silva in July 2007. However, he had not faced a world-class wrestler, and Sonnen, a 5-to-1 underdog, made him pay. The longtime Matt Lindland understudy put his stamp on the fight with takedowns that Marquardt could not stop. On the ground, he relentlessly worked the kind of ground-and-pound that undoubtedly made top wrestlers of yesteryear proud. Marquardt cut Sonnen with a nasty elbow from the bottom and came to life in the waning minutes of the fight. However, his submission arsenal from his back was simply too limited to endanger Sonnen, a former Olympic wrestling alternate who earned a unanimous nod from the cage-side judges.

Forecast for Sonnen: The Marquardt bout was billed as a title eliminator, but questions linger. Does the 32-year-old Oregonian present an attractive matchup for Silva, the reigning middleweight champion? If the UFC can put together the dream bout between “The Spider” and welterweight champion Georges St. Pierre, Sonnen may have to settle for a rematch with Maia instead.

Forecast for Marquardt: Outside of a Silva rematch, which may now be out of reach, few fights make sense for the man who was ranked by many as the world’s number two middleweight before his encounter with Sonnen. Potential foes include Belfort, should he fall to Silva in April, and Okami, should he rebound against Linhares at UFC Fight Night 21. A second bout against Maia also seems plausible.

What happened: He owns one of the most powerful double-leg takedowns in the history of the sport and was revered as the inventor of ground-and-pound. Much to the chagrin of his fans, Coleman used neither in his hall of fame clash with Couture. “The Natural” outboxed Coleman and wore him down in a lopsided first round, then took him down, mounted him and finished him with a rear-naked choke in the second. It left many to wonder what might have been had the fight taken place 10 years ago, as originally planned.

Forecast for Couture: He stated in his post-fight interview that he enjoyed the rhythm of fighting every few months. If Couture wants to maintain such a pace, perhaps he could be added to the super card in the United Arab Emirates in April? As one of the UFC’s biggest pay-per-view draws, there seems to be unlimited options for the 46-year-old at 205 pounds. The unbeaten Ryan Bader and the Brazilian quartet of Silva, Lyoto Machida, Antonio Rogerio Nogueira and Mauricio Rua would provide intriguing storylines if paired with Couture.

Forecast for Coleman: After a performance in which Coleman showed his age, UFC President Dana White suggested his time in the UFC may be at an end. If Coleman still wants to compete, he could conceivably enter Dream’s light heavyweight grand prix in May, if only to recall the monumental success he once enjoyed in the Land of the Rising Sun.