Fight fans took away three revelations from UFC 118 “Edgar vs. Penn 2” on Saturday at the TD Garden in Boston.

First, the lightweight title picture is mapped out for the remainder of the year. Second, a mixed martial artist will beat a one-dimensional fighter 100 times out of 100 if he sticks to the right game plan. And third, B.J. Penn, considered one of the sport’s pound-for-pound greats, may be past his prime.

Analysis follows for the five main card bouts at UFC 118.

What happened: Diaz has successfully used two tune-up fights at welterweight to break out of his slump in his natural weight class at 155 pounds. His fight against Davis resembled the 2009 encounter between his older brother, Nick Diaz, and Scott Smith. For three rounds, he used his reach advantage to beat up Davis on the feet, opening a nasty gash near his right eyebrow with his unorthodox striking techniques. After failing to put the fight on the mat in the first two rounds, Diaz finally succeeded in the third. With 1:45 left to go in the bout, he wrestled Davis to the ground and immediately passed to side control. Davis regained half guard, only to be choked unconscious with the guillotine.

Forecast for Diaz: In the post-fight interview, Diaz expressed his interest in moving back to the lightweight division to take on “[Gray] Maynard and all those who think they’re hotshots.” While “The Bully” has other matters on his hands in the near future, Diaz could take on fellow UFC 118 winner Joe Lauzon or try to avenge one of his other UFC losses to Clay Guida or Joe Stevenson at 155 pounds.

Forecast for Davis: If the UFC decides to keep him -- he has lost three of his past four fights -- it will only be to serve as a potential foil for another one of its young stars, perhaps Anthony Johnson or John Howard.

What happened: A fight that was characterized by tactics lived off suspense and drama, as Maynard did what needed to be done to secure his long overdue title shot. “The Bully” respected Florian’s striking ability, which is why he went back to his bread-and-butter wrestling game for the first time in quite a while. Maynard took down Florian in the second round and worked a couple of elbow strikes from side control, opening a cut on the two-time title contender. Maynard had more in the tank for round three, as he delivered an explosive shot that Florian could no longer defend. He rode out the round from top position to clinch his crack at lightweight gold.

Forecast for Maynard: A rematch with lightweight champion Frankie Edgar -- whom he defeated 2008 as a bigger, stronger wrestler -- could take place as early as December, when it could serve as co-headliner for the forthcoming welterweight title match between Georges St. Pierre and Josh Koscheck. It might also become the main event at the first UFC pay-per-view event in 2011.

Forecast for Florian: With Diego Sanchez back at 170 pounds, the obvious rematch candidate remains out of the picture. “KenFlo” finds himself in a tough spot at 155 pounds, as the UFC might hesitate to match him with one of its up-and-coming title contenders for fear of him defeating them. On the other hand, fighters like George Sotiropoulos, Kurt Pellegrino and Rafael dos Anjos could lend significant credibility to their championship aspirations with a win over Florian. 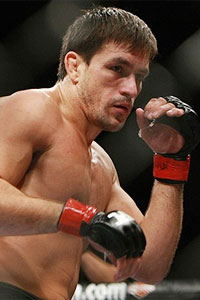 File Photo
Maia is still a contender.
What happened: For three rounds, Maia did everything but finish Miranda. From the opening bell, the ground fighting wizard displayed a hefty advantage on the mat over Miranda, a fellow Brazilian jiu-jitsu black belt, as he thoroughly outwrestled, outgrappled and outmaneuvered the Matt Hume protégé. The highlight of this technical bout was Maia’s improved ground-and-pound attack, which he used as a red herring to advance position. Maia had full mount and back mount several times and attempted a number of armbars but could not put away Miranda. He came closest to finishing the fight in the second round, when he had Miranda mounted but seemingly could not decide where to turn for the submission. He contemplated an inverted triangle choke but instead went for another armbar.

Forecast for Maia: The 32-year-old Brazilian remains near the top of the UFC’s middleweight division. His world-class grappling chops and ever improving wrestling and standup skills make him a difficult match for anybody at 185 pounds not named Anderson Silva. A rematch with Chael Sonnen would have been interesting had the promotion not decided on an immediate return fight between Sonnen and Silva. Perhaps Maia could get another crack at Nate Marquardt after he faces Rousimar Palhares next month. Finally, there may be attempts to put the Maia-Alan Belcher fight together one more time after “The Talent” recovers from eye surgery.

Forecast for Miranda: The AMC Pankration fighter deserves another trip to the Octagon after his gutsy performance against Maia on short notice. Possible future opponents for him include Kendall Grove, Mark Munoz and Kyle Noke.

What happened: Couture, a master strategist, took down Toney right of the bat, mounted the professional boxer, grounded-and-pounded him and pushed him against the cage, unleashing an arm-triangle choke for the submission 3:19 into the first round.

Forecast for Couture: With a quick and easy victory, “The Natural” could return to fight one more time this year. A few names, most notably Mirko “Cro Cop” Filipovic and Lyoto Machida, keep being thrown around in connection with Couture. And the chance of a fourth meeting with fellow UFC hall of famer Chuck Liddell always remains a possibility.

Forecast for Toney: His run in the Octagon looks to have come to an end after just one utterly forgettable appearance.

What happened: When Edgar fought Penn in April, he executed in a similar fashion, outwrestling and outworking the former lightweight kingpin. When he did it this time, one had the impression he did so with a lot more belief in his skills. For 25 minutes, Edgar made “The Prodigy” react to his offensive attack, which included takedowns, good jabs, leg kicks, vastly improved jiu-jitsu and even aggressive ground-and-pound in the championship rounds. Penn got more offense going than he did in the first fight but failed to trouble Edgar, even after he took down the champion in the fourth round and took his back in the fifth. The real disappointment in this rematch was Penn’s corner, which offered little in the way of advice to the challenger.

Forecast for Edgar: A weight disadvantage did not matter against Penn. It will be interesting to see if the same holds true in his rematch with Maynard, a slower but vastly bigger and more powerful version of Edgar.

Forecast for Penn: Having suffered back-to-back losses for the second time in his career, Penn has all options on the table. He could return to the welterweight division, where a rubber match with Matt Hughes might await, or he could simply retire, realizing he can no longer lay claim to the be-all-end-all tag at 155 pounds.