UFC 119 seemed very much influenced by men who put job security first and fought safely, minimizing risk and maximizing their chances to win on Saturday at the Conseco Fieldhouse in Indianapolis.

By installing its bonus system, the UFC has tried to encourage its fighters to push for finishes whenever possible. Perhaps introducing Pride Fighting Championships-style yellow cards and automatic purse deductions for stalling and inactivity could be the solution.

Analysis follows for the five main card bouts at UFC 119.

What happened: A good but not great bout between two lightweights with 28 career knockouts between them went to a close decision. Stephens looked to counter early and scored with a couple of nice leg kicks, while Guillard was a little bit more explosive and found his range quicker. Both threw their punches with full power.

Heading into round three, the fight might have been tied at one round apiece. Stephens increased his work rate and chased Guillard during the last five minutes. The crowd booed because “The Young Assassin” was on his bicycle for most of the round long, riding out the clock. The displeasure from fans grew even more intense when a split decision in favor of the 27-year-old Greg Jackson protégé was announced.

Forecast for Guillard: He has challenged former Pride Fighting Championships lightweight titleholder Takanori Gomi to a fight. The last time Guillard asked for someone specific, he got his wish in form of Stephens, so the possibility exists that we could see the New Orleans native take on “The Fireball Kid” this fall or winter. Other possible opponents for Guillard include the Brazilian trio of Rafael dos Anjos, Willamy "Chiquerim" Freire and Charles Oliveira.

Forecast for Stephens: He entered UFC 119 on a two-fight winning streak, but the controversial defeat at Guillard’s hands dropped Stephens to 5-5 in the UFC. Next in line could be another fighter on the rebound, like Terry Etim, “The Ultimate Fighter” Season 9 winner Ross Pearson or Gabe Ruediger.

What happened: In the “Fight of the Night, Sherk, the former lightweight champion, walked away with a questionable decision. Sherk stuck to his wrestling chops and had one key offensive moment that seemed to sway the judges. Late in the first round, he landed a sharp elbow on Dunham’s right eyebrow, opening a nasty gash that bled profusely during the next two rounds.

Otherwise, Dunham was the one doing effective damage, cinching a couple of tight guillotine chokes and dominating the stand-up aspect of the fight with his reach advantage. Dunham also did a solid job of rising from Sherk’s takedowns and even briefly took his back at one point. The fight ended in spectacular fashion, as Dunham threw everything he had left at Sherk. Still, the former champion would not go down. The crowd largely panned the decision.

Forecast for Sherk: The win, his first in almost two years, puts “The Muscle Shark” back into the extended title picture. It seems possible we will see a rematch with Kenny Florian now. Joe Stevenson and Kurt Pellegrino would also make stout opponents for the 37-year-old wrestler.

Forecast for Dunham: Although the Xtreme Couture Mixed Martial Arts standout suffered his first loss on paper, the performance he gave in the cage against a former champion almost certainly ensures he will be booked as if he had won the fight. Expect him to climb the ladder and fight accomplished opponents. Dunham pitted against Jim Miller might turn into a dream matchup between two young studs. A bout with American Top Team’s Cole Miller could provide a stern test for his ground skills, while Rafael dos Anjos could provide more of a challenge on his feet.

What happened: In a glorified boxing match, Lytle avenged his loss to Serra four years ago -- a defeat that cost him a shot at the welterweight title. Serra kept up with Lytle’s pace in the first round, landing a couple of nice body shots. Lytle used a low stance and cut Serra above the eye with repeated one-twos.

In the second stanza, Lytle’s superiority on the feet became more apparent. He hurt Serra with uppercuts twice and put a real beating on the New York native towards the end of the round. In the final five minutes, the pace slowed considerably. Serra tried his only takedown of the fight, which was easily stuffed. In the end, another fight between Brazilian jiu-jitsu black belts featured not one second of ground work.

Forecast for Lytle: At 36, Lytle is in the best shape of his life. Fighting on the main card in six of his last seven bouts, he has collected “Fight of the Night” honors four times. The 52-fight veteran deserves another top-ranked opponent. A Lytle-Jon Fitch matchup would pit two of the welterweight division’s best-rounded fighters against one another and, given Lytle’s history, almost certainly force Fitch to engage in an exciting fight. The alternative could pit Lytle against the winner of the John Hathaway-Mike Pyle match at UFC 120 next month.

Forecast for Serra: It would be nice to see Serra make another run at his natural weight class -- 155 pounds. As that is unlikely to happen, the much-loved Long Islander will return to his usual schedule of one to two appearances a year inside the Octagon. Possible future opponents for him could include Marcus Davis, American Kickboxing Academy’s Mike Swick and the winner of the forthcoming matchup between Karo Parisyan and Dennis Hallman. 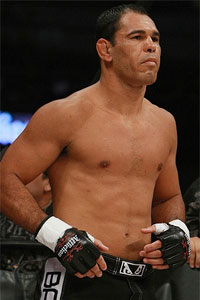 What happened: While injured champion Mauricio “Shogun” Rua looks on from the sidelines, a new pack of challengers is emerging. Bader, “The Ultimate Fighter” Season 8 winner, joined that list with a close decision over former Pride mainstay “Minotoro” Nogueira. Even though Bader has improved his stand-up by leaps and bounds since his appearance on the Spike TV reality series, a huge gap between his skills and those of the accomplished amateur boxer from Brazil was still evident.

Bader snatched the first round with a takedown and some powerful ground-and-pound near the cage. “Lil’ Nog” had the advantage in the second, as he punched Bader around the Octagon. Bader was hesitant to spend more time than necessary on the ground with the Brazilian jiu-jitsu black belt. In the third round, Nogueira did an excellent job of stuffing Bader’s takedowns, and even when he was taken down, the Brazilian stood right up. It appeared as if Bader had to battle with stamina issues, as well. On the wrong end of the stand-up exchanges, he landed a final power takedown to steal the round and, ultimately, the fight.

Forecast for Bader: A meeting with fellow top prospect Jon Jones has been rumored for the past couple weeks. The winner of the UFC 121 matchup between Tito Ortiz and Matt Hamill would also be a strong matchup for Bader. In addition, Bader versus Randy Couture could be an ultimate “changing of the guard” type of match.

Forecast for Nogueira: The twin brother of MMA legend Antonio Rodrigo Nogueira fought well and came close to racking up his eighth consecutive win. “Minotoro” works best against opponents who want to stand and bang with him. As a result, the fans may be treated to seeing him take on the winner of the Brandon Vera-Thiago Silva duel at UFC 125 or the Cyrille Diabate-Alexander Gustafsson matchup at UFC 120.

What happened: For 14 minutes and two seconds, this was arguably the least eventful UFC main event in recent history. Then, just as Mir lured Filipovic into a false sense of security with his “wall-and-stall” strategy, the former UFC champion landed a thudding knee on the former world-class kickboxer, knocking him out cold.

Prior to the knockout, one almost had the impression that some sort of non-aggression pact was in place to make sure Cro Cop was healthy enough to compete at UFC 122 in Germany. For much of the fight, referee Herb Dean was the busiest man in the cage, as he had to separate the two heavyweights more than once after they clinched. The fans booed the lack of action and would have almost certainly welcomed the sight of Dean breaking out some yellow cards.

Forecast for Mir: Despite a knockout over Cro Cop, once the most feared striker in the sport, Mir needs another significant and, more importantly, convincing win before he can apply for another title shot. His rematch against Antonio Rodrigo Nogueira, the original main event for UFC 119, could take place in early 2011 once “Minotauro’s” knee has healed. If Mir wants to fight one more time in 2010, he could conceivably do so against the inventor of the “wall-and-stall,” UFC hall of famer Randy Couture.

Forecast for Cro Cop: Anything is possible for Filipovic. Cro Cop took the fight against Mir on short notice and carried an eye injury into the bout, so UFC President Dana White and UFC CEO Lorenzo Fertitta will still be grateful he fought, even though the performance lacked the necessary steam. The poor showing and resulting defeat effectively killed the momentum he had built with his win over Patrick Barry. If Cro Cop dons his famous checkered flag shorts again, he should be matched with another known name from the Pride era, like Nogueira or Gilbert Yvel, or another legend, like Couture.