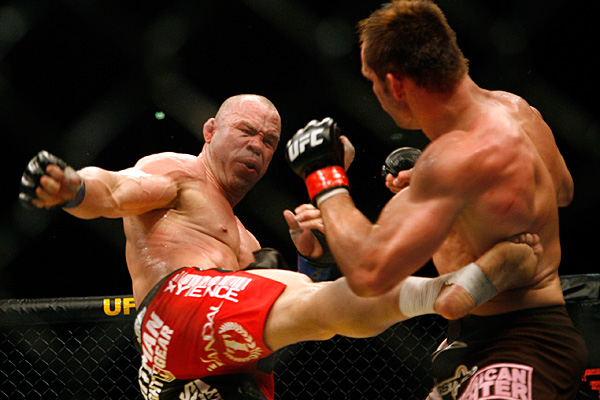 The UFC’s third trip to Brazil in less than a year has been overlooked ever since Vitor Belfort’s unfortunate hand injury and withdrawal. But, despite the main event changeup, two future UFC Hall of Famers will be still facing off in a rematch of feared strikers. To understand how these two match up, we’ll first consider the Tale of the Tape, followed by their career performances in striking and grappling. Finally, we’ll take a look at their first fight in closer detail. 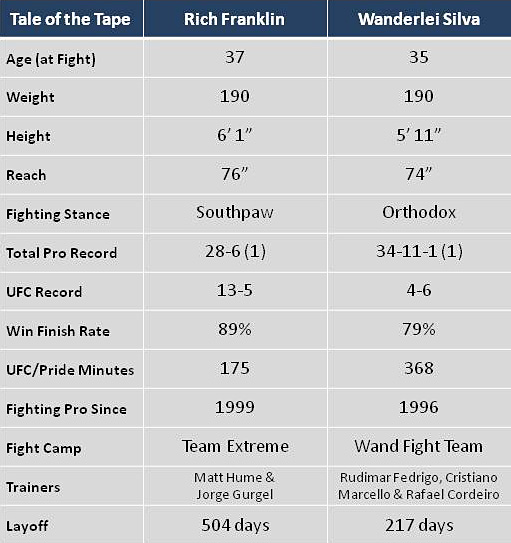 A couple things jump out here. First, the fight will be contested at a 190-pound catch-weight, which mostly has to do with Rich Franklin’s willingness to take this fight sooner than he had anticipated facing Cung Le in July. The shorter training camp means a little less time to come down on weight, but not much. Franklin has always been described as a “company man,” so the 5-pound allowance was the least the UFC could do, and it won’t be an issue for either fighter.

Franklin has a slight size advantage in height and reach, and he’s also a southpaw. These factors give him a slight edge in striking over his smaller, orthodox opponent, but not much.

Perhaps most importantly, both fighters are now in their late 30s. While there’s not much of an age difference between the two -- Silva turns 36 just 10 days after the fight -- both fighters are on the back end of their long and illustrious careers. They’ve each suffered a few knockouts along the way, and age does take an additional toll on knockout resiliency. All that means is that both fighters have a similarly elevated chance of flash knockouts. Considering that these two are predominantly strikers and both have been very strong finishers, that could boost the chances of a (T)KO finish above their last bout three years ago. 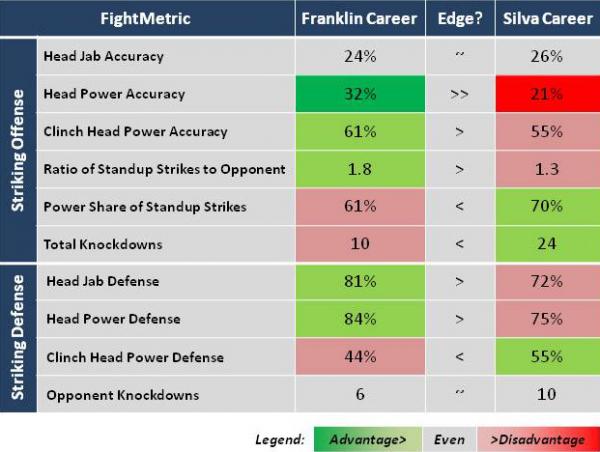 Both fighters have lengthy highlight reels, primarily because of their dangerous striking abilities. But in the long view of performance, Franklin has a more accurate power hand, one that significantly exceeds the UFC middleweight average of only 23 percent. No one doubts the Axe Murderer’s strength and aggression, but Silva will be the less accurate striker in this matchup, and Franklin generally works at a higher striking pace of activity. Also, note that Franklin’s striking defense is better than Silva’s, despite having faced and been bested twice by UFC middleweight champion Anderson Silva.

In this analysis, keep in mind that the numbers for Silva include about twice as much fight time in Pride and the UFC. Even correcting for that difference, we still see that Silva has scored knockdowns at a 20-percent higher rate than Franklin. So, while Franklin has the edge if this goes to a decision, he’s at risk against Silva in the knockout power matchup. We also see from Silva’s extremely high share of power strikes that when he throws, he throws hard.

One thing to note is a slight edge in clinch striking accuracy, something we’ll look at later from their first fight. Of Silva’s 24 knockdowns, nine came from clinch strikes, whereas Franklin hasn’t scored any knockdowns from this position. 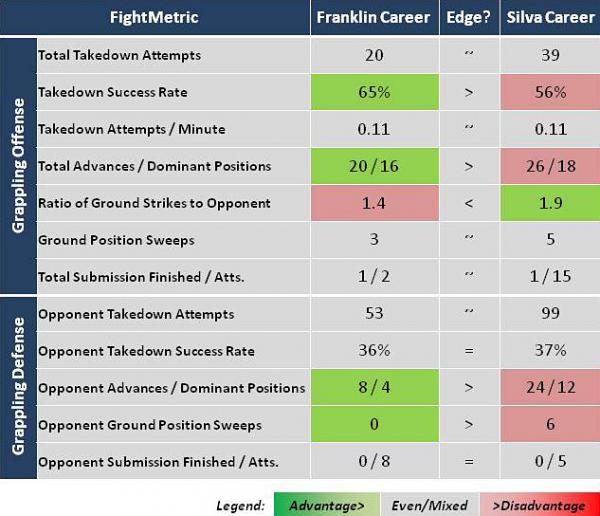 Takedowns and the Grappling Matchup

Neither fighter has spent much time on the ground in recent fights, and each has only one successful submission in Pride or UFC fights, but it would appear that Franklin has the edge in ground control, generally outworking his opponents on the ground while Silva has been evenly matched. Both fighters are experienced veterans, and certainly have balanced training in jiu-jitsu, but a submission would be an unlikely event in this matchup - unless perhaps if first set up by strikes.

Overall, we see that Franklin has an edge in striking and ground control, while Silva gets the better of the clinch. To see if that holds true, look no further than their first fight. 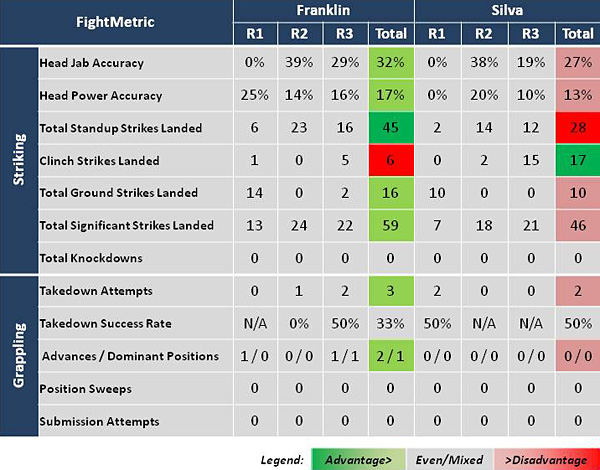 I traveled to Cologne, Germany, for UFC 99 in summer 2009 to see Franklin and Silva square off for the first time. Will history repeat? Will Franklin once again edge out Silva in a close decision? According to the numbers, it depends on where the fight goes.

Franklin got the better of Silva in point striking, landing more strikes in all three rounds, but Silva did use the clinch effectively towards the end of the fight, a position where Franklin had his worst career moments against UFC middleweight champ Anderson Silva. Franklin also had the advantage on the ground, controlling position for more time, landing more strikes and reaching side control in the third round. When Silva began to swing for the fences in the later rounds, Franklin recognized and tried to neutralize the threat by evading and mixing things up.

Silva must have been highly motivated to train for his rematch with Vitor Belfort, and though his emotional drive may not be as strong (or angry) against Franklin, his physical training and endurance may have benefited from his “TUF Brazil” coaching matchup. One bonus that comes along with the new opponent is a huge home-field advantage for the Brazilian.

Brazilians fighting foreigners on the last two UFC cards in Brazil have won 10 of 12 fights. Ten of those fights were on the main card, and the Brazilians finished nine of those 10, including both main events ending by (T)KO. Only one American, Mike Pyle, has been able to overcome the modern Brazilian home-field advantage. But Pyle, like Franklin, is a very experienced veteran of the sport, and therefore perhaps less likely to be rattled by a hostile crowd. Maybe that bodes well for “Ace.”

Franklin started as a slight favorite according to the betting line of -155, which has crept to -170. Given his experienced veteran record -- one that includes numerous overseas performances -- Franklin may have the best shot yet of any fighter to overcome the Brazilian advantage on a main card. We’ll see if Silva tries to exploit Franklin in the clinch, or if either fighter resorts to their ground game. Franklin looks good on paper, but Silva will have the motivational fire to be aggressive as ever in front of his countrymen.

Silva remains the more dangerous power striker, something that he seemed to forget for the first few rounds of his initial meeting with Franklin. The Brazilian will also have five rounds instead of three this time to land some bombs. Either way, expect the same early feeling-out process that occurred last time, as each fighter respects the other’s power. But given the strong finishing instinct of both fighters, they should eventually start swinging for the fences. Unlike submissions, knockout probabilities maintain well throughout the latter rounds in 25-minute fights, so each fighter will have that many more chances to end the fight in spectacular fashion.

What do the numbers tell you? How do you see this going down? Does history repeat with Franklin outpointing Silva? Or will Silva ride the hometown support to keep the Brazilian main event finish streak alive?

Note: Raw data for the analysis was provided by, and in partnership with FightMetric. All analysis was performed by Reed Kuhn. Reed Kuhn, Fightnomics, FightMetric and Sherdog.com assume no responsibility for bets placed on fights, financial or otherwise.