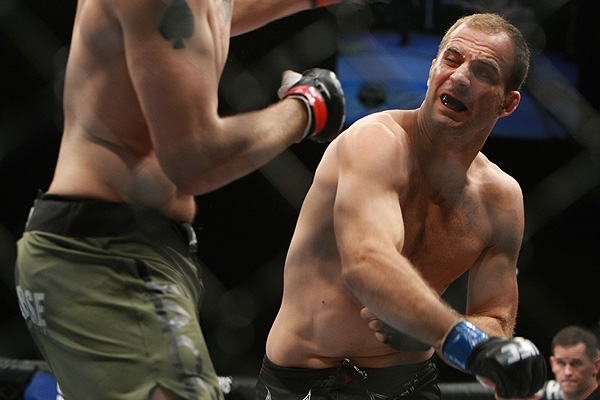 The Octagon returns to the Pepsi Center in Denver on Saturday for a lightweight title rematch between Benson Henderson and Frankie Edgar. In addition to the anticipated headliner, UFC 150 will also see another pair of hard-hitting lightweights collide in the co-main event, as Donald Cerrone squares off with Melvin Guillard.

Prior to the main draw broadcast on pay-per-view, a handful of undercard attractions will set the table on the FX network and Facebook. Here are five reasons to tune in:


Jared Hamman has a great chin, but he needs to stop showing it off.

I am certainly not suggesting that the former light heavyweight allows himself to be hit just to display the burliness of his beard, but it is disconcerting how exposed his standup style leaves him to attacks. A rangy fighter possessing well-rounded skills that compliment his toughness, Hamman still fights a little too upright for my liking, holding his head high and leaving his chin exposed to heavy blows coming over the top, as evidenced in his most recent knockout loss to Constantinos Philippou. “The Messenger” is one tough son of a gun, but a man can only take so many bombs before he eventually hits the canvas.

That statement will hold especially true for Hamman against Dutch prospect Michael Kuiper. Just 23, Kuiper does not possess the most technical striking attack, but the judo stylist attempts to make up for it by swinging for all he is worth. Hamman is probably the favorite here but only if he uses his reach to frustrate his younger opponent, who enters the cage coming off a lackluster performance against Rafael Natal that netted him his first career defeat. Will the 30-year-old EliteXC veteran prove too seasoned for Kuiper, or will the Dutchman let loose and overwhelm Hamman early?


I think the best is yet to come from Dennis Bermudez.

Just 25 years old, the former NCAA Div. I wrestler is still finding his rhythm as a featherweight but showed flashes of excellence in his stint on “The Ultimate Fighter” Season 14, finishing his first three opponents before nearly knocking out Diego Brandao at the finale. Unfortunately for the American, he pursued the finish a bit too aggressively and found himself caught in a deep armbar that dashed his hopes of becoming the next “Ultimate Fighter” winner.

Nevertheless, “The Menace” rebounded from the defeat to take a hard-fought unanimous decision over the lanky Pablo Garza, using his wrestling to neutralize “The Scarecrow,” save for eating some dangerous upkicks. Bermudez now faces once-beaten Jorge Gurgel pupil Tommy Hayden, a 26-year-old Ohioan coming off his first career defeat. Can the Pennsylvanian maintain his momentum and earn back-to-back wins, or will Hayden erase the memory of his first-round submission loss to Fabricio Camoes by upsetting Bermudez?

Ken Stone File Photo
Stone has won his last two bouts.
Will Ken Stone ever truly erase the memories of those brutal knockout losses to Eddie Wineland and Scott Jorgensen?

The 29-year-old took a solid step toward doing just that in each of his last two outings, submitting former North American Allied Fight Series featherweight champion Donny Walker with a rear-naked choke and then edging “The Ultimate Fighter” Season 14 alum Dustin Pague in a split decision at UFC on FX 4.

Stone will now look to make it three in a row against Jackson’s Mixed Martial Arts representative Erik Perez. Just 22, Perez has won six consecutive fights. Like his foe, “El Goyito” last competed against an “Ultimate Fighter 14” alum in John Albert, weathering an early storm from “Prince” before rallying to finish the fight with an armbar.

Both men are gamers, and neither has shown a penchant for beating himself -- a formula that should make for an entertaining contest, regardless of who comes out on top.

A Place for Pague


Much like Stone, Dustin Pague is also searching for a foothold as a UFC bantamweight.

One of the more talented competitors to graduate from “The Ultimate Fighter 14,” the 25-year-old used superior size and standup technique to demolish the undersized Louis Gaudinot in the show’s quarterfinal round, pocketing “Fight of the Season” honors in the process. “The Disciple” was outclassed in the semis, however, as T.J. Dillashaw continually put Pague on his back and pounded away, sending the Virginian packing via unanimous decision.

Since officially joining the UFC, Pague has compiled a 1-2 Octagon record, falling by knockout to castmate Albert at the Dec. 3 finale before earning his lone UFC victory over former King of the Cage champion Jared Papazian at UFC on FX 3. Coming off his split decision defeat to Stone, Pague looks to avoid back-to-back losses by welcoming newcomer Chico Camus to the cage.

Representing the highly regarded Roufusport camp out of Milwaukee, “King” Camus owns a predictably smooth standup game that has netted him four knockouts in his three years as a professional. Camus keeps his feet under him almost all the time and can be effective from both southpaw and orthodox -- the stance from which he uncorks his piston-like right hand. Will Camus’ speed, movement and power allow him to close the distance, or can Pague use his long frame and muay Thai skills to keep Camus uncertain on the outside and wincing in the clinch?

Light as a Feather

Once regarded by many as a seriously skilled but less-than-exciting competitor, “The Carny” has completely turned around that perception following wide-open efforts against Waylon Lowe, Charles Oliveira, Mark Bocek and Evan Dunham. The only problem: his record in those fights was 1-2 with a no contest.

Now the man from Minnesota will make the cut to featherweight to take on Japanese veteran Eiji Mitsuoka, who enters the cage on the rebound after a knockout defeat to countryman Takanori Gomi at UFC 144. The confrontation marks the 145-pound debut for both men. Will either competitor make a splash and send a message to the rest of the division?