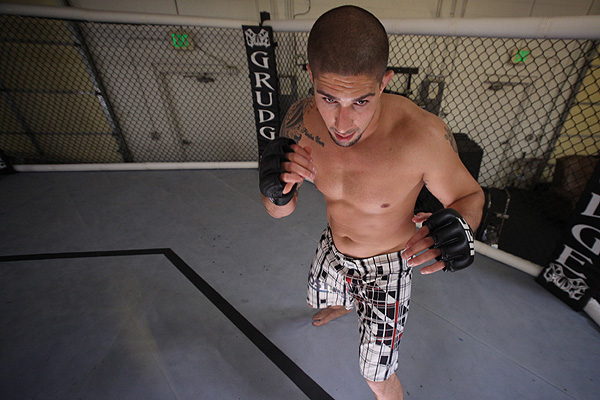 For the first time in the history of the Ultimate Fighting Championship, two women will compete in the Octagon. Headlined by a bantamweight title showdown between champion Ronda Rousey and challenger Liz Carmouche, UFC 157 takes place on Saturday at the Honda Center in Anaheim, Calif., and airs live on pay-per-view.

However, before Carmouche faces the Olympic bronze medal-winning judoka, the UFC 157 prelims will set the stage live on Facebook and FX. Here are five reasons to watch:


What the heck happened to Brendan Schaub? Once a red-hot heavyweight prospect, Schaub has seen his stock plummet in the last year and a half.

Though the heavyweight saw his Octagon debut spoiled by Roy Nelson in the final of “The Ultimate Fighter” Season 10, “The Hybrid” nevertheless responded by rattling off four consecutive victories, besting Chase Gormley, Chris Tuchscherer and Gabriel Gonzaga before bouncing Mirko Filipovic’s head off the canvas like a basketball at UFC 128.

That March 2011 triumph would mark the last time Schaub saw his hand raised, as the Grudge Training Center competitor was put to sleep by two fighters who most believe are past their best days. First came a 3:09 knockout at the hands of former Pride Fighting Championships titleholder Antonio Rodrigo Nogueira, and that setback was then followed by a cruel defeat to ex-International Fight League standout Ben Rothwell in April. After staggering Rothwell with a flurry and rushing him, Schaub found himself on the end of three left hook counters from the 31-year-old, the last of which snapped Schaub’s head around and led to the fight’s finish.

Schaub was supposed to return to the cage to face Lavar Johnson on Dec. 8, but the meeting was postponed when “Big” pulled out of the contest with a groin injury. Can Schaub overcome Johnson’s noted punching power and get back on track or will three straight losses send “The Hybrid” back to the drawing board yet again?


Well-rounded is not typically the first descriptor I use when talking shop about Johnson, but that has not stopped me from picking the big man in each of his last three fights.

As is often the case when making fight picks, I looked marginally intelligent for a bit, until the former Strikeforce standout let Stefan Struve take his arm just 65 seconds into their UFC 146 encounter in May. Still, as Johnson’s punching power remains his most consistently devastating weapon, I think it would be foolish to count him out against much of the division.

This is especially true for his confrontation with Schaub, which could very well turn into a slugfest. Schaub’s takedowns and athleticism are certainly forces with which to be reckoned, but Johnson’s defensive wrestling is not the worst in the division. While I think Schaub probably deserves to be the default favorite due to the stiffer competition he has faced thus far, I would not be surprised if Johnson caught “The Hybrid” with one of his trademark bombs, especially early on. The real question: can Schaub weather the inevitable early flurry and exploit the Californian once he is arm-weary?

Back to ‘The Future’

File Photo
Can Fodor bounce back?
I have been waiting to use that headline since the day Caros Fodor was handed his first loss.

Like several promising prospects before him, Fodor simply hit a roadblock in the form of veteran Pat Healy. This should not be regarded as a failure but rather a learning opportunity. After all, a defeat to a competitor as seasoned as Healy is hardly the end of the world. When everything is said it done, it might turn out to be the best thing that ever happened to “The Future.”

Representing the vaunted AMC Pankration camp out of Kirkland, Wash., Fodor has steadily developed under the tutelage of respected trainer and original Pancrase badass Matt Hume. The 29-year-old began his Strikeforce career in 2010 and rattled off five straight wins inside the six-sided cage. Perhaps most impressive was Fodor’s December 2011 meeting with American Kickboxing Academy representative Justin Wilcox, as he knocked out “The Silverback” in just 13 seconds.

Now standing on the precipice of his UFC debut against veteran striker Sam Stout, Fodor must walk in with a larger gas tank than the one he brought to the Healy fight in March. Can Fodor right his ship and make a statement in his first Octagon appearance?


Michael Chiesa is a tough one to peg. Thus far, I have loved what I have seen, but so many questions remain unanswered. The 25-year-old’s ground game is unquestionably legit, but will he be able to hang onto his undefeated record as he continues to face ever-improving competition?

My personal favorite Chiesa moment came during “The Ultimate Fighter 15” quarterfinals against Justin Lawrence, during which “Maverick” reversed his well-regarded opponent in a tiebreaking third round. The back-and-forth contest quickly turned in favor of Chiesa, with the Washingtonian mounting Lawrence and gradually breaking his will. Chiesa’s official Octagon debut was also a site to behold, as he quickly took favored finalist Al Iaquinta to the mat and put him to sleep with a rear-naked choke.


Dennis Bermudez might turn into a pretty darn good featherweight sooner rather than later.

For one, the guy is ridiculously strong for his size, and he owns punching power for days. If he can continue to improve his standup technique and submission defense, I think we could see “The Menace” crack the contender’s list in the next year.

Though he found himself on the painful end of Diego Brandao’s victory-from-the-jaws-of-defeat armbar in the featherweight final for “The Ultimate Fighter” Season 14, Bermudez responded in a big way last year, outpointing the inconsistent but skilled Pablo Garza before strangling Tommy Hayden with a guillotine choke on Aug. 11 at UFC 150.

Bermudez’s path will surely get no easier against Matt Grice, a 19-fight professional whose lone loss in his last six fights came to the fourth-ranked Ricardo Lamas. Will Bermudez impress in another tough Octagon test?