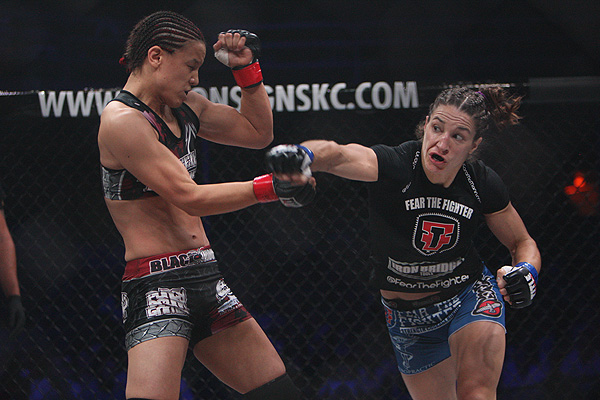 
Citizens of humanity: ask and thou shalt receive. Your main man is back in that galactic driver’s seat with his foot on the gas pedal and an ace up his sleeve. The sportswriter with the biggest arms in the business has finally -- finally -- come back to New Jersey to put a beatdown on the rest of these pathetic media chumps and once again prove exactly why Michael P. Whitman is the ... Uh oh, looks like I slipped into Chael Sonnen Mode again. My bad, you guys. Let me try this one more time.

UFC 159 “Jones vs. Sonnen” takes place at the Prudential Center in Newark, N.J., and is headlined by a light heavyweight title bout between reigning champion Jon Jones and Sonnen, the outspoken challenger who will make his first appearance at 205 pounds since 2005. The pay-per-view broadcast will also see Alan Belcher lock horns with Michael Bisping in an important middleweight co-headliner, while Roy Nelson squares off with Cheick Kongo in a heavyweight showdown. Prior to the pay-to-play option, the undercard airs live on FX and Facebook.

Here are five reasons to catch those prelims:


The UFC’s women’s division is really coming together, as evidenced by the recent flurry of bookings, including Sara McMann’s showdown with Sheila Gaff.

This is good news for MMA fans, unless you do not enjoy watching women fight based on some antiquated moral belief, in which case, you might want to skip down to the section discussing Soviet-born suplex machines.

McMann’s wrestling resume speaks for itself. A silver medalist at the 2004 Olympic Games in Athens, the grappler has used her superior mat pedigree to guide her to a perfect 6-0 professional record. Prior to signing with the UFC, McMann was supposed to face Liz Carmouche in September under the Strikeforce banner, but that bout, along with the event, was canceled due to injury. While several colleagues I spoke to about that matchup heavily favored McMann, I honestly do not believe she was ready for a competitor like Carmouche. However, whether Gaff will be able to stave off McMann’s takedowns and make her pay standing the way I thought Carmouche would is still up for debate.


As evidenced in her recent 10-second demolition of Jennifer Maia, “The German Tank” fights with an urgency rarely seen, regardless of gender or weight class. Was it a dirty win? Perhaps, but the result of that bout is exactly why referees have been telling fighters to protect themselves at all times long before any of us were even born.

Put plainly, Gaff throws hard, heavy and often. Just 23 years old, the rising European standout should not be confused with a precision striker like Germaine de Randamie. On the contrary, Gaff approaches her opponents like Joey Chestnut approaches a plate of hot dogs, hurling furious, wild offense as if her very life depends on obliterating the obstacle in front of her as quickly as possible. Gaff made the cut to 125 pounds in 2011 and has not lost since, recording three wins in less than two minutes combined.

Will Gaff, who now moves back up to 135 pounds, use her rapacious striking attack to overwhelm the comparatively rigid McMann or will her aggression work against her and allow the Olympian to catch her with a well-timed double-leg on the way in?


Nicknames can be funny. Some are announced with a stone-faced resolution, while others are read with one’s tongue firmly placed in its corresponding cheek. Some guys never live up to their monikers, and some find their nicknames uncomfortably inapplicable after time takes its toll. I think it is safe to place Johnny Bedford’s handle into the “serious” category, as the Texan’s Ultimate Fighting Championship performances have left little question as to why he is so aptly referred to as “Brutal.”

First came “Ultimate Fighter” castmate and natural flyweight Louis Gaudinot, whom Bedford destroyed systematically over the course of 12 excruciating minutes. Bedford acted almost as cruel toward “The Ultimate Fighter: Brazil” Season 1 veteran Marcos Vinicius Borges Pancini, whom he stopped with a second-round flurry in past December at “The Ultimate Fighter 16” Finale.

Bedford was initially slated to face Erik Perez at UFC 159, but “El Goyito” was forced to withdraw from the fight in favor of a hospital bed brought on by a serious staph infection -- a development which has resulted in Bedford being paired with fellow “Ultimate Fighter 14” alum Bryan Caraway. Can Bedford maintain his momentum against his new opponent and continue his rise up the bantamweight ladder?

Photo: Keith Mills/Sherdog.com
Villante once held Ring of Combat gold.
How good is Gian Villante? Perhaps a better question is how good can Gian Villante one day become?

Villante’s potential has always been one of the easiest things to like about the New Yorker. This was fine three years ago, when he was undefeated and won the Ring of Combat heavyweight title as a 24-year-old. Those days are past, however, and he will now be forced to sink or swim in the UFC’s light heavyweight shark tank.

Now 27, Villante fought his way through a stretch of three losses in four fights to ride a three-fight winning streak into his UFC debut. A former NCAA Div. I wrestler and middle linebacker at Hofstra University, Villante has never had his athleticism questioned. Still, he has nevertheless shown vulnerability against savvier or more technical opponents, such as Chad Griggs and Lorenz Larkin. I will let you guess which is which.

Though Villante posted victories over Keith Berry, Trevor Smith and Derrick Mehmen to close out his Strikeforce career, he must now produce similar results against better competition if he plans to survive on the sport’s largest stage. That process begins in New Jersey, where Villante faces another Strikeforce import and former NCAA linebacker in Ovince St. Preux. Will Villante show that he belongs in the Octagon?


We need to talk about Rustam Khabilov’s suplexes for a second.

Those belly-to-back joints he hit on poor Vinc Pichel were some of the finest examples of a grown man getting tossed around like a ball of tinfoil that you will find anywhere on planet earth. Take it from me, a man who loves his suplexes: those high-angle masterpieces compare favorably to the best this sport has ever seen. Yes, this includes Dan Severn’s Chris Benoit impression against Anthony Macias and Kevin Randleman’s flying railroad spike of Fedor Emelianenko.

This is nothing new for the sambo expert; he said so himself after his Dec. 15 destruction of Pichel. For further proof of this fact, you may want to scope his belly-to-belly throw that separated Akin Duran from his higher brain functions back in 2009 under the M-1 Global banner.

The Jackson’s Mixed Martial Arts rep must now deal with unbeaten Hawaiian prospect Yancy Medeiros. Can he impress yet again and walk away with his fifth straight win?