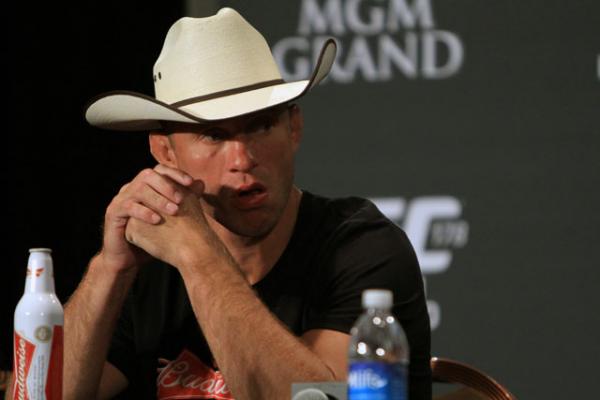 
Donald Cerrone defeated Eddie Alvarez by unanimous scores of 29-28 in the UFC 178 co-main event on Saturday at the MGM Grand Garden Arena in Las Vegas, but everyone came out a winner.

Depending on the lens you use to evaluate the fight, several items were at stake and all carried a fair amount of importance. While the Ultimate Fighting Championship continues to maintain a stranglehold as the elite fighting league in MMA, watching a UFC contender put away a former Bellator MMA champion must have put a few smiles on the faces of people inside Zuffa headquarters.

From that standpoint, the Cerrone-Alvarez clash was reminiscent of Hector Lombard’s debut inside the Octagon at UFC 149, where he lost a split decision to Tim Boetsch. Lombard was expected to win handily. He entered with plenty of hype, and the loss created a series of problems for the Cuban judoka. However, the loss by Alvarez was not nearly as crippling because (a) he lost to a guy who could be next in line for a title shot and (b) looked impressive for a significant portion of the bout.

Switching gears, the Cerrone-Alvarez fight was also reminiscent of B.J. Penn-Matt Hughes at UFC 123 in 2010. Like this fight, that battle was contested as the co-main event; in reality, it was the fight everybody came to see. In fact, that was probably the last time the co-main event had so much more interest than the headliner that followed.

In another sense, this was the fight that finally transformed a longtime threat into a true championship contender that fans cannot wait see scrap for the gold. For years, people expected guys like Georges St. Pierre, Chuck Liddell and Cain Velazquez to get to that point in their careers. Once they did, there was no turning back. Cerrone seems to be reaching that point. Now, he just needs to seal the deal when he finally gets a chance to fight for the strap. Therein lies part of the problem. He may need to fight again before getting his chance.

“As far as who I want next, y’all know how I feel,” Cerrone said, “anyone, anyplace, anytime.”

His talk of wanting to compete again before the year is up should come as no surprise. It was around this time last year that Cerrone started talking about taking six fights in 12 months. He now has five fights since his Nov. 16 submission of Evan Dunham. It is possible he could reach his goal by fighting on the UFC’s Nov. 15 card in Mexico City. Yet, that does seem a little ambitious, even for “Cowboy.” 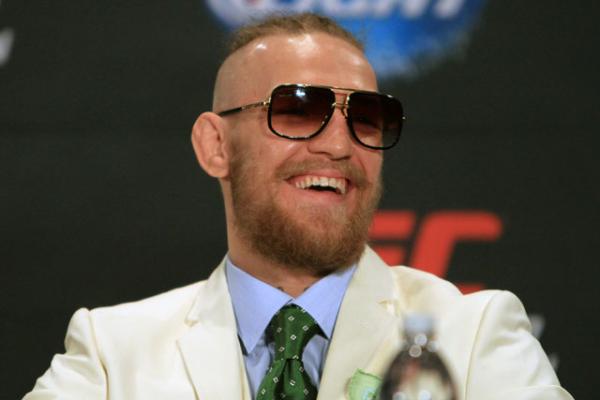 (+ Enlarge) | Photo: J. Sherwood/Sherdog.com
McGregor backed up his words.
There is absolutely nothing generic about Conor McGregor. He just might be the best thing to come along in mixed martial arts in a long, long time. That is not to suggest he is the most talented competitor, but he is an amazing case study in a fighter’s rise to fame.

“You probably doubted me before, but will you doubt me now?” asked the always sarcastic, profoundly confident McGregor following his first-round knockout of Dustin Poirier.

Wearing what he described as an elephant trunk ivory suit, McGregor continued to put on a show at the post-fight press conference, far surpassing his performance in the Octagon in both length and spectacle.

“I love proving people wrong and proving my support right,” he said. “I whoop people for truckloads of cash. How could I hate this life?”

If Las Vegas truly is the fight capital of the world, then the 26-year-old Dublin native likely just captured the attention of all key principles with his dispatching of the highly touted Poirier in just 1:46. For those not familiar, it was exactly what McGregor had been promising for weeks.

Before the fight, UFC President Dana White had his doubts.

“[I was wondering], ‘Why is he predicting a first-round knockout against the No. 5 guy in the world? He’s setting himself up for [failure].’ Now, I’m a believer,” White said. “He did exactly what he said he was going to do. Did I think Conor was going to win? I had no idea. Did I think he was actually going to go out and stop Poirier in the first round? I did not.”

Nearly everything about McGregor is fascinating. He began his walk to the cage from the locker room with a quick sample of Duran Duran’s “Notorious” -- an ode to his nickname -- before the music transitioned through “The Foggy Dew,” by The Chieftains, and into “Hypnotize,” by Notorious B.I.G. With a near-deafening crowd behind him, McGregor soon went to work and some of the fans inside MGM Grand Garden Arena decided to start a “USA!” chant, as perhaps a rebellious retort to the boisterous Irish who came to see one of their own.

McGregor did not disappoint, and one has to think this will be the last time a UFC crowd is not fully behind this charismatic featherweight. He is too cool not to love.

“Shout out to Uncle Frank. I know he wants to see it,” McGregor said, making reference to UFC co-owner Frank Fertitta when asked about a potential title shot next. 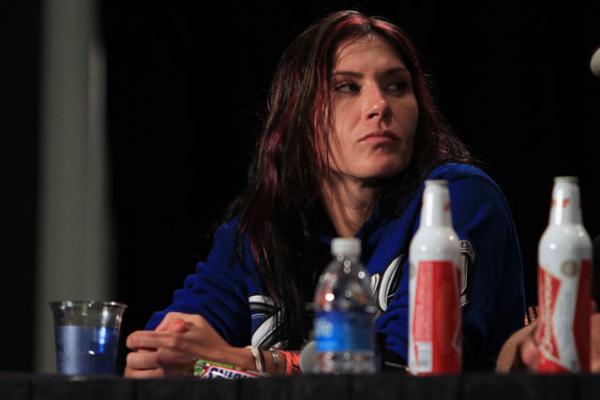 Life is rarely linear, and the 32-year-old Colorado native is a proud survivor of several tumultuous turns over the past two years. Reconstructive knee surgery and the unexpected death of her husband can finally be put behind her. Zingano was originally supposed to coach Season 18 of “The Ultimate Fighter” opposite Rousey in 2013 before fighting her for the title, and she has put all the pieces of her crumbling life back into place. Zingano defeated Amanda Nunes in her return at UFC 178, meaning a title shot is once again in her immediate future.

“She was screaming at me after the fight,” White said. “She ran over and started screaming, ‘Do you see me? Do you see me?’ Yes, I see you. This was the shut up about a Gina Carano fight. I think that’s the statement Cat wanted to make tonight, and she made it loud and clear.”

White added that the company will now move toward a Rousey-Zingano co-main event at UFC 182 on Jan. 3.

As for the fight Zingano just completed, all three judges gave the opening round to Nunes. It could have easily been stopped in the eyes of many cageside observers, as Nunes held top position for much of the round and was crashing down on Zingano with some heavy blows. Zingano came back strong in the second round and eventually earned the TKO stoppage 1:21 into the third.

“She’s [was] out a while,” White said. “She is back. I think the fans needed to see her, and she needed to remind everybody why she was in line for a title shot. She did it tonight.” 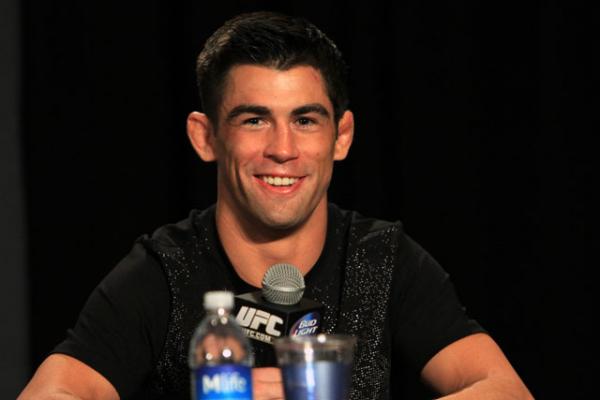 (+ Enlarge) | Photo: J. Sherwood/Sherdog.com
Cruz returned in style.
“Performance of the Night” bonuses went to McGregor and former bantamweight champion Dominick Cruz, who returned from a three-year layoff with a spectacular knockout against Takeya Mizugaki. “Fight of the Night” went to Yoel Romero and Tim Kennedy. No one asked me, but I would have gone with the Cerrone-Alvarez co-main event, though it is admittedly hard to argue with Romero-Kennedy, if only because of the crazy circumstances surrounding its conclusion. In what White described as the “dirtiest trick in the book,” Romero’s cornermen stalled for extra time -- roughly 30 seconds by most counts -- prior to the start of the third round, looking for any way to give their fighter a chance to recover after he was nearly knocked out in the final seconds of round two. Someday, someone will sit down and pen a book featuring highlights from White’s seemingly endless list of post-fight press conference nuggets. One of the absolutely golden moments of the past few years was the line of questioning that followed the stall tactics involving Romero. Specifically, who had custody of the stool? “Who else would be responsible for it, the referee?” White asked. Hearing White discuss the “chain of custody” for a stool was something that will likely make every lawyer out there cringe and laugh, all at the same time ... Cruz, who claimed he blacked out during the Mizugaki fight, said he tries to “go on muscle memory” and that blacking out during a fight is normal. Actually, that does not sound too normal at all, does it? “I’m far from the old Dominick,” Cruz said. “A lot of things are better. Nothing is worse. I’m ready to be back, and I’m ready to have that belt. I’m ready to go out there and have that belt. I never lost it. It shouldn’t have gone in anyone else’s hands, but I was hurt.”