Self-belief has never been an issue for Michael Bisping, and at 36, he remains as confident as ever in his ability to compete at a high level within the Ultimate Fighting Championship.

On the heels of his November submission loss to surging former Strikeforce champion Luke Rockhold, Bisping will meet Power MMA Team’s C.B. Dollaway in a middleweight showcase at UFC 186 “Johnson vs. Horiguchi” on Saturday at the Bell Centre in Montreal. The winner will move on to bigger and better things at 185 pounds.

Long established as one of MMA’s most divisive figures, Bisping understands his place in the sport. “The Ultimate Fighter 3” winner has compiled a 15-7 record since arriving in the UFC in 2006. Those 15 wins tie him for seventh on the promotion’s all-time list, and his 22 appearance tie him for ninth. He has spent more than four hours inside the Octagon.

“I’ve been around the UFC a long time, and that’s because people like to see me fight; and I will be doing just that,” Bisping said. “I will be putting on the best performance of my life.”

Dollaway probably has other ideas. A three-time collegiate All-American wrestler, Dollaway has rattled off four wins in his past six appearances. The 31-year-old last fought at a UFC Fight Night event in December, when he was cut down by a Lyoto Machida body kick in just 62 seconds. The defeat halted Dollaway’s two-fight winning streak.

“I want to keep the fight on the feet and take him out there, as fast as possible, in the most exciting fashion possible,” he added. “I’m still progressing as a fighter. After all these years doing this, I’m still learning and getting better.”

Bisping still has his eyes on an elusive title shot.

“It’s absolutely a realistic opportunity for me,” he told Sherdog.com. “I believe I’m one of the best in the world. I match up well with any of these guys in competition.” 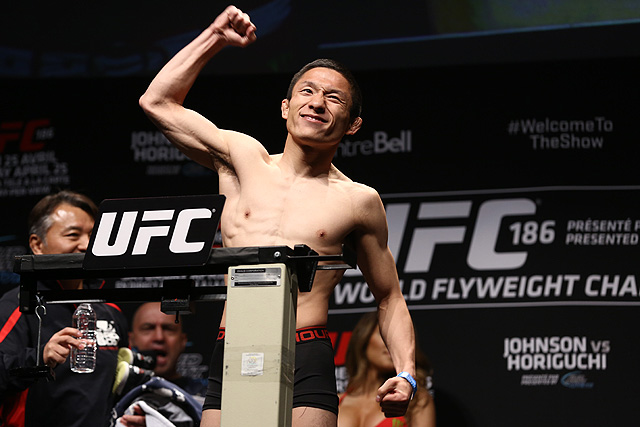 Horiguchi will attempt to become the first Japanese champion in UFC history when he takes on Demetrious Johnson for his flyweight title in the main event. The once-beaten Norifumi Yamamoto protégé will ride a nine-fight winning streak into his battle with one of MMA’s most revered champions and complete fighters.

Johnson, on a run of seven consecutive victories, has never lost at 125 pounds. His only two defeats have come by decision -- to Brad Pickett in 2010 and Dominick Cruz in 2011 -- as an undersized bantamweight. The Japanese challenger does not sound intimidated.

“I’m not thinking about a decision,” said Horiguchi, who has beaten Louis Gaudinot, Jon delos Reyes, Darrell Montague and Dustin Pague on his way to becoming the flyweight division’s No. 1 contender. “I’m going to finish the fight by KO.” 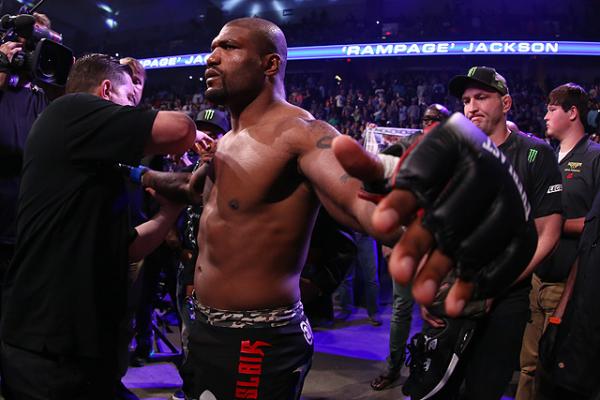 (+ Enlarge) | Photo: Dave Mandel/Sherdog.com
“Rampage” remains a draw.
The 12 events the UFC has staged in 2015 have drawn a total of 150,648 fans and more than $20 million in reported gate revenues ... Quinton Jackson is one of 11 men who have held the UFC light heavyweight crown. Frank Shamrock, Tito Ortiz, Randy Couture, Vitor Belfort, Chuck Liddell, Forrest Griffin, Rashad Evans, Lyoto Machida, Mauricio Rua and Jon Jones are the others ... Shane Campbell has fought in eight different countries as a professional kickboxer and mixed martial artist: Azerbaijan, China, Spain, Canada, United States, Thailand, Belarus and the Netherlands ... Chute Boxe prospect Thomas Almeida sports 16 finishes, 14 of them the first-round variety, among his 17 career victories ... When Joe Riggs climbs into the cage to meet Patrick Cote, eight years, eight months and eight days will have passed since his most recent UFC win ... The five women who have defeated Alexis Davis -- Ronda Rousey, Sarah Kaufman (twice), Elaina Maxwell, Shayna Baszler and Tara LaRosa -- own a cumulative 71-21 record ... When MMA Lab export Bryan Barberena was born on May 3, 1989, the top five songs on Billboard’s “Hot 100” list were Madonna’s “Like a Prayer,” Bon Jovi’s “I’ll Be There for You,” Tone-Loc’s “Funky Cold Medina,” Fine Young Cannibals’ “She Drives Me Crazy” and Deon Estus’ “Heaven Help Me” ... Tristar Gym standout Olivier Aubin-Mercier holds the rank of black belt in judo and brown belt in Brazilian jiu-jitsu ... According to FightMetric, Nordine Taleb in his two UFC appearances has out-landed his opposition 114-57 and 223-101 in the significant strikes and total strikes departments ... Jessica Rakoczy reached the final on Season 18 of “The Ultimate Fighter” in 2013 but has not competed since ... SBG Ireland rep Aisling Daly has delivered eight of her 15 pro wins by submission: five via armbar, two via rear-naked choke and one via guillotine choke.