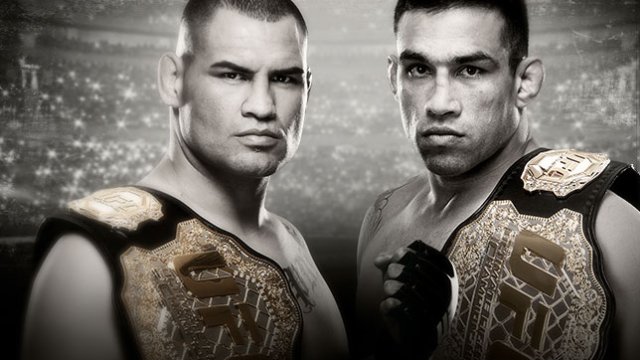 
Time stands still for no man.

Once considered the consensus “Baddest Man on the Planet,” Cain Velasquez has been sidelined for more than a year and half with shoulder and knee injuries. His last appearance was back in October 2013, when he emphatically closed his trilogy against former champion Junior dos Santos. Since his Ultimate Fighting Championship debut as a 2-0 prospect in 2008, the American Kickboxing Academy ace was pegged as a future champion -- a projection he fulfilled two years later when he thumped the belt off of Brock Lesnar. Velasquez has been near flawless in the cage, sans an errant overhand from “Cigano,” utilizing an unprecedented work rate and level of athleticism that no one has been able to solve for more than a round.


Four months before Velasquez was crowned undisputed UFC heavyweight champion, Fabricio Werdum made the leap from a good fighter to a great one when he submitted the seemingly unbeatable Fedor Emelianenko within a single round. After starting his UFC tenure with a 2-2 mark that earned him his temporary walking papers, “Vai Cavalo” has been a force to reckon with upon returning to the promotion, rattling off five straight wins in progressively impressive fashion en route to the interim title. While always toting world-class jiu-jitsu credentials, Werdum has since added top-shelf muay Thai striking to his game under the tutelage of the venerable Rafael Coredeiro at Kings MMA.

This may very well be the most compelling heavyweight clash for the foreseeable future, so let us take a closer look at the Tale of the Tape for the UFC 188 main event on Saturday at the Mexico City Arena in Mexico City: 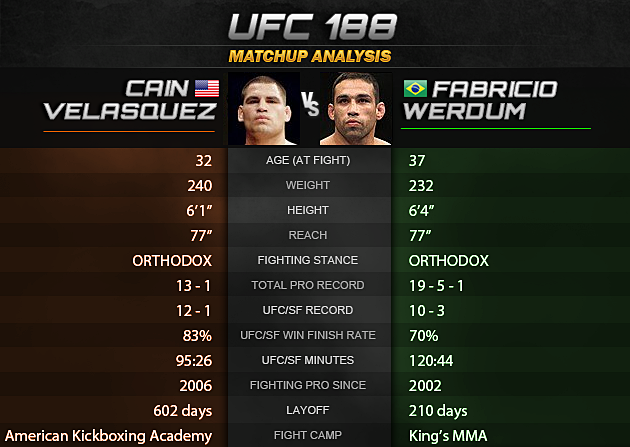 Part of Velasquez’s success has been predicated on the anthropometric challenges he poses. This fight is no different. As the shorter fighter, Velasquez does not give up any reach and will likely come into the fight heavier than Werdum. His stalky frame allows him to manipulate close quarters effectively, his power and lower center of gravity permitting him to brutalize opponents in the clinch or against the cage. Werdum is no slouch when it comes to inside fighting, but few have the comfort in the clinch to get brazen with Velasquez.

Werdum will have to be light on his feet to control the distance and prevent Velasquez from bullying him into the fence, which may be a tall order for the 37-year-old Brazilian. Werdum has been fighting for longer and has logged significantly more time on the professional clock -- especially if you include his six-fight stint in Pride Fighting Championships. Then again, Velasquez may not be as fresh as his youth should entail, given the amount of injuries he has endured; and Werdum has not shown any signs of aging yet, so it is difficult to predict how the age and experience differences might affect the fight, if at all.

The final X factor will be the effects of a prolonged layoff for the defending champion. Velasquez is infamous for his work ethic, which may be an underlying cause of being injury-prone, but there is a big difference between being active in the gym and being active in the Octagon. Werdum, on the other hand, has fought twice since Velasquez last defended his belt; and while that does not rival a Donald Cerrone pace, it is still enough to keep him healthy and fresh in and out of the cage. This is no tune-up fight for Velasquez, and any missteps due to ring rust could pay huge dividends for Werdum, especially if the returning champion’s vaunted cardio has deflated at all.

The Tale of the Tape paints a picture of two very different fighters. Let us take a look at how their physical tools inform their striking: 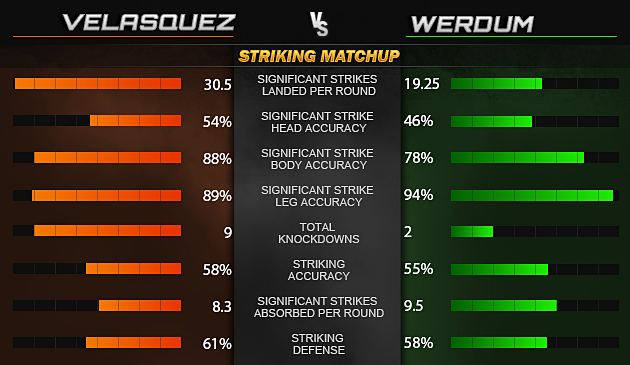 At first glance, it looks as if Velasquez holds a distinct, if not befuddling striking advantage, with a much higher output, greater accuracy, more knockdowns and better defense. However, if we dig a little deeper, it is not as straightforward a picture as that. The key to understanding those stats and understanding how to adjust them for a more honest appearance is to look at Velasquez’s preferred range.

A total of 41 percent of his strikes are thrown at distance, 23 percent in the clinch and 36 percent to grounded opponents. Strikes in the clinch and on the ground, which make up the majority of his striking output, are naturally more accurate than distance shots. Specifically, at distance, his accuracy drops to 40 percent, while clinch and ground strikes boast 73 percent and 70 percent accuracy rates, respectively. This tendency to work the clinch and drum on grounded opponents also explains why Velasquez tends to not eat as many shots. All this to say that Velasquez is not a “pure” striker but rather a seamless phase-shifter who incorporates grinding wrestling and brute physicality to minimize opponents’ strikes, all while maximizing his own output.

Werdum’s striking stands in stark contrast to this. Like most fighters, the vast majority of his strikes are at distance -- 75 percent of them, to be precise -- with clinch and ground strikes taking up the remaining 14 percent and 11 percent. At range, 53 percent of his strikes find their mark, which is a significant improvement over Velasquez’s distance striking given how much more he throws. The real story with Werdum will be how effectively he can dictate the distance. His striking is based in the technical aggression of muay Thai, and as such, he does most of his damage moving forward with varied combinations. That means Werdum’s striking is at a fraction of its lethality when he is pushed to move backwards, which Velasquez will no doubt try to do. Werdum controls distance through slick circular movement, and in order to keep the striking matchup in his wheelhouse, he will have to use his footwork as a muleta to keep the “Brown Pride” brawler at bay.

There is one statistic, however, that Werdum cannot hide from: knockdowns. Velasquez ranks second only to dos Santos among heavyweights in the history of the category. “Cigano,” by the way, also happens to be the only man who has managed to knock down Velasquez. Despite boasting a much more diverse striking arsenal, Werdum flips that ratio on its head, knocking down two opponents while getting unseated five times. Even though “Vai Cavalo” has been able to maintain consciousness in all but one of those instances, it is a dangerous game to play against his younger, more powerful foe.

The striking matchup accounts for plenty of intriguing stylistic contrast, but the differences also carry over to the ground game: 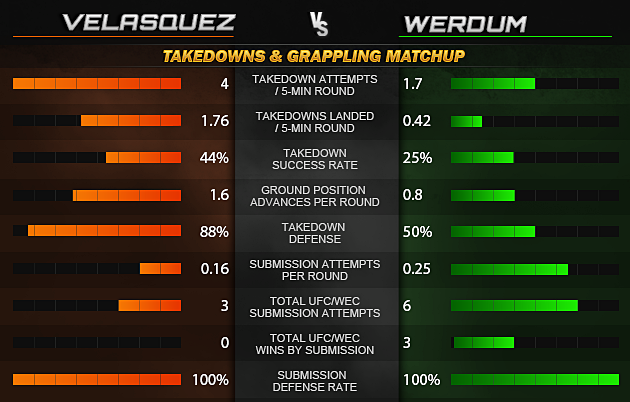 The Brazilian is one of the most decorated and efficient submission stylists in the history of the sport. When he is on the mat, he has a vicious top-game and a formidable guard that can tie up even the most advanced grapplers in the game. Since 2007, everyone that Werdum has tried to submit has eventually tapped, except for Alistair Overeem. He is crafty from virtually anywhere, allowing him to set up submissions without much of a need to advance position. The main issue with his grappling game is his inability to take the fight to the mat at his command; his offensive wrestling is improving but remains serviceable at best. Werdum’s ability to stay upright is statistically shaky, but in his UFC and Strikeforce runs, a mere five fighters have even attempted a takedown and only two of them have been successful. Thus, the 50 percent takedown defense number is a bit misleading due to the small sample size.

Velasquez is, again, a polar opposite. A two-time NCAA All-American wrestler at Arizona State University, he uses chain wrestling and nonstop pressure to eventually drag opponents to the mat. He attempts a takedown every 75 seconds, and even though he does not have a high completion rate, he wears down foes over the course of a fight. Better than almost anyone, Velasquez utilizes his head to stifle opponents and grind against them in the clinch, which frees up a hand to continue punishing them while they try to defend the takedown. In 31 completed takedowns, Velasquez has advanced position 30 times, a jaw-dropping ratio. This is a testament to how quickly Velasquez works, moving from takedown to a dominant position in one fluid motion.

Whether or not Werdum’s jiu-jitsu mastery will be enough to neutralize Velasquez’s perpetual pressure will play an integral role in the outcome of the fight.


A week out from the fight, Velasquez is as much as a -450 favorite, giving him an estimated win probability of 82 percent. That may seem high, but Velasquez has looked dominant enough to warrant such confidence from the oddsmakers. Even at +360, Werdum is a very live underdog here. The old-timer is still learning new tricks, lest we forget the flying knee he launched to cinch the interim belt; and it goes without saying that this is not the first time Werdum has fought a once-defeated fighter who appeared to be invincible. Given the various unknowns, the cavernous stylistic differences and the title of undisputed champion on the line, this has all the ingredients to be a classic fight.