It has finally arrived.

After a rollercoaster ride of press tours, promotional media appearances and an injury-induced postponement, Jose Aldo and Conor McGregor will square off in the Octagon in the UFC 194 main event on Saturday at the MGM Grand Garden Arena in Las Vegas.

It has seemed like a long time since Aldo -- the Ultimate Fighting Championship’s most-tenured champion -- has been active. He was last seen in October 2014, when he defended his title for the seventh time in the UFC -- the ninth if you count his World Extreme Cagefighting run -- against Chad Mendes in one of the best fights of the year. After gearing up for a July 11 showdown with McGregor at UFC 189, Aldo suffered a rib injury weeks before the fight and was forced to withdraw. Assuming everything goes according to plan, this year will be the first time since 2012 that the longtime featherweight king logs only a single fight in a calendar year.


McGregor, on the other hand, has been everywhere in 2015. Be it media appearances, press conference hijackings, coaching on “The Ultimate Fighter” or his two Octagon performances, it has been a breakout year for the Irish star. He was last clocking in for work in July, when he knocked out the perennial prince of the division and late replacement Chad Mendes in the second round. In doing so, “The Notorious” dispatched his most reputed adversary to date. Prior to that, McGregor ran through the overmatched Dennis Siver in January. This will be McGregor’s first year in the UFC where he fights more than twice.

As ubiquitous as UFC promotional hype can be, this very well may be the most anticipated matchup of the year. Here is what the Tale of the Tape tells us: 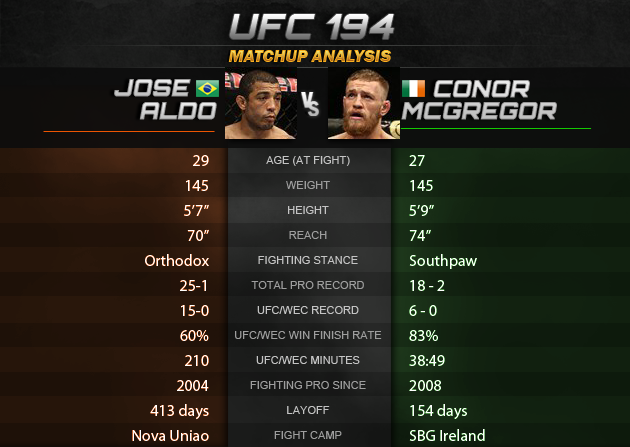 McGregor has the anthropometric advantage as the taller, rangier fighter. He has an imposing physicality for the division and has utilized his range to devastating effect in the past. It is also worth mentioning that he is a southpaw; Aldo has not fought a southpaw since Kenny Florian in 2011. The only other southpaw the Brazilian has fought was Jonathan Brookins in the WEC back in 2008. In this way, Aldo’s rib injury may have been a blessing in disguise, since it gave him a few more months to prepare for fighting a southpaw.

Though only two years older than McGregor, Aldo is much more experienced. He began fighting professionally four years before McGregor and has two and a half times more big-league fights. As a result, Aldo has nearly three more hours of cage time, most of those hours in the incumbent champion’s six fights that went the full 25 minutes; McGregor has never fought longer than 15 minutes. Should the fight go into the championship rounds, it will be interesting to see how the Irishman holds up, especially with his high-volume offense.

There is a flipside to that experience edge, however. Aldo is by no means an old fighter, but his past wars have worn him down in a way that belies his youthful age. Having a recent history of sidelining injuries is a testament to how much punishment he has taken in the past 11 years of training and fighting. McGregor has taken some shots of his own, but nowhere near the amount that Aldo has absorbed. That being said, the 13 and a half month layoff for the Brazilian may negate some of that wear and tear, even if it risks a bit of ring rust. The five-month layoff for McGregor seems like an ideal resting period to stay fresh and rust-free.

If the fight becomes the standup battle for which fans have been clamoring, here is what the numbers have to say: 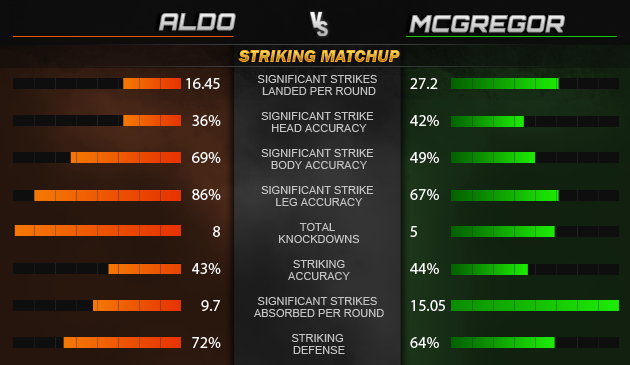 Both Aldo and McGregor are renowned strikers for the division, but they come about their success through very different means. McGregor is naturally a pressure fighter. He keeps his opponents at the end of his long punches and pushes them into the fence to start teeing off, avoiding the clinch and the mat as much as possible unless he is following a downed opponent to the ground. The stats show this pattern: 84 percent of his strikes come at distance, with 13 percent on the ground and a paltry three percent in the clinch. His target is equally lopsided, with 79 percent of his strikes aimed at the head, 15 percent at the body and six percent to the legs. McGregor has scored a knockdown against every UFC opponent except Max Holloway.

Aldo, on the other hand, is a defensive-minded striker. He is a master of angles and distance, using pivots and head movement to bounce in and out of range. He throws devastating punch-kick combinations with power and speed, and he counters efficiently while avoiding takedowns. As opposed to McGregor, Aldo makes much more use of kicks in his striking arsenal: 10 percent of his strikes are leg kicks, with eight percent of his output to the body and 82 percent aimed at the head. Aldo’s preferred distance has a similar arc to that of his foe: 87 percent comes from distance, with 11 percent on the ground and a meager two percent in the clinch. Aldo averages a knockdown in just over half of his fights.

The major difference between the two is in their output. McGregor lands more than five strikes a minute, with slightly greater accuracy than Aldo, who lands a shade over three strikes a minute. Consequently, McGregor eats more shots as well -- three every minute, on average -- while Aldo has much better defense. It is likely that the striking matchup will come down to whether the Brazilian’s efficient counterpunching will work against McGregor’s stifling pressure or if the Irishman will eventually overwhelm Aldo with volume.

If the fight becomes a surprise grappling match, this is what it will look like: 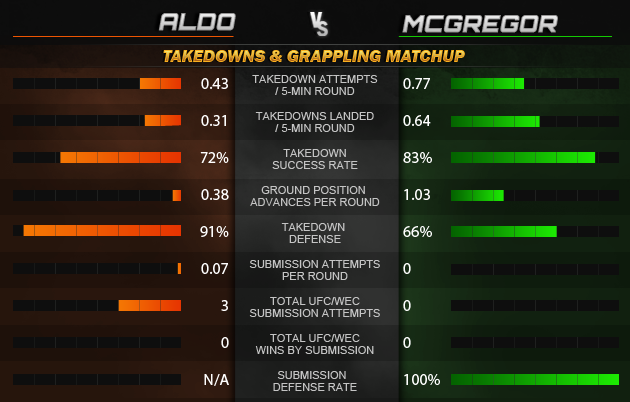 Both incumbent and interim champions are primarily strikers, but they are also skilled grapplers in their own ways. Aldo has some of the best defensive wrestling in the sport and has underrated offensive wrestling when he decides to shoot for a takedown -- which he tends to do once or twice per five-round fight. On the ground, however, Aldo has a smothering top game built on deft, technical passes and heavy punches from dominant positions. He has only attempted three submissions in his Zuffa career, and none of them stuck, but he is a black belt under Andre Pederneiras with legitimate grappling credentials to his name; it bears noting that no one has been able to attempt a submission on Aldo.

McGregor may have answered some questions about his grappling against Chad Mendes, but many still remain. We know enough to comfortably assert that McGregor has solid takedown defense and a good scrambling ability when he does get taken down. While he prefers to put his opponents on the mat with his fists, he has shown solid wrestling technique in his takedowns, as well. Only Diego Brandao has attempted a submission on McGregor, and it was unsuccessful.

All things considered, Aldo has the grappling advantage, but it is probably not an advantage that will fundamentally alter the fight.


This is a volatile betting line, and it will almost certainly continue to be as the fight draws nearer. At the time of this writing, McGregor is the slight favorite, anywhere from -130 to -145 depending on where you look. Oddly enough, the longtime champion Aldo is the underdog for the first time in his UFC career, coming in around the +100 to +118 range. Aside from a dominant champion being the underdog, the closeness of the betting line makes sense: The statistics show an even matchup of two skilled yet very different stylists. Ultimately, it will come down to a bout between McGregor’s offensive firepower and Aldo’s defensive wizardry. It stands to reason that this will be a legacy-defining fight for both of them.