The word “underappreciated” comes to mind when discussing Demetrious Johnson.

Having already dispatched nearly every defensible contender, the man they call “Mighty Mouse” is knocking on the doors of MMA history. He was last seen in September, when he took a clear-cut unanimous decision over John Dodson. That was his seventh title defense, tying him with former featherweight champion Jose Aldo for the fourth-most title defenses in Ultimate Fighting Championship history. In each of those defenses, Dodson was the only one who managed to steal any rounds from him, making Johnson arguably the most dominant champion the UFC has ever seen. He fought twice in 2015; this is his first fight of 2016.


Advertisement
Standing across from him in the UFC 197 co-main event on Saturday will be the highly touted Henry Cejudo. The undefeated prospect and former Olympic gold medalist made his UFC debut in December 2014 and has only fought four times in the promotion. However, he has impressed in each bout, utilizing his athletic and technical gifts to take one-sided decisions every time out. He was last in the Octagon in November, when he beat Jussier da Silva in what was perplexingly judged a split decision. It was the third fight of the year for “The Messenger,” who was dubbed a potential heir to Johnson’s throne in his first UFC fight; this will be the first time he fights in 2016.

Here is what the Tale of the Tape tells us: 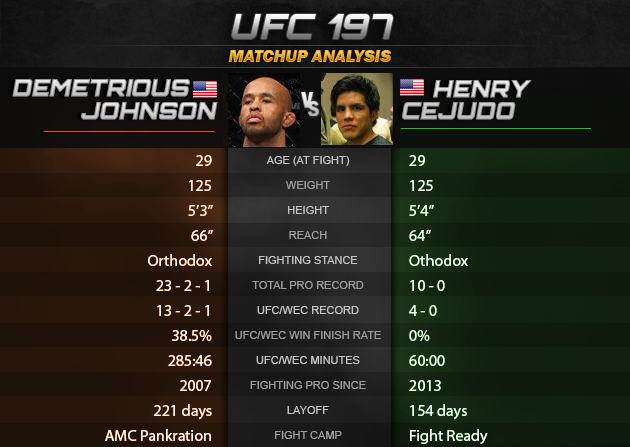 Both men are in similar anthropometric ranges across the board, though Johnson has a slight reach advantage despite being an inch shorter than Cejudo. They are both 29 years of age and show no discernible signs of wear and tear, so the physical advantages and disadvantages they may have are marginal.

The real difference here is in experience. Johnson has been fighting professionally for six years longer and has nearly five times as many Octagon minutes as Cejudo. Said differently, Cejudo only has one more fight in his entire career than Johnson has UFC title fights. That type of experience could be huge, especially since this will be the first time Cejudo will fight past the 15-minute mark; Johnson has seen the championship rounds seven times in the UFC.

Cejudo is no stranger to high-level competition, as he has a stellar amateur wrestling career to his name, but mixed martial arts is a different beast. This is particularly relevant because Cejudo has yet to finish anyone in the UFC, which means he will likely need to have a better five-round process to beat the incumbent champion, which nobody at flyweight has been close to accomplishing thus far. It is also worth mentioning that Cejudo’s UFC opponents have a combined record of 17-17-1 in Zuffa promotions, while Johnson has been fighting and defeating the best of the best, often more than once. 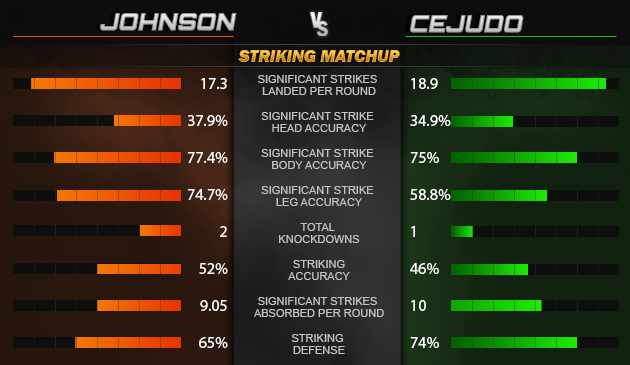 It is always good practice to make note of confounds that potentially distort the numbers. In this case, the fact that Cejudo only has four fights’ worth of statistics -- and all three-round fights at that -- available means that the specific percentages are still in flux, and he could turn in a performance that deviates from these numbers in any given fight. Still, they shed meaningful light on the macro picture of his striking game.

Cejudo strikes in slightly higher volume with slightly less accuracy, but it is hard to tell if he would keep that sort of pace in an extra 10 minutes of fight time. Seven out of every 10 punches is aimed at the head, while 26 percent of his volume is to the body and the remainder to the legs. Similarly, 70 percent of his strikes come from distance, with 23 percent in the clinch and seven percent to grounded opponents. This reflects his general striking style; Cejudo is an in-and-out fighter, utilizing his speed and athleticism to throw combinations to enter into range and then pop back out at an angle or drop levels into the clinch or a takedown.

“Mighty Mouse” strikes in similar trends, though at more balanced levels. Strikes to the head make up 61 percent of his total output, with body shots and leg strikes coming in at 22 percent and 17 percent, respectively. Sixty-nine percent of his of his strikes come at distance, with 25 percent in the clinch and six percent to grounded opponents. He strings together technical punch-kick combinations that lead him into his real wheelhouse: the clinch. In the clinch, he puts opponents under stifling pressure and chews them up with as many limbs as possible.

Both men are relatively hard to hit, due in no small part to their speed and explosiveness, attributes that greatly inform their overall style. The one final stat to make note of is that Cejudo has half as many knockdowns as Johnson in a quarter of the fights. Looking at their careers outside of Zuffa, Cejudo has one less knockout in 16 fewer fights. This is not to say Cejudo is some ferocious knockout artist, but if power favors one man, it favors the Olympian.

Johnson and Cejudo are renowned for their grappling, so let us see how the fight looks once it hits the mat: 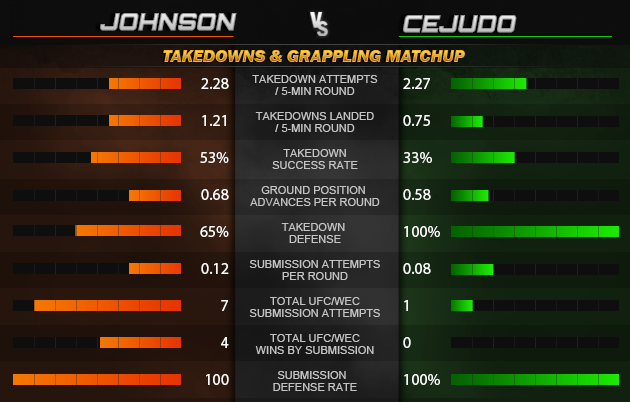 The reigning champion has a diverse grappling repertoire that he uses in conjunction with his striking to forceful effect. Johnson prefers to put his opponents against the fence and control them, unleashing knees and elbows in the process. He shoots for a takedown every couple of minutes and finishes them just over half the time. Once on the ground, he has smooth passing that follows solid ground-and-pound. His submission game is high-percentage and lethal, as he has defended every submission thrown at him and finished everybody he has attempted to submit.

It is always interesting to see how high-level wrestlers transition to MMA, since the skills are no doubt transferable but not always seamlessly so. Cejudo’s stats may not look all that impressive -- he has a fairly low completion rate, especially given his attempts per round -- but they are also a bit misleading. Cejudo uses a variety of different takedowns to keep his opponents off-balance and set up striking combinations. Once on the ground, he tends to be more strike-minded, as he has only attempted one submission during his time in the UFC. Not coincidentally, that submission attempt came against the only opponent he has advanced position on: Chris Cariaso. Still, nobody has managed to take him down, let alone try to submit him.

The real area of intrigue here is whether or not Cejudo will be able to take down Johnson down and if so what he will be able to do there. Beyond that, we have not seen Cejudo on his back yet, and if “Mighty Mouse” can drag him to the mat, we will see a true test of Cejudo’s submission defense.


Predictably, Johnson is the favorite in the range of -365 to -440, though with Cejudo the underdog between +270 and +350, this is the closest the odds have been in a “Mighty Mouse” fight since he fought Joseph Benavidez in 2013. Indeed, Cejudo represents an intriguing matchup, as his athleticism and wrestling talents make him a very credible threat. For Johnson, another step toward claiming Anderson Silva’s record for title defenses is on the line, as he would trail only “The Spider” and George St. Pierre should he notch his eighth. Cejudo has high hopes and expectations to fulfill, as well as the claim of being the first flyweight to beat Johnson -- not to mention becoming only the second champion in the division’s history. Only time will tell which history will be made.