Not so fast, injury bug. The Ultimate Fighting Championship middleweight title will still be up for grabs.

After dethroning Chris Weidman in decisive fashion in December, Luke Rockhold had been gearing up to rematch the man he beat for the title. A neck injury put the bout on hold, and with Ronaldo Souza forfeiting his next-in-line status due to post-fight injuries of his own, Michael Bisping was the logical choice to replace Weidman in the UFC 199 main event on Saturday in Los Angeles. After suffering a devastating loss to Vitor Belfort in his promotional debut in 2013, Rockhold has put together a five-fight, five-finish winning streak, including a dominant second-round submission win over Bisping. Rockhold fought twice in 2015, but this will be his first fight of 2016.


Advertisement
On the other side of the cage will be longtime veteran and “The Ultimate Fighter 3” winner Bisping. He entered the UFC as an undefeated prospect in 2006 and has been fighting at middleweight since 2008, making Bisping one of the longest-tenured fighters on the UFC roster in any weight class. In spite of that, this will be Bisping’s first appearance in a title fight, having lost in high-profile title eliminator matches to Dan Henderson in 2009 and Chael Sonnen three years after. Since losing to Rockhold in 2014, Bisping has won three straight, a streak he capped with a career-defining win over the legendary Anderson Silva in February. Thus, this will be his second fight of the year, matching the number of Octagon appearances he made in 2015. Bisping is the 5/1 underdog with Bet365 …

While this may not be the first-choice title matchup for fight fans, there are intriguing narrative and stylistic elements to it. Here is what the Tale of the Tape says: 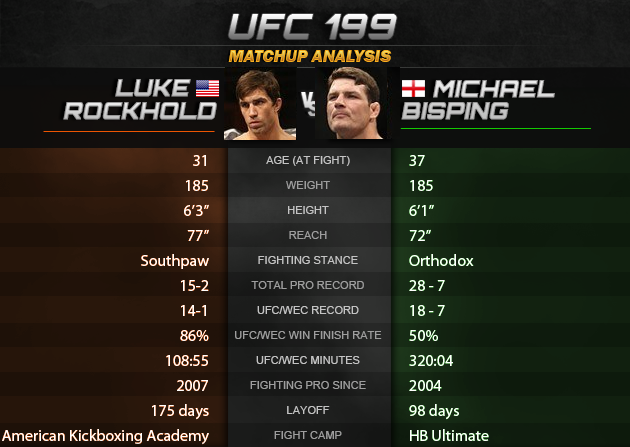 Starting off with the anthropometric matchup, Rockhold has the clear physical advantages. He is taller and comfortably longer, and as the younger fighter, he is also more capable of utilizing his athleticism to accentuate those advantages. Even without his youthful edge, Rockhold is a more natural athlete than Bisping, who has always been good-not-great athletically but has milked his physical talents to the limits of his potential. Still yet, there is something to be said for Bisping’s high-level longevity, and he continues to add new wrinkles to his game this late in his career.

In terms of time-related statistics, Bisping has certainly had a longer career -- he is second only to Frankie Edgar among active UFC fighters when it comes to total Octagon minutes -- but his edge in time logged is not the same as an edge in experience. Bisping has 10 more big-league fights, but if you adjust for the number of bouts that have gone past the third round, they are dead even with three. It bears mentioning that all three of Rockhold’s bouts that went beyond the 15-minute mark were championship fights. This will be Rockhold’s fifth title fight and Bisping’s first.

The only other statistic here to take note of is the layoff. Of course, Bisping is coming in on short notice, and it will be interesting to see how fresh he is under those circumstances. Rockhold, however, has been in another infamously grueling American Kickboxing Academy training camp and has not fought in nearly six months. He has not been out long enough to worry about potential ring rust, but it is feasible that we could see a more worn-down Rockhold after the physical and psychological exertion of a full camp and a last-minute opponent switch to a man he already handily defeated. Meanwhile, Bisping has all the motivation in the world to turn in the performance of his life.

All fights start upright, so here is how the striking numbers line up: 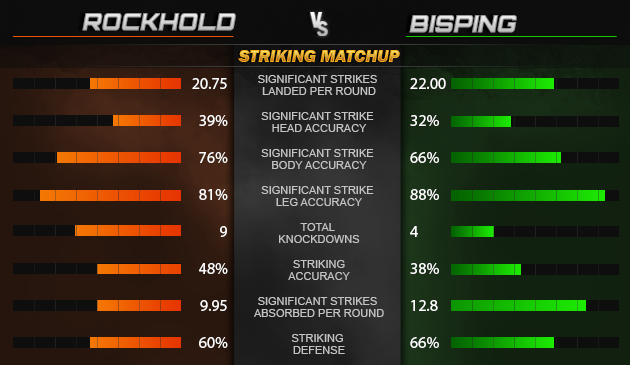 While both men are well-rounded mixed martial artists, they have both found success on the feet throughout their careers. However, they do so implementing very different strategies.

For starters, Bisping has a slightly higher output, and as such, he is slightly less accurate. He also tends to get hit more but only because he is involved in more exchanges; statistically, he avoids more of his opponents’ strikes than Rockhold does. The majority of his strikes, 86 percent, are aimed at the head while body and leg strikes are split evenly at seven percent each. Similarly, 89 percent of his strikes come from distance, with only six percent and five percent from the clinch or to grounded opponents. Despite being a bit predictable in his target and preferred range, Bisping is a savvy combination striker who utilizes a diverse array of strikes in conjunction with his tireless work rate to overwhelm his opponents.

Rockhold, on the other hand, touts a more balanced striking approach. Head shots account for 76 percent of his strikes, while he aims at the body and legs 16 percent and eight percent of the time, respectively. His preferred range is also a testament to his diverse skillset: 69 percent of his strikes come from distance while 10 percent of them are in the clinch and a whopping 21 percent are to grounded opponents. While he is effective at range due in no small part to his reach, he is lethal on the ground, setting up swift passes with big shots to downed opponents in order to get the TKO or submission.

The X factor here is the power differential. In 10 fewer fights, Rockhold has knocked down an opponent nine times compared to Bisping’s four, and Rockhold has only been knocked down once compared to Bisping’s seven. Of course, this includes the knockdown Rockhold scored against Bisping in their first fight, which ultimately led to the submission win for the Californian. This will be particularly important since Bisping is most comfortable picking his shots from distance, where Rockhold will have a significant reach and power advantage. In spite of this, striking is likely the best avenue for the Brit to find success.

Should the fight hit the mat, here is what will likely happen: 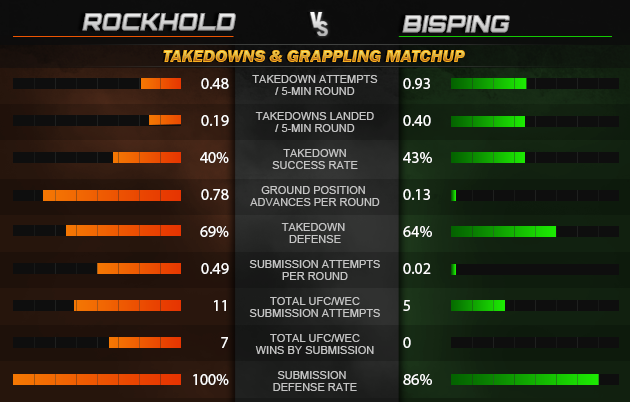 The more time the fight takes place on the ground, the more it slides into Rockhold’s favor. His takedown numbers are not exactly intimidating, but it is important to note that he has only attempted a takedown in five of his fights; and every time he attempted more than one, he managed to complete one. Once on the ground, he is adept at passing into a dominant position, where he rains down punches and hunts for submissions. Chokes have accounted for six of his seven submissions, and only Tim Kennedy has escaped a Rockhold sub and reached the final bell. Only Nik Theotikos in 2008 has tried to submit Rockhold, and he ended up getting submitted in return.

Bisping is by no means a great wrestler, but he has developed effective scrambling and a functional takedown game that compliment his striking. He averages more takedown attempts than Rockhold, and he completes them at a slightly higher rate. On the ground, he is not terribly active when it comes to advancing his position or throwing strikes, and he has never submitted anyone in the UFC. The last time he attempted a submission was in 2009 against Denis Kang. He has evaded almost every submission attempt thrown at him, save for the man he is now facing for the middleweight title. It goes without saying that Bisping will do well to avoid prolonged grappling exchanges.


Given how comprehensively Rockhold dominated Bisping in their first fight, it is no surprise to see the odds favor the defending champion so heavily. He is anywhere between a -850 to -1100 favorite, while Bisping is between a +400 to +700 underdog. As the former Strikeforce middleweight champion and now the UFC titleholder, Rockhold has a real chance to cement his name as one of the greatest to ever do it at 185 pounds, while a Bisping victory would validate a decade-long UFC career that has seen him come up painfully short of a title shot on several occasions -- often to opponents who were legally juicing. Either way, the middleweight division is as deep as it has ever been, and this matchup should be exciting.

Data for the analysis was provided by FightMetric. Eric Stinton performed all analysis. Stinton and Sherdog.com assume no responsibility for bets placed on fights, financial or otherwise.
Related Articles
Latest News
UFCBELLATORPFLONE MORE