Of all the big fights coming up this weekend, this one deserves to be the main event’s main event.

Jon Jones and Daniel Cormier have been the centerpieces of the Ultimate Fighting Championship’s light heavyweight division for the past two years. They were originally slated to fight at UFC 178 in September 2014, but an injury to incumbent champion Jones postponed it to UFC 182 four months later. By then, Jones had already strung together a record-setting seven light heavyweight title defenses, while Cormier was 2-0 at 205 pounds. “Bones” took a clear though at times competitive decision win over Cormier before the UFC stripped him of his title for outside-of-the-cage shenanigans. After a lengthy time away, Jones made his comeback in April, when he coasted through Ovince St. Preux for the interim light heavyweight title. This will be the first time since 2013 that Jones fights more than once in a year.


Advertisement
On the other side of the cage at UFC 200 on Saturday in Las Vegas will be the former Strikeforce heavyweight grand prix champion and current UFC light heavyweight champion, though the latter accolade was only available once Jones was out of the picture. Since losing to Jones, Cormier has won two straight, choking out Anthony Johnson for the title and defending it in a razor-close decision against Alexander Gustafsson. Cormier has solidified his spot as the best 205-pounder in Jones’ absence, but that absence has always loomed over his championship claims, making this a high-stakes fight for his legacy in the promotion and the sport. Since joining the UFC, Cormier has fought at least twice every year, but this will be his first fight of 2016.

There is a lot to unpack in this fight, both from narrative and statistical perspectives. Let us see how the Tale of the Tape can shed some light on the matchup, as Jones is the overwhelming 2/7 favourite with 32Red Australia: 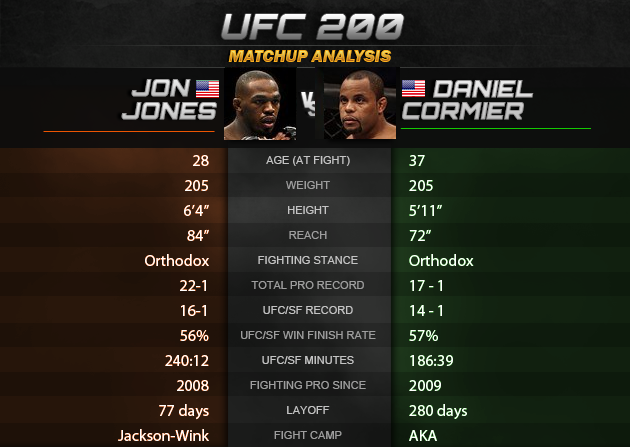 Some stats immediately jump off the page. The age difference is huge, as Cormier is at the point where sudden and drastic physical decline is a distinct possibility. In all fairness, we have not seen anything to suggest that will happen yet, but eventually the two decades of high-level competition will start to catch up. On the flipside, Jones is just starting to enter his physical prime, which is scary to think about since he has already put together the greatest light heavyweight run in the history of the sport. At the same time, Jones has been getting professionally punched in the face for a year and a half longer than Cormier, so the traditional aging curve may not apply cleanly in this situation.

As is usually the case in Jones’ fights, the anthropometric disparities are startling. Jones has a foot-long reach advantage and is five inches taller, making him a tremendous physical labyrinth to navigate on fight night. Granted, Cormier has spent the majority of his MMA career fighting bigger men at heavyweight, which could perhaps mitigate some of these disadvantages. Still, Jones’ physical tools are daunting, especially in the capable hands of Greg Jackson and Mike Winkeljohn.

The final stat to make note of is the layoff. Jones has been active more recently, which is definitely a plus for him after a prolonged absence. On the other hand, it has been nine months since Cormier’s thrilling victory over Gustafsson, and while that is approaching the point of potentially being too much time off, it may also be a net positive for him given his age and the rigorous nature of the Gustafsson fight. Both men are intimately familiar with each other’s games, and since they are coming from two of the elite camps in MMA right now, they should be well-prepared to put on their best possible performances.

Let us see what the specific striking numbers have to say: 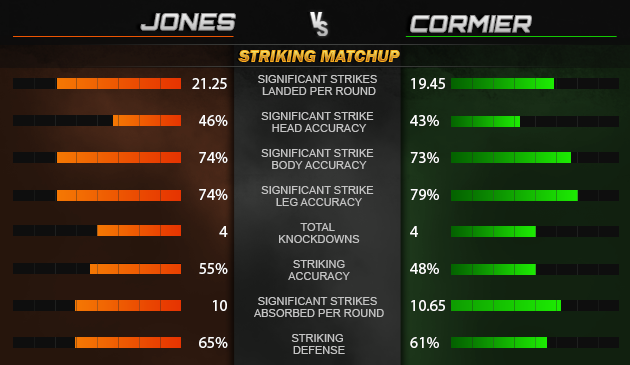 Both Jones and Cormier are on the higher end of output, though their striking styles are very different.

Cormier is a pressure fighter who strikes at his best when he dictates the pace and range of the fight. His wrestling base allows him to fight comfortably in the clinch, where his stout frame gives him ample space to throw strong, short punches and knees. He is primarily a headhunter, where 82 percent of his punches are aimed. He punches the body 11 percent of the time, while the remaining seven percent of his strikes are leg kicks. His range preference is much more balanced: 66 percent of his strikes come from distance, while 19 percent are in the clinch and 15 percent are on the ground. Cormier excels in the pocket and in the clinch, where his wrestling poses a distinct threat. His defense has statistically fallen off slightly since the first fight against Jones, and given the accuracy and output “Bones” brings to the table, it could be a crucial liability for Cormier.

It is hard to overstate the layered nature and complexity of Jones’ striking game. It is a rare instance to see a fighter with greater output, greater defense and more accurate striking than his opponent -- especially at the championship level -- but such is the case in this fight. With an 84-inch reach, Jones can chew opponents up from the outside while they swing at air. If they close the distance, they enter into Jones’ clinch, which is among the most dangerous clinches in all of MMA. Jones attacks with a diverse array of strikes and frequently switches his target. The head accounts for 65 percent of Jones’ total strikes, with 17 percent going to the body and 18 percent to the legs. In terms of range, 69 percent of his strikes come from distance, with 15 percent in the clinch and 16 percent to grounded opponents.

The final factor in the striking matchup is power. Although Cormier has two less fights’ worth of statistics, they both have the same amount of knockdowns or about one every four to five fights. At the same time, Jones has never been knocked down, whereas Cormier has been knocked down twice -- once in each of his last two fights. It is a statistic worth noting, especially with Cormier’s age.

Should the fight turn into a grappling match, here is how the numbers break down: 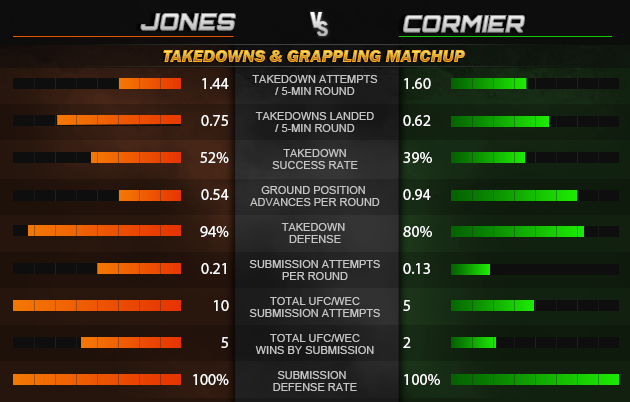 Given the dynamism of Jones’ striking game, it is easy to forget that he comes from a wrestling background. He attempts one or two takedowns per round and completes over half of them. Once he is on the ground, he has a smothering top game predicated less on positional advances and more on ground-and-pound and submissions. His submissions are high-percentage; not only does he have the division’s record for submission wins, but he has finished everyone he has tried to submit except for Glover Teixeira. Jones has only been taken down twice in the UFC -- by Cormier and Gustafsson -- and only Vitor Belfort has been able to attempt a submission on him.

As an NCAA runner up and two-time Olympian, Cormier has a deep wrestling game. He shoots for more takedowns than Jones, though he completes them less often. Once he gets the fight to the mat, he has seamlessly suffocating top control. He tends to work for dominant positions and administer ground-and-pound as opposed to looking for submissions. He has only tried to submit two people in his career, and both times he was successful after a few attempts. Only Josh Barnett has tried to submit Cormier, and nobody else has been in a position to try. Not too long ago, Cormier was renowned for having perfect takedown defense, but he has been taken down in each of his last three fights.


This is a compelling matchup between the two very best light heavyweights on the planet right now. The odds have Jones as the favorite anywhere between -330 and -265, whereas Cormier is the underdog somewhere between +257 and +210. These are wider odds than their first encounter, which seems about right. Even though Cormier is technically the champion, Jones has always been considered the cream of the crop in the division; there is no denying the fact that “Bones” clearly took the first fight. The stakes are high. Cormier needs a win to remove the asterisk from his champion status and validate his name in the history books with the likes of Unibet price the fight at 4/6 to go the distance. For Jones, another win over “DC” puts him that much closer to fully and comprehensively closing out a division like very few fighters ever have. It has been 18 months since they first met in the cage, and a lot has happened since then. Soon, we will see if enough has changed to make the outcome of the rematch any different.