Robbie Lawler has been busy stringing together an unprecedented spree of classic fights. Most recently, he took a controversially close split decision in a back-and-forth affair with Carlos Condit on Jan. 2. Before that, he authored a signature win in an all-time great bout against Rory MacDonald in July 2015, which was his first title defense and only fight of the year. The unlikely late-career resurgence for the longtime vet has been a true feel-good story; prior to his return to the UFC, Lawler went 3-5 in Strikeforce with several uninspired performances. Now he is two wins away from tying the title defense record of mentor and former coach Pat Miletich.


Standing in his way at UFC 201 on Saturday in Atlanta is fellow Strikeforce alum Tyron Woodley. The NCAA All-American wrestler has had a sterling-if-not-slightly-underappreciated career thus far. After failing to capture the Strikeforce welterweight championship in 2012, Woodley has gone 5-2 in the UFC, losing only to Jake Shields and Rory MacDonald, the former a much-maligned split decision loss most felt was a robbery. Despite being among the elite welterweights for half a decade, “The Chosen One” has surprisingly little to show for it, making this a high-stakes bout for him. Woodley has not fought since UFC 183 in January 2015.

Here is what the Tale of the Tape has to say: 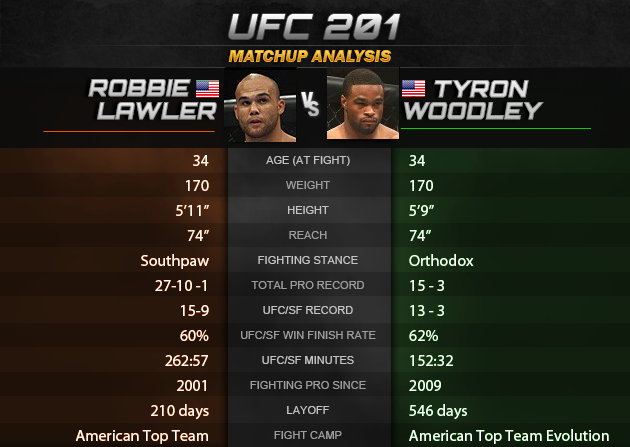 Anthropometrically, there is very little separation between Lawler and Woodley. The incumbent champion is two inches taller, but to borrow a phrase from our good friend Mike Goldberg, everything else is virtually identical. There are, however, a few other surprises here.

First, the disparity in experience is shocking considering both men are the same age. Lawler started fighting professionally eight years before Woodley and has logged almost two additional in-cage hours in the UFC and Strikeforce; and that is not counting his several legitimate bouts in Icon Sport, Pride Fighting Championships, the International Fight League and EliteXC. On top of that, Lawler has fought past the third round five times now, going 4-1 in those fights. Meanwhile, Woodley is 0-1 in fights that have seen the championship rounds: He was knocked out in the fourth round by Nate Marquardt. While Woodley is definitely a seasoned veteran, you have to give the experience edge to Lawler.

Although the stance difference might leap out to some as a potential advantage for Lawler, it is important to also note that Woodley is 4-0 against southpaws, which includes his last two wins against Kelvin Gastelum and Dong Hyun Kim. It is also important to clarify that even though both men rock the American Top Team tag, they are not actually teammates; Woodley’s gym is an offshoot of ATT based in Missouri, while Lawler trains in the original Florida gym.

The final area of which to make note is the layoff. As Lawler is wont to do, he has been more active in the last two years, whereas Woodley has been out for a year and a half. That kind of layoff is not a definitive disadvantage, but it is definitely long enough to be potentially harmful.

The fight should take place mostly on the feet, so here is how the standup numbers shake out: 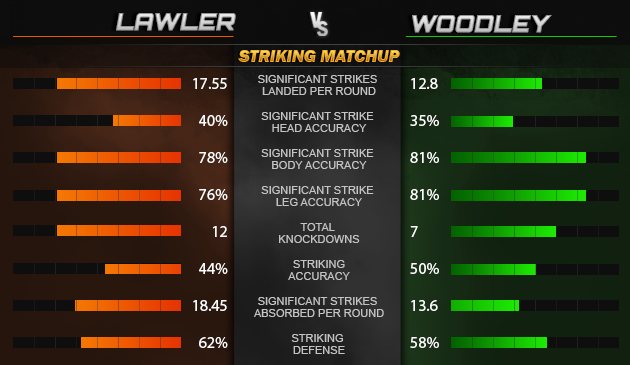 It should come as no surprise that the defending champion will want to keep the fight standing. The “Ruthless” one is a ferocious headhunter, throwing 88 percent of his strikes upstairs, while the body and legs account for nine percent and three percent, respectively. Furthermore, Lawler tends to strike at range and in the pocket; 79 percent of his strikes come at distance, while 13 percent are in the clinch and eight percent are to grounded opponents. Although it looks strange to see that Lawler has better striking defense while absorbing more significant strikes per round, that is an indication of his willingness to engage in prolonged exchanges; he gets hit more because his opponents are throwing more at him.

At the same time, Woodley is by no means a slouch in the standup department. His output is less than Lawler’s but also more balanced. He targets the head 67 percent of the time, while the body makes up 25 percent and legs represent eight percent of his total strikes. Expectedly, his preferred ranges are also more evenly distributed: 63 percent of his strikes come at distance, while the clinch and ground strikes make up 24 percent and 13 percent. While Woodley does tend to be more hittable in prolonged striking exchanges, he mitigates that by mixing his attacks and taking a more conservative approach compared to Lawler’s pressure and aggression.

The main thing to look for here is Lawler’s mixture of power and work rate. In his 24 fights in the UFC and Strikeforce, “Ruthless” has 12 knockdowns, and it is worth noting that nine of those fights happened at weight classes above 170 pounds. That power combined with the fact that Lawler will land nearly 24 more significant strikes than Woodley over the course of five rounds makes for a deadly combination. Then again, Woodley packs a punch, as well, and with the greater amount of career wear and tear on Lawler, the pocket exchanges that have made “Ruthless” a fan-favorite could very well lead to a sudden undoing at the hands of “The Chosen One.”

It will be a don’t-blink kind of standup affair, but should it hit the mat for a reason other than a knockdown or knockout, here is what the matchup will look like: 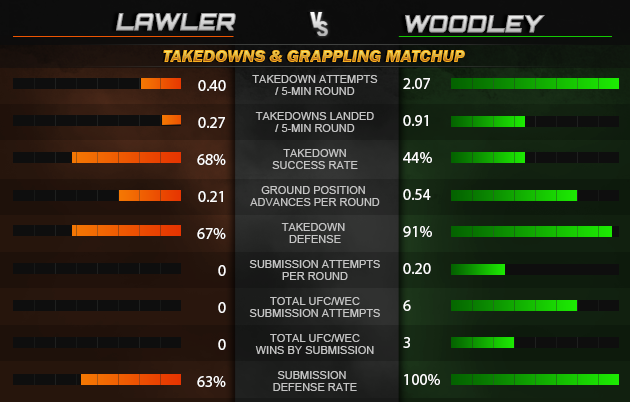 As a two-time NCAA All-American and Big XII Conference champion at the University of Missouri, grappling is clearly Woodley’s wheelhouse. Aside from the fact that he rarely gets taken down -- only MacDonald and Marquardt have done so in the past five years -- Woodley attempts a takedown roughly every two minutes and completes nearly half of them. Once on the ground, he is active in throwing strikes and advancing position. “The Chosen One” has not attempted a submission since fighting Nathan Coy in 2010, but he has proven that he has legitimate, high-percentage submission chops when he chooses to use them.

Lawler, on the other hand, is more of a defensive wrestler and scrambler when it comes to grappling. With that being said, he has a solid success rate when he does try to take down his opponents, and even though his takedown defense percentage does not look great, he is rarely controlled on the ground and often pops up to his feet quickly. When he is on the ground for an extended period of time, he tends to be content to throw strikes from whatever position he is in as opposed to advancing. More interestingly, Lawler is the rare example of a fighter who has literally never attempted a submission in his career.

If Woodley can manage to take Lawler to the ground, it would pose a real opportunity to win the fight. Lawler has shown a susceptibility to submissions in the past, as he succumbed to Shields, Ronaldo Souza, Jason Miller and Evan Tanner. Granted, all of those fights took place more than half a decade ago and at middleweight, but it is nonetheless a real path to victory for “The Chosen One.”

Oddsmakers have pegged Lawler as the favorite anywhere between -190 to -220, with Woodley in the underdog range of +160 and +175. This feels justified stylistically and statistically; both men have no glaring weaknesses and the ability to end the fight instantaneously, and both have been models of consistency. While this is not the most-desired matchup for Lawler, there is still much about which to get excited. For Woodley, this is his chance to secure his name in the history books as something more than just “a good fighter.” As for Lawler, this is another opportunity to secure his spot as the most exciting champion in the UFC -- possibly ever -- as well as take one step closer toward justifying his name alongside the great welterweight champions of old.

Data for the analysis was provided by FightMetric. Eric Stinton performed all analysis. Stinton and Sherdog.com assume no responsibility for bets placed on fights, financial or otherwise.
Related Articles
Latest News
ALLUFCBELLATORPFLONE