The Ultimate Fighting Championship heavyweight title has not been kind to the home team lately. Cain Velasquez lost his championship to Fabricio Werdum in front of a supportive Mexico City crowd; Werdum, in turn, lost it to Stipe Miocic in front of his Brazilian countrymen. Miocic will now try to buck the trend by defending his belt for the first time in his hometown of Cleveland, where he faces Alistair Overeem on Saturday in the UFC 203 (current odds) main event. Miocic has fought a combined 3:41 in his two fights this year. This will be his third fight of 2016 and the fifth straight bout in which he fights a former champion of some sort.

Standing opposite the defending champ will be Overeem, a longtime MMA veteran who has fought in virtually every major promotion during the course of his career. Overeem has undergone a recent career resurgence following a shaky start in the UFC. The former K-1, Dream and Strikeforce champion went 2-3 in his first five UFC fights, but he has since reeled off four straight wins, three of which came by knockout or technical knockout. This will be his second fight of 2016 and the fourth consecutive bout against a champion or former champion.


Advertisement
There are a lot of angles to this matchup, so let’s see what the Tale of the Tape tells us: 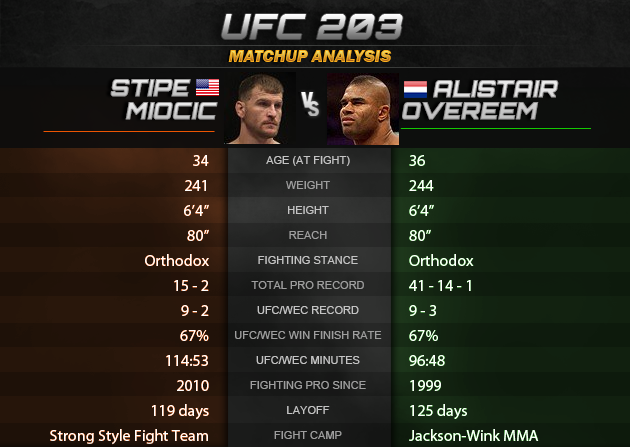 A bit of housekeeping up front: The numbers for Overeem are limited to his Strikeforce and UFC heavyweight fights. The purpose is to accurately depict the fighter he is now, so statistics from over 10 years ago and at different weight classes were not used.

Anthropometrically, they are nearly mirror images of each other. They are the same height and have the same reach, and they weigh in at negligible weight differences. To compound their physical similarities, they prefer the orthodox stance, are coming off similar layoffs and have identical finish rates in the UFC.

The real difference between them lies in their experience. Overeem has been fighting in the biggest promotions all over the world since Y2K was a thing -- 11 years before Miocic took his first professional fight. With two years and 39 fights on the Ohio native, there is little about Miocic that Overeem has not seen before. At the same time, this also translates into much more tread on the tires for the Dutchman; Overeem has been knocked out in all three of his UFC losses, whereas Miocic has only been finished once in that timeframe. This dynamic of striking ability versus ability to take a punch will be an essential component in the fight.

The final variable to take into account is their respective camps. One can never doubt the consummate preparedness of Greg Jackson-trained fighters. Much of Overeem’s recent success has been a result of sticking to a game plan with greater fidelity; not surprisingly, these pieces came together for Overeem when he started training with Jackson full-time in 2014. Strong Style Fight Team has been a perfect fit thus far for Miocic, but without many other successful, high-level fighters in its stable, it is hard to compare it to Jackson-Wink MMA. If Miocic can string together a solid championship run, starting against Overeem, it would do a lot to further legitimize the team.

Fights always start standing, and this one looks like most of it will take place on the feet, as well. Let’s see what the striking numbers have to say: 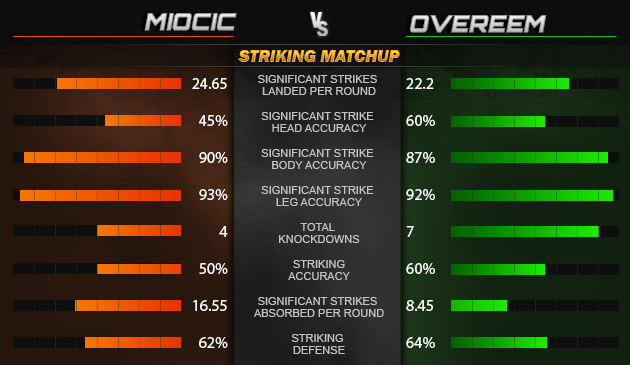 Miocic and Overeem are quality strikers, but they have very different styles. Overeem is a Dutch style kickboxer with a lethally balanced striking game. He lands four to five strikes every minute and does so accurately to varied targets without compromising his defense too much. Of his total output, 60 percent is aimed at his opponents’ head, 30 percent to the body and 10 percent to the legs. Not surprisingly, Overeem’s range varies, as well: 43 percent of his strikes come at distance, with 20 percent in the clinch and 37 percent to grounded opponents.

Miocic is more of a traditional boxer who has adapted to MMA. He has quick counters and smooth punching combinations. His preferred target is much more predictable than Overeem’s: 88 percent of his strikes are aimed upstairs, with five percent going to the body and seven percent to the legs. Likewise, he tends to strike from distance, which accounts for 78 percent of his output, whereas the clinch and ground strikes account for the remaining nine percent and 13 percent of his striking attempts.

Overeem is by far the more seasoned striker here. He has also added new wrinkles to his game at Jackson-Wink MMA, focusing less on constant pressure and forward movement and more on maintaining distance and picking his shots from the outside. The real question mark here is in the power department. In his UFC and Strikeforce tenure, Overeem has scored seven knockdowns and has been knocked down four times, whereas Miocic has four knockdowns and been knocked down once. This is heavyweight MMA, which means anyone is susceptible to eating a big shot and going down, but when it comes to durability, Miocic has the clear edge. Both men have power, but the defending UFC champion has a much better chin on him.

If the fight hits the mat for a reason other than a knockdown or knockout, here is how it will likely play out: 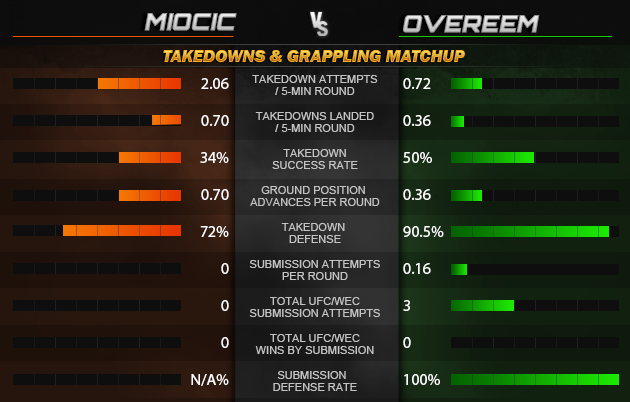 As it is in the striking department, both men are very capable on the ground but in very different ways.

Miocic comes from an NCAA Division I wrestling pedigree, and the numbers show it. He attempts a takedown every few minutes, and even though his completion rate is on the low side, the threat of his takedowns opens up more striking opportunities. Due to his solid footwork and boxing, only four opponents have attempted to take down Miocic, though three of them -- Junior dos Santos, Gabriel Gonzaga and Joey Beltran -- succeeded in completing one. Once on the ground, Miocic is more active in advancing position, where he opts to throw strikes from top position instead of looking for a submission.

Overeem, on the other hand, is mostly a defensive wrestler with legitimate jiu-jitsu chops. He can go entire rounds without attempting a takedown, and when he does attempt one, it is usually from the clinch. His takedown defense is stalwart, though. Only Frank Mir and Fabricio Werdum have taken him down in his recent run. It is worth noting that even though Mir and Werdum are among the most dangerous submission artists in heavyweight history, Overeem was more than able to hang with them for brief episodes on the ground, and he ended up winning both of those fights. Once on the ground, Overeem is a ferocious striker, even from inside the guard, and has a diverse array of submissions at his disposal.

While Overeem has yet to submit anyone in the UFC or Strikeforce -- all three of his attempts came against Paul Buentello in 2007 -- he has 17 submission wins in his career. Miocic has none. At the same time, Miocic has never had to fight off any submissions, mostly because his top game has been so smothering that no one has been able to attempt one. Should there be any prolonged grappling exchanges, it will be an interesting dynamic of position versus submission, likely favoring whoever is on top.


The betting lines are extremely close and for good reason. Though Miocic is a slight favorite anywhere from -120 to -150, Overeem is a legitimate threat as a +125 to +100 underdog. This is a fight that could go any number of ways, as both men are capable of finishing the fight from various positions. This truly is one of the best fights the heavyweight division has to offer. For Miocic, this is a chance to throw his name in the mix alongside the best UFC heavyweights ever, as one defense is halfway to the division’s record. He has this opportunity in front of his hometown, no less. For Overeem, this is his chance to finally bring home the big one. He has risen to the championship level of almost every organization in which he has fought, and this is by far the most important title to claim. A win in Cleveland will solidify his spot as one of the greatest ever. A lot is on the line for both Miocic and Overeem, who will remind the world that heavyweight MMA is a whole lot more than the meme of slow, out-of-breath clunkers lumbering around the Octagon.