The Big One has finally arrived. After years of red tape, the Ultimate Fighting Championship will make its long-anticipated debut at Madison Square Garden on Saturday, as UFC 205 “Alvarez vs. McGregor” (live odds) goes down in New York.

Accounting for one half of the headlining bout is Conor McGregor, the biggest star in the sport. After claiming the featherweight title in December, McGregor has stayed busy in other divisions in 2016, splitting a pair of fights at welterweight against Nate Diaz. He last stepped foot in the cage in August, when he rebounded from the first UFC loss of his career to take a five-round decision against Diaz in what is alleged to be the biggest event in the promotion’s history. This will be the second time preparing for a lightweight title fight, but it will be the first time he actually gets a shot to make history as the first fighter to simultaneously hold UFC titles in two weight classes. This is McGregor’s third fight of 2016.

Standing between McGregor and history is lightweight champion Eddie Alvarez. He is no stranger to the pressure of precedent, as he became the first fighter to win championships in both Bellator MMA and the UFC. Though he dropped his UFC debut against Donald Cerrone, Alvarez is currently riding a three-fight winning streak, with each victory coming against a former major organizational champion. He was last in action in July, when he punched the belt off of then-champ Rafael dos Anjos in the first round. This, his first title defense and third fight of the year, will no doubt be the biggest bout of his long, storied career.

There is a lot to dissect, so let us see what the Tale of the Tape has to say: 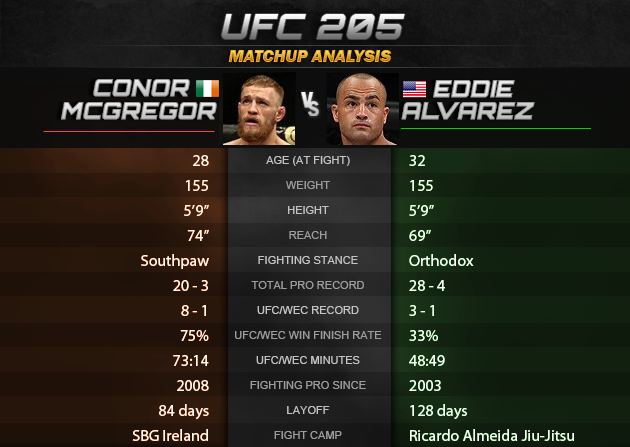 The Irishman carries the anthropometric edge into the fight. Though the two are the same height, McGregor has a five-inch reach advantage. While Alvarez may be more immediately familiar fighting at 155 pounds -- McGregor has spent the last nine fights of his career at either 145 or 170 pounds -- “Notorious” has fought at lightweight before, so that should not play much of a role in the fight.

When it comes to experience, Alvarez started fighting professionally five years before McGregor, has fought nine more times in his career and has been fighting at the highest levels for longer. With that being said, this is not McGregor’s first rodeo; despite his last four fights being among the biggest in UFC history, he has yet to show any signs that he was in over his head, psychologically or technically.

Some other factors to consider: McGregor’s last fight was more tolling and more recent than Alvarez’s. Then again, Alvarez has certainly accrued more mileage in his career than McGregor, having gone through several wars throughout his career. It is unlikely that either of them is slowing down at this point, but it is always worth pointing out.

Ultimately, the Tale of the Tape paints a picture of a mostly even matchup, meaning the fight will be won or lost in the stylistic details. Here are the numbers for the striking matchup: 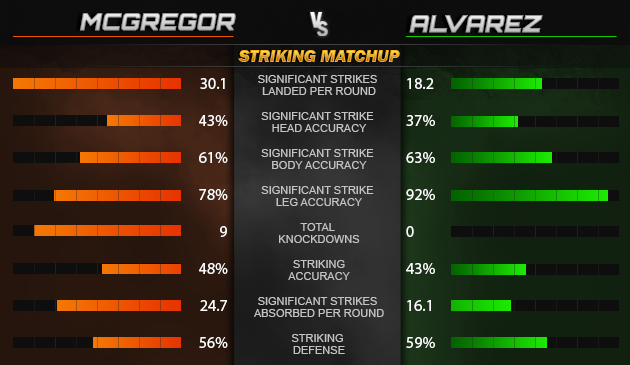 A note of housekeeping: Unfortunately, there are very limited statistics available for Alvarez, who fought most of his career in Bellator. Thus, we have an incomplete picture, most notably when it comes to knockdowns. Still, the four fights of statistics provide useful insights into his game.

Both Alvarez and McGregor are primarily standup fighters, though they have distinctly different games. Alvarez is mostly a puncher, with limited kicks in his arsenal. He targets his opponents’ heads in 77 percent of his strikes, aiming for the body 16 percent of the time and legs for the final seven percent. The majority of these strikes come at range, which accounts for 82 percent of his strikes. Clinch strikes amount to 16 percent of his total output, while ground strikes barely register at two percent. His low accuracy is counterintuitive given his relatively slow work rate, and while he has earned his reputation as a slick boxer with punishing power, Alvarez has always been hittable due to his willingness to bite down and mix it up in the pocket.

McGregor is among the most effective pressure fighters in the UFC, using his length and volume to push opponents backwards. He targets the head for 78 percent of his total strikes, while body and legs account for 13 percent and nine percent of the rest of his output. His preferred range is more lopsided, with 87 percent coming at range, six percent in the clinch and seven percent on the ground. He has accurate, diverse striking, utilizing sound boxing and an array of side and spinning kicks to keep opponents off-balance and in reverse, and his knockout power is indisputable. McGregor has similar defensive holes in his striking, namely how he is hittable when he steps in or out of combinations.

The standup battle will almost certainly dictate the outcome of the fight. McGregor will look to keep Alvarez at bay by controlling the distance through range and movement. Alvarez has had success against longer opponents by closing the distance to get a step inside the ends of their punches and by working dirty boxing in the clinch. The battle of range will be the central tension of the matchup, but the real X factor is power. Alvarez has only been knocked out once -- in a welterweight bout in 2007 -- but he has been dropped plenty of times in his career. The lightweight champion has knockout power of his own, though McGregor’s chin has looked solid so far; he has never been knocked out in his career, and he has yet to be knocked down in the UFC.

Though this will likely be a standup affair, wrestling plays a role in how the standup will unfold. Let us see how grappling could affect the fight: 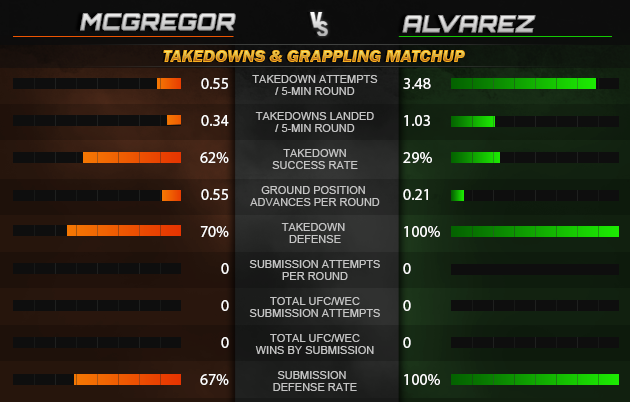 McGregor’s wrestling has primarily been used defensively in his UFC career. He has shown serviceable takedown technique when he has needed to, but he has only attempted more than one takedown in one fight. Moreover, McGregor only completed a takedown in two of the four fights in which he attempted them. He has never attempted a submission in the UFC, and he has escaped two of the three subs thrown at him, tapping to a Diaz choke after he had been dazed on the feet. Suffice to say, McGregor will probably not have to worry much about the submission threat of Alvarez.

Despite Alvarez’ strike-first style, his background is in wrestling, and he utilizes his grappling chops to stay upright and compliment his striking game. Although his completion rate is low, takedown attempts serve mostly as setups for body-head combinations or as a way to keep opponents on their toes. In less than half the amount of fights that McGregor has had in the UFC, Alvarez has attempted more than four times the amount of takedowns. He is also skilled at using his base to pin opponents against the fence, where he can grind away at their cardio while peppering them with short shots. This could significantly impact the fight, especially if it reaches the championship rounds. Alvarez likewise has never attempted a submission in the UFC, nor has he had to defend one.

Alvarez’s wrestling adds a meaningful wrinkle to his standup, and it should pay dividends in the fight. Whether or not he is able to implement pressure against the fence could very well be the difference between a decision going for him or against him. McGregor has shown solid anti-wrestling skills thus far in the UFC, but given Alvarez’s size and style, this may end up being the stiffest wrestling test yet for the Irishman.


It is a special treat when champions in two divisions square off. Though this is holding up two divisions’ worth of contenders, it is still an eminently exciting fight, especially in terms of the stylistic matchup. There are many factors at play, and as such, the odds are close. Depending where you look, McGregor is somewhere between a -147 and -160 favorite, while Alvarez is in the range of a +115 to +130 underdog. It is a fitting fight to christen MMA at Madison Square Garden. If McGregor wins, he pulls off what has so far been an impossible feat in the UFC by reigning over two divisions at the same time; how long that will be allowed remains to be seen. For Alvarez, who already has one of the best lightweight résumés in the history of the sport, this is a chance to set himself apart as one of the two or three greatest 155-pound fighters ever. Either way, greatness awaits the victor.