After a few weeks without any events, the Ultimate Fighting Championship returns with a stacked lineup for UFC 211 on Saturday at the American Airlines Center in Dallas. In the co-main event, the women’s strawweight championship is up for grabs, as defending champion Joanna Jedrzejczyk meets streaking contender Jessica Andrade.

The undefeated Jedrzejczyk has been in a class of her own ever since she knocked out inaugural strawweight champion Carla Esparza in 2015. Since then, she has reeled off four consecutive and dominant title defenses while seldom finding herself in any real danger. She was last active in November, when she took a lopsided unanimous decision against Karolina Kowalkiewicz at UFC 205. She is currently the second-most tenured UFC champion, trailing only Demetrious Johnson in the number of title defenses and the length of her reign.

On the other side of the cage, Andrade will look to snatch the crown and extend her winning streak to four fights at the same time. After starting off her UFC career 4-3 in the bantamweight division, she dropped to a more natural 115-pound weight class at UFC 199 in 2016. Since then, she has finished two of her three opponents and garnered “Performance of the Night” bonuses in her last two outings. Most recently, she defeated former Invicta Fighting Championships titleholder Angela Hill by unanimous decision in February, sweeping the judges’ scorecards en route to winning “Fight of the Night.”

This is a standout bout on a stacked card, and it has high potential to turn into a legitimate banger of a fight. Here is what the Tale of the Tape has to tell us: 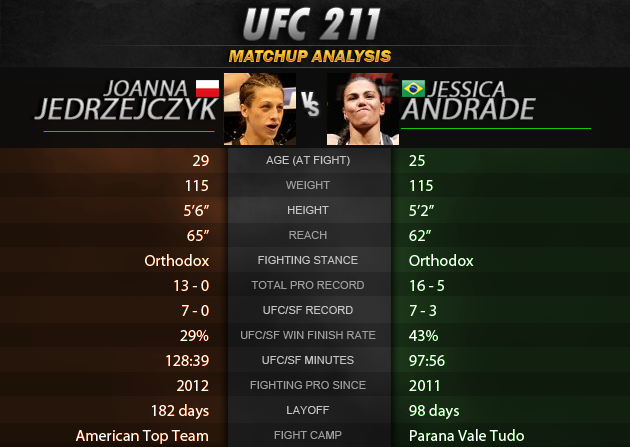 The defending champion has a clear anthropometric edge, especially as an elite striker. Four inches of height and three inches of reach are distinct advantages for Jedrzejczyk. Height and reach on their own are not automatically useful, but for the five-time muay Thai world champion, these are tools on which she knows how to capitalize. At the same time, Andrade has spent most of her career fighting women much larger than herself; she has been at a height and reach advantage for every one of her UFC fights thus far.

The Brazilian contender is younger but has more MMA experience under her belt. She started fighting professionally eight months before Jedrzejczyk and made her UFC debut a year before the champion did. Though Andrade has an additional three fights in the promotion, Jedrzejczyk has logged an additional 30 minutes in the Octagon. This is a result of a few things. First, Jedrzejczyk has had three full championship fights. Second, Andrade finishes her fights more often than Jedrzejczyk. Finally, Andrade has also been finished in each of her three losses in the UFC. All things considered, it is hard to say that either has an edge on the other in terms of fight experience.

The only other factor to make note of is their respective training camps. Jedrzejczyk recently moved to American Top Team, an elite stable. This is a positive sign for an undefeated champion, as it shows she is still chasing improvement even while at the top of her division. Andrade, on the other hand, trains at Parana Vale Tudo, which has few notable fighters on its roster. While there are plenty of examples of successful fighters from smaller gyms, champions more commonly come out of established camps with higher numbers of UFC-level talent.

As always, these numbers are only a glimpse of the actual fight. Most likely, this matchup will primarily be a standup affair. Let us see how the striking numbers break down: 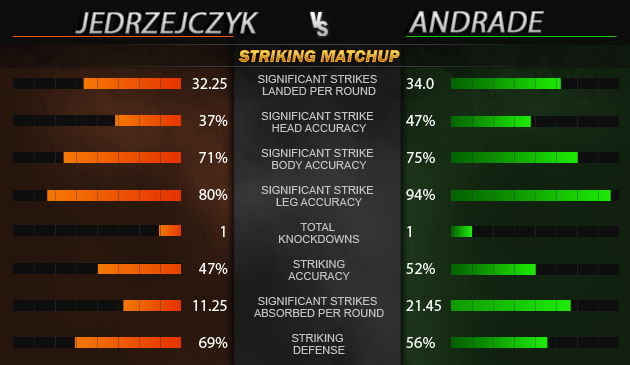 There are few fighters in any division, male or female, who can match Jedrzejczyk’s technical striking prowess. She is an aggressive and smooth kickboxer, equally comfortable initiating exchanges or countering. She uses pinpoint footwork and a piercing jab to control the range and unload multi-strike combinations on retreating opponents. She also works at a tremendous pace, throwing 13-14 significant strikes per minute and landing nearly half of them. Of all her attempted strikes, 70 percent of them are aimed at her opponent’s head, 16 percent go to the body and 14 percent are leg strikes. She overwhelmingly prefers to stay in the pocket or at distance, where 86 percent of her strikes originate, while 13 percent are in the clinch and a measly one percent is to grounded opponents.

Andrade may not be on the same technical level as Jedrzejczyk, but she is no less likely to oblige the champion on the feet. Andrade’s game is predicated on aggression and volume. She is an explosive puncher with more one-shot power than her single UFC knockdown suggests, and when she is able to push her opponent backwards -- preferably into the fence -- she attacks in vicious flurries. She is one of five fighters on the entire UFC roster who lands more strikes per minute than Jedrzejczyk, ranking third overall in the category. Of those strikes, 82 percent are head shots, while 15 percent are aimed at the body and three percent are leg strikes. Her preferred range is a bit more balanced, with 71 percent coming from distance, 22 percent in the clinch, and seven percent to opponents on the ground.

As always, the striking matchup favors Jedrzejczyk, but Andrade is still dangerous -- so long as she is moving forward. The problem for “Bate Estaca” is that Jedrzejczyk is also an effective counterpuncher who can inflict significant damage moving backwards. It will be telling to see if Andrade’s aggression and explosiveness can mitigate Jedrzejczyk’s technical advantages.

There is another phase of the fight, however. Let us see how the grappling numbers stack up: 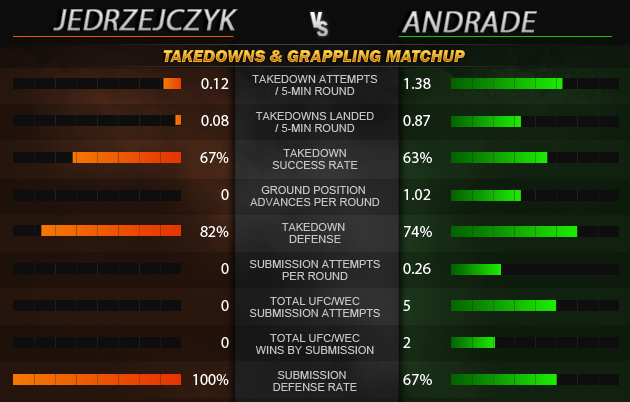 The grappling matchup is an interesting clash of styles.

Andrade is by far the more capable wrestler of the two. Her low center of gravity gives her stout takedown defense and also allows her to get in on opponents’ hips quickly. She has an arsenal of takedowns and trips at her disposal, not to mention powerful slams that justify her “Pile Driver” nickname. She has completed at least one takedown against everyone she attempted to take down, and once she is on top, she has a solid positional game that helps her to land big shots and go for submissions. The jiu-jitsu purple belt has a number of submissions in her toolbox, but she has also been submitted in two of her three UFC losses.

Then again, Andrade has little to fear from Jedrzejczyk in the submission department. Jedrzejczyk has never attempted a submission in the UFC and has only attempted a total of three takedowns. Her takedown defense is stellar, however. Only Claudia Gadelha has had any kind of success taking her down, and even then, Jedrzejczyk was able to avoid potential fight-ending situations. Jedrzejczyk is also ferocious in the clinch, which happens to be a spot of vulnerability for Andrade. If Andrade gets careless closing the distance and is unable to get Jedrzejczyk down, the muay Thai ace will make her pay for it.

Ultimately, Andrade is the better overall grappler, but it is unlikely that she will be able to win the fight purely off of her takedowns and submissions. Instead, she would be better off blending her takedowns into her standup strategy to compliment her striking. If she can make Jedrzejczyk hesitate on the feet for fear of getting taken down, it will drastically improve her chances at dethroning the champ.


This is an exciting matchup in the best women’s division in the sport. Though Jedrzejczyk has not given anyone reason to bet against her, the odds are surprisingly close. Depending on where you look, Jedrzejczyk is the favorite anywhere between -162 to -195, while Andrade is in the +130 to +150 underdog range. Andrade’s superior power and explosiveness make for an intriguing contrast to Jedrzejczyk’s superior technical application. They both have ways to win, and no matter what happens, this fight promises to bring fireworks.