The words -- though he may have suspected the news they brought -- cut Keith Jardine to the bone.

In wake of his hard-fought unanimous decision defeat to former light heavyweight champion Quinton “Rampage” Jackson in the UFC 96 main event on Saturday at the Nationwide Arena in Columbus, Ohio, Jardine was stung by a revelation from one of the cage-side judges. The knockdown he suffered in the closing seconds of the fight may have cost him a victory.

“I’m pretty pissed off right now,” Jardine said. “One of the judges told me I lost the fight in the last 10 seconds, and that’s pretty hard to take.”

Jackson won by scores of 29-28, 29-28 and 30-27. The 30-year-old Memphis, Tenn., native had a difficult time adjusting to Jardine’s unorthodox style but still knocked him down twice en route to the 30th win of his career. Jackson admitted that Jardine surprised him with his fortitude and his ability to absorb punishment.

“I hit Jardine with everything but the kitchen sink,” he said. “He wouldn’t let up. He went down [in the second round], and I tried to pounce on him, but he recovered and got up. He was pissing me off. I was, like, ‘Man, why don’t you just stay your ugly ass down. Let me knock you out.’ He wouldn’t go.”

Jardine has alternated between wins and losses in his past six bouts. Even in defeat, he reaffirmed his place as one of the sport’s top 205-pound competitors.

“It was a tough fight,” he said. “I thought I did everything right training for this fight. I thought I was on. I came into this fight in the best shape of my life.” 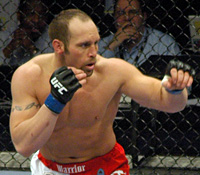 Photo by Sherdog.com
Shane Carwin is now in
title contention.
Ten months and three fights ago, he was a largely unknown commodity, a freakishly strong hulking heavyweight with a resume full of first-round finishes against lower-tier competition. Shane Carwin left the scene of his latest conquest as a legitimate contender for the UFC heavyweight crown.

The unbeaten Carwin (11-0) stopped former title challenger Gabriel Gonzaga in the co-main event at UFC 96 and needed barely more than a minute to turn the trick. Affiliated with the same Greg Jackson camp as UFC welterweight champion Georges St. Pierre and UFC light heavyweight titleholder Rashad Evans, the 34-year-old dropped Gonzaga with a short straight right hand during a first-round exchange and then finished the Brazilian with heavy punches on the ground.

“I work with one of the best teams in the world,” Carwin said. “We’re all like brothers there. We train like that every day. I’m just going to keep on continually improving.”

In Carwin’s 11 career victories, he has finished his foe inside the first minute five times -- including 22-, 29- and 31-second stoppages. In fact, the 6-foot-3, 260-pound Colorado native has not been pushed beyond two minutes since he made his professional debut in a World Extreme Cagefighting event back in 2005; that bout lasted 2:11. Because he finishes so quickly, questions about conditioning continue to dog Carwin.

“That question gets raised all the time,” he said. “I train at 6,000 feet. We go five fives all the time. My conditioning, I think, is one of my assets, so, no, I’m not concerned. Actually, I think I get better as the rounds go on.”

Since he entered the UFC in May, Carwin has dispatched Gonzaga, Neil Wain and Christian Wellisch in a combined 3:24. His conquest of Gonzaga -- a decorated grappler in his prime who knocked out Mirko “Cro Cop” Filipovic and once challenged Randy Couture for the UFC heavyweight belt -- put him on the map in the minds of many.

“There’s always doubters, but Gabe was a top 10 fighter in the world,” Carwin said. “Keep putting them in front of me, and I’ll keep fighting because it’s what I love to do.” 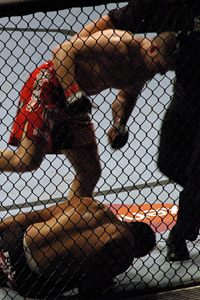 Matt Hamill had little time to savor his $60,000 “Knockout of the Night” bonus after he blasted Mark Munoz with a brutal head kick in one of the featured bouts at UFC 96. The Ohioan felt some backlash over his post-fight celebration, which was conducted as Munoz lay motionless against the cage.

“I just got a little excited, emotional,” Hamill said. “You have to understand. It’s like when you go under the water. You feel like a bubble. Can you imagine over 10,000 people that are making all of the bubbles? That just got into my body. It just got me really electrified, really excited.”

The 32-year-old Hamill -- who has won back-to-back fights since his technical knockout loss to former middleweight champion Rich Franklin at UFC 88 -- wished Munoz well once he harnessed his emotions. The previously unbeaten Californian and WEC veteran was down for several minutes after being struck but left the cage under his own power, albeit in a neck brace.

Meanwhile, Jackson and Jardine pocketed matching $60,000 “Fight of the Night” bonuses after they engaged in a three-round battle in the main event. Judges sided unanimously with Jackson, who has posted eight wins in nine fights. Since the event ended without a submission, no “Submission of the Night” bonus was awarded.

Gray Maynard, quietly rising up the lightweight ranks, has won four straight fights by decision. The 29-year-old Xtreme Couture product defeated Jim Miller in his latest route-going effort … According to UFC President Dana White, UFC 96 drew 17,033 fans for a $1.8 million gate … “The Ultimate Fighter 3” middleweight winner Kendall Grove delivered his first finish in nearly two years when he stopped Canadian Jason Day on strikes 92 seconds into their bout. The Hawaiian had not finished an opponent since he choked Alan Belcher unconscious at UFC 69 in April 2007 … Jason Brilz, a unanimous decision winner against Tim Boetsch, has not lost a match since Sept. 9, 2001, two days before the terrorist attacks in New York City and Washington, D.C. The former Victory Fighting Championship titleholder owns a 12-0-1 mark in his past 13 appearances … Products of “The Ultimate Fighter” reality series went 5-2 at UFC 96. Aside from Jardine, only Pete Sell, a Brazilian jiu-jitsu black belt who appeared on season four, tasted defeat.