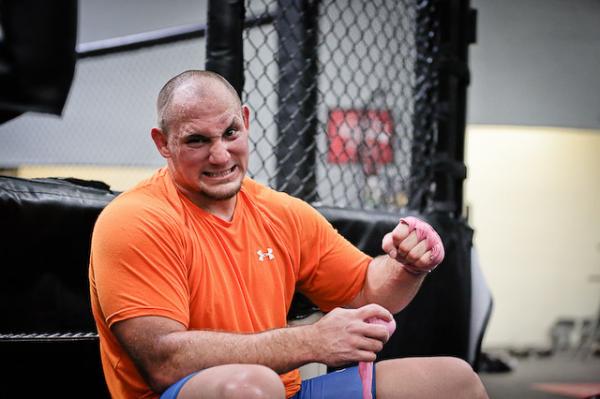 
Shawn Jordan believes he has only scratched the surface in mixed martial arts.

The former Louisiana State University fullback will meet “The Ultimate Fighter” Season 10 graduate Matt Mitrione in a featured heavyweight clash at UFC Fight Night 37 on Saturday at the Cotai Arena in Macau, China. Jordan has compiled a 3-2 record since arriving in the Ultimate Fighting Championship in March 2012, posting victories over Oli Thompson, Mike Russow and Pat Barry.

“I think I’m really just beginning to understand how to learn [and] how to adapt and figure out fighting,” he told Sherdog.com. “I’ve played other sports. I’m a pretty good athlete. I’m learning how to use that in this sport. I think that’s big, especially right now in my career. I think I’ve been really training for probably about three years. I’m kind of getting the hang of it now.”

Jordan last fought at UFC 166 in October, when he succumbed to first-round punches from Gabriel Gonzaga at the Toyota Center in Houston. The 93-second defeat halted a modest two-fight winning streak 29-year-old El Paso, Texas, native.

“He and I were still kind of moving and trying to feel each other out and gauge the range we had,” Jordan said. “He just threw a counter hook. I got caught. It happens. You can throw that same punch 100 times and never land, but that night it landed.

“When you train for fights, you just have to get better with each one,” he added. “Especially for heavyweights, [you have to work on] defense and covering up and movement and not standing in front of each other. Just throwing punches and standing there, that’s dangerous for everybody.”

Mitrione will hold a three-inch height and better than six-inch reach advantage over “The Savage.” The Blackzilians representative last appeared at UFC 165 in September, when a Brendan Schaub brabo choke rendered him unconscious 4:06 into the first round at the Air Canada Centre in Toronto. Mitrione has spent his entire nine-fight career in the UFC. Jordan’s motives are simple.

“I like to go in there and bang it out,” Jordan said. “I love doing that and I’ve done it plenty of times, but I just want to win. It doesn’t really matter how. I don’t care if it’s a three-round war, submission, knockout, whatever, however. I just want to win.”

Jordan, who has trained previously with Jackson’s Mixed Martial Arts, has thrown out his anchor at American Top Team in Coconut Creek, Fla.

“Camp’s been great, training every day with some of the best grapplers and strikers in the world,” he said. “I’m ready. I’m excited about this. I’m excited to get back in the cage and kind of get back on a winning streak.”

Photo: Dave Mandel/Sherdog.com
Can Hioki rebound?
Once viewed as the No. 2 fighter in the world at 145 pounds, Hatsu Hioki has not registered a victory in more than two years.

The former Shooto and Sengoku champion will lock horns with Ivan Menjivar in a featherweight showcase at UFC Fight Night 37, as he looks to put an end to a three-fight losing streak and perhaps avoid the Zuffa chopping block. Since besting George Roop and Bart Palaszewski in his first two appearances inside the Octagon, Hioki has fallen short in decisions against Ricardo Lamas, Clay Guida and Darren Elkins.

Menjivar, meanwhile, has questions of his own to answer. The 31-year-old Tristar Gym representative has won just once in his past four outings, with losses to Mike Easton, Urijah Faber and Wilson Reis. Menjivar has not competed as a featherweight since 2010.

“Ivan has a lot of experience and ways to finish fights, so I’m looking forward to the match,” Hioki said in a pre-fight interview with UFC.com. “I am honored to share the Octagon with a pioneer like him.”


UFC Fight Night 37 “Kim vs. Hathaway” will be the 264th event staged in Ultimate Fighting Championship history ... John Hathaway’s last seven fights have gone the distance ... “The Ultimate Fighter: China” welterweight finalist Lipeng Zhang lists former UFC champion Georges St. Pierre as his hero ... South Korean lightweight Yui Chul Nam has already held titles inside the Road Fighting Championship and Spirit Martial Challenge promotions ... “The Ultimate Fighter” Season 12 semifinalist Nam Phan has endured four different two fight-losing streaks as a professional, but the 30-year-old Orange County, Calif., native has never dropped three in a row ... Undefeated Brazilian Alberto Mina, 31, has finished all 10 of his foes, eight of them inside one round ... At 22, Anying Wang will be the youngest fighter on the UFC Fight Night 37 roster ... Jumabieke Tuerxun will enter his Octagon debut with a perfect 14-0 mark, but only three of his 12 career opponents -- Longyun Jiang, Irshaad Sayed and Honggang Yao -- have winning records. He has beaten Sayed and Yao twice each.