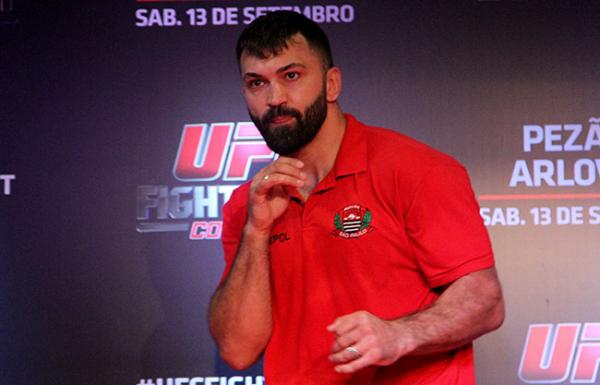 Andrei Arlovski has won five of his past six bouts. | Photo: Gleidson Venga/Sherdog.com


Andrei Arlovski understands what it takes to reach the mountaintop in the Ultimate Fighting Championship heavyweight division.

“If you want to be the best, you have to fight with the best fighters,” he told Sherdog.com. “Obviously, the UFC has the best heavyweight division right now. There’s great fighters -- tough fighters. Right now, I’m focused on my fight with ‘Bigfoot,’ the rematch with ‘Bigfoot.’ We’ll see what’s going to happen after.”

Arlovski and Silva are no strangers to one another’s strengths and weaknesses. They first met under the Strikeforce banner in May 2010, when the monstrous Brazilian walked away from the Scottrade Center in St. Louis with a unanimous decision. Now, some four years later, Arlovski seeks redemption.

“Everybody who beat me is on my list,” he said. “If I have an opportunity to fight them, it will be perfect. I watched that fight a couple of times with my coaches, with Greg Jackson. It was a horrible fight, to be honest with you. In this camp for my coming up match, I did a lot of homework. Hopefully, it’s going to be a different fight.”

Silva has not competed since his unforgettable battle with 2001 K-1 World Grand Prix winner Mark Hunt in December. The five-round slugfest ended in a majority draw, but “Bigfoot” was subsequently suspended for nine months after testing positive for elevated testosterone. Still, the 34-year-old remains one of the division’s heaviest hitters, and he has exhibited steady improvement throughout his career. Wins over Fedor Emelianenko, Alistair Overeem and Travis Browne anchor Silva’s resume.

“He’s a heavyweight,” Arlovski said. “Obviously, he has heavy hands, and he has a heavy low kick. I was surprised I saw him throw a lot of front kicks [in recent fights]. I just need to be alert all the time.”

Arlovski returned to the Octagon for the first time in nearly six years at UFC 174 in June, when he escaped with a split verdict over “The Ultimate Fighter” Season 10 finalist Brendan Schaub. He admits his performance, which was widely panned, left a lot to be desired.

“I was nervous -- a lot,” Arlovski said. “I saw the fight ... after [the fight], I saw the replay, and you can tell in my eyes it was like I didn’t understand where I am. When Greg Jackson gave me instructions between rounds, I was lost. I was definitely nervous a lot for my second debut in the UFC. Like I said, hopefully it’s going to be a different story against [Silva].” 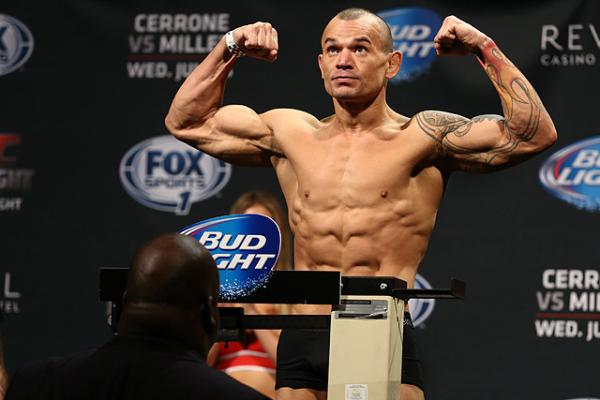 Photo: D. Mandel/Sherdog.com
Tibau is 14-8 in the UFC.
Gleison Tibau is closing in on some select company, as he approaches his co-headlining confrontation with Polish grappler Piotr Hallmann.

The Brazilian lightweight’s 22 career appearances inside the Octagon tie him for eighth on the UFC’s all-time list, behind only Tito Ortiz (27), Matt Hughes (25), Randy Couture (24), Chuck Liddell (23), Josh Koscheck (23), Frank Mir (23) and B.J. Penn (23). Barring injury or an unforeseen decline, Tibau could someday become the most prolific fighter in UFC history.

The American Top Team representative’s latest challenge comes against Hallmann, a 27-year-old Pole who has won 11 of his last 12 fights.

“I saw some video [on him],” Tibau said in his pre-fight interview with UFC.com, “and he looked like a good grappler and a tough guy.”


A seven-time Brazilian jiu-jitsu world champion, Leonardo Santos has secured eight of his 12 career victories by submission, five of them via arm-triangle choke ... Wendell de Oliveira Marques is a perfect 10-0 in fights that reach the judges ... Hawaiian bantamweight Russell Doane has held titles inside the X-1 World Events, 808 Battleground, Destiny MMA, King of the Cage and Tachi Palace Fights promotions ... Brazilian prospect Larissa Moreira Pacheco, 20, has finished all 10 of her opponents, five of them inside two minutes ... In his last six defeats, Paulo Thiago has been outstruck by a staggering 258 to 124 count in terms of total strikes, according to FightMetric data ... The four fighters to whom Francisco Trinaldo has lost -- Tibau, Hallmann, Michael Chiesa and Iuri Alcantara -- own a cumulative record of 85-19 ... Team Xplode MMA representative Dashon Johnson sports 21-, 34-, 62-, 73- and 81-second stoppages on his nine-fight resume ... A onetime Cage Fury Fighting Championships titleholder, welterweight George Sullivan was born in Red Bank, N.J. -- a small, 2.2-square-mile borough in Monmouth County that is home to a little more than 12,000 people ... Johnny Bedford wrestled collegiately at Cleveland State University ... UFC Fight Night “Bigfoot vs. Silva 2” will be the 290th event staged in Ultimate Fighting Championship history.