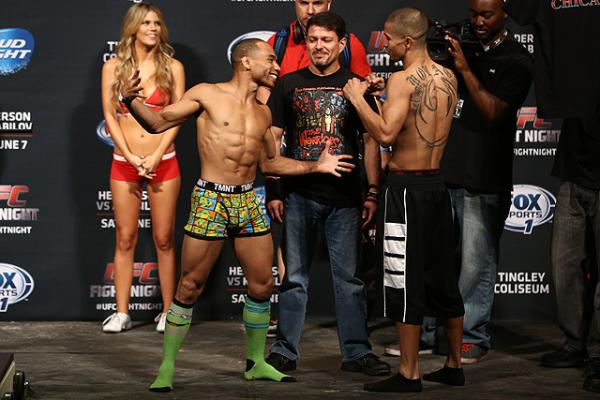 
A knee injury suffered while training has kept “The Ultimate Fighter” Season 14 winner John Dodson on the sidelines since he knocked out Darrell Montague at UFC 166 in October. Some eight months later, the world-ranked flyweight has resumed his pursuits in the Ultimate Fighting Championship’s 125-pound division.

Dodson will return to a featured matchup with John Moraga at UFC Fight Night “Henderson vs. Khabilov” on Saturday at Tingley Coliseum in Albuquerque, N.M. The 29-year-old “Magician” sounds like a man confident in the belief that his body has healed properly.

“The recovery was a long process, making sure I could get my knee healthy, trying to work on flexibility and just making sure I can be at 100 percent for this fight,” Dodson told Sherdog.com.

Moraga enters as the underdog, despite having rattled off eight wins in his past nine appearances. Splitting time between Arizona Combat Sports and the MMA Lab, the 30-year-old last competed at UFC Fight Night “Rockhold vs. Philippou” in January, when he walked away with a split decision over Dustin Ortiz at Gwinnett Arena in Duluth, Ga. He has a history with Dodson, who defeated him by unanimous decision at Nemesis Fighting event in 2010.

Dodson, an Albuquerque native, welcomes the chance to fight at home. He has not fought in New Mexico in nearly five years.

“It’s actually great, the fact that I can go ahead and just chill and relax in my own bed and have a good time,” Dodson said. “I don’t even have to worry about doing anything -- just chilling, really. I just want to make sure I can focus on this fight and do everything I want.”

A decision loss to reigning flyweight champion and pound-for-pound mainstay Demetrious Johnson in January 2013 remains the only blemish on Dodson’s UFC resume, and he admits he wants another crack at “Mighty Mouse.” First, he must handle his rematch with Moraga.

“If I can finish John Moraga, that should put me in title contention, but if we go to a decision and I look like I have a sloppy performance, I don’t think that’s going to [sit] well [with me],” Dodson said. “They should give it to somebody else [if that happens]; so I’ve got to make sure I bring my A game if I want to fight for that title.” 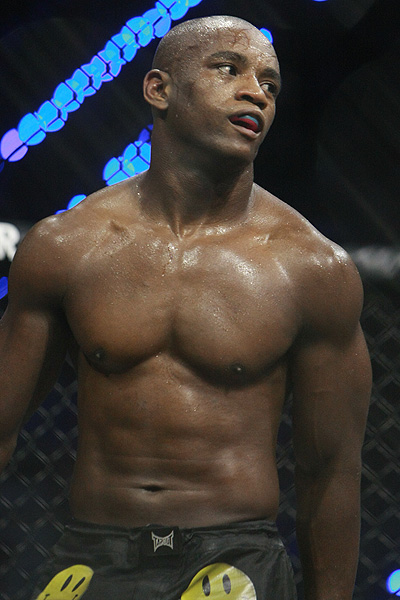 Photo: D. Mandel/Sherdog.com
Edwards has finished 33 fights.
Yves Edwards buys into the idea that speed kills, especially in the cage.

The “Thugjitsu Master” will look to end a three-fight winless drought when he meets twice-beaten Polish export Piotr Hallmann in a preliminary lightweight affair at UFC Fight Night “Henderson vs. Khabilov.” Edwards, 37, respects what his younger and far-less-experienced counterpart brings to the table.

“The guy looks tough, looks really determined as far as when he’s in there and he’s fighting,” said Edwards, who has not tasted victory since he knocked out Jeremy Stephens at UFC on Fox 5 more than a year ago.

Hallmann last fought at UFC Fight Night “Machida vs. Munoz” in October, when he wound up on the wrong side of a unanimous decision against Serra-Longo Fight Team’s Al Iaquinta at the Phones 4U Arena in Manchester, England. The defeat snapped a string of 10 straight wins for the promising 26-year-old. Edwards thinks he holds the advantage in at least one area.


UFC Fight Night “Henderson vs. Khabilov” will be the 276th event staged in Ultimate Fighting Championship history ... Benson Henderson is one of six men to have held the UFC lightweight championship, along with Jens Pulver, Sean Sherk, B.J. Penn, Frankie Edgar and Anthony Pettis ... “The Ultimate Fighter” Season 1 winner Diego Sanchez has spent four hours, 22 minutes and 57 seconds competing inside the Octagon, according to FightMetric.com. That figure ranks sixth on the UFC’s all-time list, trailing only Georges St. Pierre, B.J. Penn, Tito Ortiz, Randy Couture and Edgar ... Four of Jackson-Wink MMA export Erik Perez’s five career defeats have come by split decision ... Roufusport’s Sergio Pettis, 20, has already held titles in the North American Fighting Championship and Resurrection Fighting Alliance promotions ... When Strikeforce veteran Bobby Voelker climbs into the cage to confront Lance Benoist, a total of 1,051 days will have passed since his most recent victory: a second-round technical knockout against Roger Bowling in July 2011 ... A finalist in the 2009 Dream welterweight grand prix, Jason High has submitted five different opponents with guillotine chokes ... Scott Jorgensen was a three-time Pac-10 conference wrestling champion at Boise State University ... Guamanian lightweight Jon Tuck sports five first-round finishes on his resume, including an eight-second knockout against onetime Universal Reality Combat Championship titleholder Eduard Folayang ... A Brazilian jiu-jitsu and tae kwon do black belt, Roger Narvaez will enter his Octagon debut at a perfect 6-0, but the six men he has beaten own a cumulative record of 24-33.