Wearing a face that resembled a mask of horrors, Diego Sanchez rebounded from a tough opening round to take a hard-earned unanimous decision over Martin Kampmann at UFC Live 3.

Thursday night’s welterweight main event tilted Sanchez’s way down the stretch, as “The Nightmare” (or “The Dream,” as Sanchez now prefers to be known) forced exchanges and pushed the pace in an extremely close fight.

On the undercard, fans at the KFC Yum! Center in Louisville, Ky., saw the return of ex-WEC bantamweight champ Brian Bowles, a middleweight collision between C.B. Dollaway and Mark Munoz, and a good dose of action across the board.

Below, a closer look at who’s up and who’s down in our UFC Live 3 Stock Report.

Mark Munoz: Munoz needed a big win tonight and got it, scoring a first-round stoppage of “The Ultimate Fighter” Season 7 runner-up Dollaway. After being decked with a blinding right hand in an early exchange, Dollaway staggered and Munoz pounced. While the ensuing stoppage may have appeared quick to some, replays showed that it was perfectly timed by referee Mario Yamasaki, as Dollaway lost consciousness on the canvas.

Munoz’s striking will decide how far he goes, because his wrestling, ground-and-pound, and natural aggressiveness are top-notch. Michael Bisping may be the next logical opponent for Munoz -- an interesting matchup, though Chael Sonnen is a bigger name at this point for the Englishman.

Chris Weidman: Fighting on two weeks’ notice, Octagon newcomer Weidman faced a tough assignment in UFC mainstay Alessio Sakara. The first round looked rough for the New Yorker, as Weidman covered up smartly while blocking strikes and absorbing the low kicks Sakara unloaded. Banking on his wrestling base, Weidman took the fight to the mat in the second and third, using top control and choosing his strikes wisely while draining Sakara’s gas tank.

This was an outstanding UFC debut, especially taking into account the short notice and the fact that this was only Weidman’s fifth MMA outing. With his NCAA Div. I wrestling background and natural athleticism, Weidman is definitely a middleweight to watch.

Brian Bowles: When a fighter has been on the shelf for a year, rust and timing are always major question marks. In a rematch with the always-game Damacio Page, Bowles showed no ill effects of his 362-day layoff, keeping calm as Page came out fast with big strikes.

After flooring Page with a nice right uppercut, Bowles quickly passed to side control, uncorked his excellent guillotine choke and put Page to sleep. In doing so, the ex-champ put his name back in the conversation of a talented UFC bantamweight division that includes champ Dominick Cruz, Urijah Faber, Joseph Benavidez and Miguel Torres.

Cyrille Diabate file photo
Diabate picked Cantwell apart.
Cyrille Diabate: The “Snake” proved worthy of his nickname on Thursday, as Diabate slithered in and out on Steve Cantwell, picking apart the former WEC 205-pound champ with diverse standup and solid counter-wrestling. A fighter has to be confident to lead with uppercuts, and midway through the 15-minute striking clinic, Diabate was doing just that. At 6-foot-6, the Frenchman is a handful standing for most light heavyweights; chances are that his next opponent will learn from Cantwell’s mistake of allowing Diabate to display his muay Thai mojo.

Danny Castillo: The WEC import from Team Alpha Male got a big win in his UFC debut, earning a unanimous decision over the vastly more experienced Joe Stevenson. Castillo showed the full capacity of his game, complementing his stiff jab and tight standup with excellent scrambles and positional awareness.

Igor Pokrajac: With just 1-3 UFC record entering the bout, Pokrajac earned a much-needed win with his stoppage of Todd Brown. Mirko "Cro Cop" Filipovic’s training partner feasted on the overmatched Brown, showing decent enough hands and kicks to ensure that
Brown could not continue after the first stanza.

Diego Sanchez: It was a definitive, gutsy showing from Sanchez, who looked to be in for a bad beating after the first round. But he pushed ahead, forcing confrontations and, after endless stuffed takedown attempts, finally dragging Kampmann to the ground in the third to swing the decision his way.

Oddly, Sanchez looked softer at 171 pounds than he did at 185 during the first season of “TUF.” Slightly undersized for the welterweight division, the deficit was obvious against Kampmann. Sanchez has heart, conditioning and grit, but he lacks the wrestling horsepower to overwhelm opponents, an essential component to his style.

Martin Kampmann: On Thursday night, Kampmann was Kampmann: a precise striker with good takedown defense. However, the Dane allowed himself to get sucked into a brawl with Sanchez, and that proved his undoing. Whether or not the decision was correct, the rollicking slugfest that the last half of the fight degenerated into was exactly what Sanchez needed and Kampmann did not.

Shane Roller: The former WEC lightweight had a roller-coaster UFC debut, getting smacked around by Thiago Tavares in the opening round, only to rally in the second with a big right hand. Roller sealed the Brazilian’s fate with follow-up punches, snatching victory from what looked to be a one-sided thumping.

Roller has great core ability in his collegiate-level wrestling and has proven to be a gritty, durable fighter. However, the former Oklahoma State Cowboy will need to evolve his standup game and work on his striking defense. Pushing forward and heaving punches worked on this occasion, but it likely will not against top-tier l55-pounders.

Thiago Tavares: How quickly fates can change. Tavares’ standup and overall game looked fantastic in the first six minutes of his fight with Roller, as he delivered technical and powerful offense. Suddenly, Roller struck, landing a pinpoint right hand and following up with ground-and-pound to secure the knockout. Despite the loss, Tavares’ solid early work earns him a “hold.”

Alessio Sakara: The Italian veteran showed his trademark solid hands in the opening round against Weidman, but eventually succumbed to the relentless newcomer’s pressure and takedowns. Time will likely show that Weidman is an exceptionally talented fighter, one who will only improve with leaps and bounds in the future.

Sakara remains a marketable middleweight with considerable toughness. He fought through a lot of blood and adversity as the bout slipped away from him, but “Legionarius” kept battling. 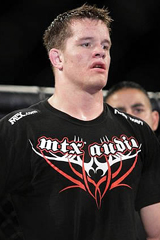 C.B.Dollaway file photo
Dollaway's stock slid.
C.B. Dollaway: Dollaway caught a tough loss, starting fast only to fall prey to Munoz’ heavy hands. The barrage of punches that Dollaway ate on the ground prompted a well-timed stoppage from Mario Yamasaki, who correctly deduced Dollaway’s loss of awareness. His winning streak snapped at three, it’s back to the drawing board for this talented middleweight.

Damacio Page: Coming out aggressive and active against Bowles, Page let it all hang out, unleashing big swings and kicks. Content to play the percentages, Bowles asserted himself once Page calmed down, landing a nice uppercut to stagger the Greg Jackson fighter, then passing guard for the fight-ending guillotine -- the same hold Bowles finished their first fight with.

This was not necessarily a disastrous loss, as Bowles is a top-five bantamweight when he’s at his best, but it is a definite setback. However, Page’s fan-friendly style should keep him on the roster, especially on the heels of such an
aggressive performance.

Steve Cantwell: The “Robot” never got on track against standup specialist Diabate. Cantwell never seemed to fully recover after eating some hard strikes in the opening minutes of the bout. The American did manage to get the “Snake” down eventually, but was unable to press his advantage. Such a one-sided loss comes as a definite setback for Cantwell, who returned from a 17-month hiatus.

Joe Stevenson: After 44 fights and nearly 12 years in MMA, the mileage may finally be adding up for Stevenson. “Joe Daddy” opened strong against Castillo, but was outwrestled and outstruck in key portions of a closely contested match. The packed UFC lightweight division has very little room for losing streaks, and this makes three straight losses for Stevenson, a onetime title challenger and winner of “TUF 2.”

Todd Brown: The stoppage loss to Pokrajac did not come for lack of effort by Brown, who continued trying even as the Croatian hammered him like a nail. This makes two losses in as many UFC appearances for the “Bulldog,” who seemed slightly soft around the middle, a la Patrick Cote at 205 pounds. If Brown returns, he would be best served to do so at middleweight.