Junie Allen Browning thinks his head may be next to roll.

The controversial lightweight, who thrust himself into the spotlight with his antics on season eight of “The Ultimate Fighter,” believes his submission loss to American Top Team’s Cole Miller at UFC Fight Night 18 on Wednesday at the Sommet Center in Nashville, Tenn., could cost him his job.

“With as many lightweights as there are in the UFC, that was probably my last fight, so I don’t think I have to worry about that anymore,” Browning told UFC.com. “I would like to keep fighting, but it’s pretty hard to stay in the UFC, especially in the lightweight division. One loss puts you on the verge of being cut.”

Considering his place as one of the UFC’s most polarizing figures, his being cut seems unlikely even though he was blitzed by Miller. After being stung with a right hand, Browning dove in carelessly for a takedown and left his neck exposed. Miller snatched a guillotine choke in the transition, tightened his grip and coaxed the tapout 1:58 into the match.

“I didn’t think I would get caught on the transition to the ground,” Browning said. “Even when he put [the choke] in, I didn’t think he was going to have it, and then he threw the leg up over the arm; it was in pretty tight then.”

The volatile 23-year-old Kentucky native, who now trains out of Xtreme Couture, reached the semi-finals in “The Ultimate Fighter 8” lightweight tournament before submitting to eventual winner Efrain Escudero. His loss to Miller was his first official defeat under the UFC banner.

Ricardo Almeida may have fought his last fight as a middleweight. 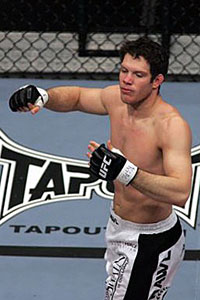 File Photo
Ricardo Almeida plans
a move to welterweight.
“My plans are to drop to 170 pounds,” Almeida told UFC.com. “My team has been saying that I’m too small to fight these big guys at 185. I’m really considering [the move]. I just have to talk of course with Joe [Silva] and [UFC President] Dana [White] and the UFC to see if I have their blessing.”

Almeida had no trouble getting past Horwich, an eccentric Team Quest veteran with a wealth of experience. A winner in eight of his past nine fights -- the lone defeat was a split decision loss to Patrick Cote -- Almeida put Horwich on his back in every round, threatened him with submissions and rarely allowed him room to operate. He knows sacrifices lay ahead.

“I have a choice between being one of the smallest middleweights or among the biggest welterweights,” Almeida said. “It’s definitely going to be a big sacrifice, but this is the UFC. You don’t have better fighters than here, and to win is very tough.”

Still only 33, Almeida holds victories against some of the world’s top middleweights, including Nate Marquardt, Kazuo Misaki and Ryo Chonan. He believes the drop to a lower weight class puts him one step closer to his goal.

Tyson Griffin and Rafael dos Anjos were awarded matching $30,000 “Fight of the Night” bonuses, according to UFC officials, after they engaged in a spirited confrontation at UFC Fight Night 18. Griffin won a unanimous decision -- 30-27 on all scorecards -- in a fight many felt was much closer than the judges’ scores indicated.

Knocked out by a hellacious Jeremy Stephens uppercut in his UFC debut in November, dos Anjos put Griffin in a compromising position once the action hit the ground. He trapped the Californian in a first-round calf slicer and bent his leg awkwardly behind him. The 24-year-old Griffin -- who had wobbled dos Anjos with a potent right hand earlier in the match -- was visibly hobbled when the two lightweights returned to a standing position and had a difficult time putting meaningful offense together in what remained of the round.

“The leg, as far as serious injuries, is fine,” Griffin told UFC.com. “There was no popping in there, nothing crazy like that. Of course, the calf and quad get stretched a little bit, but a few seconds after being on my feet, it was alright again.”

Griffin dictated much of the rest of the bout with boxing, cage control and aggression. He held dos Anjos at bay with stout punches and a stream of inside leg kicks. The Xtreme Couture lightweight brought dos Anjos back to the ground near the conclusion of round three and was met with an attempted kimura for his troubles. Griffin escaped and iced the victory with some textbook ground-and-pound.

“I expected a very tough Rafael dos Anjos,” Griffin said. “I never once underestimated him and put in as much hard work [for him] as I did for anybody.”

Griffin and dos Anjos were not the only fighters to walk away from the Music City a little heavier in the wallet.

Former WEC welterweight king Carlos Condit went nearly three calendar years between defeats. Prior to his split decision loss to Martin Kampmann at UFC Fight Night 18, the 24-year-old New Mexico native had not lost since he submitted to a rear-naked choke from current Maximum Fighting Championship titleholder Pat Healy in June 2006 … None of welterweight Brock Larson’s last seven bouts have advanced out of the first round, including his 27- and 37-second technical knockouts against Kevin Knabjian and Carlo Prater … The event drew a crowd of 10,267 for a $626,0777 gate, UFC officials announced during a post-fight press conference … Jorge Rivera, his career revived by his appearance on “The Ultimate Fighter 4” in 2006, visited the winner’s circle for the first time in more than a year when he edged UFC newcomer Nissen Osterneck by split decision. Emotions spilled afterward for the 37-year-old middleweight; it was his first appearance in the cage since he lost his 17-year-old daughter, Janessa, to a fatal medication reaction in August … With Ryan Bader’s unanimous decision victory against Carmelo Marrero, “The Ultimate Fighter” winners -- excluding Matt Serra and Travis Lutter -- are now a combined 53-15-1 inside the Octagon.