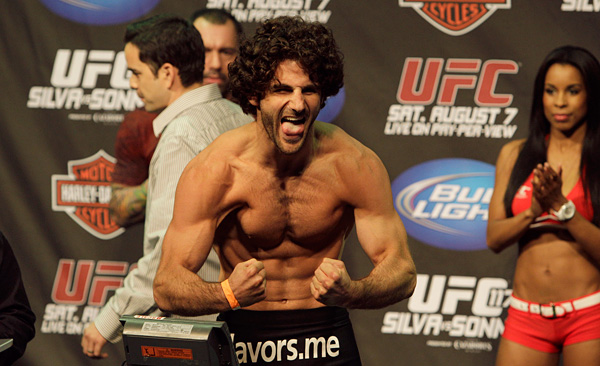 
Charlie Brenneman had won nine of 10 fights, scored an upset over the world-ranked Rick Story on short notice and found himself on the cusp of becoming a Top 10 welterweight. Then, he ran into Anthony Johnson at UFC Live 6 and lasted less than three minutes.

At the drawing board ever since, Brenneman returns to the Octagon at UFC on FX “Guillard vs. Miller” this Friday at the Bridgestone Arena in Nashville, Tenn., as he meets submission specialist Daniel Roberts in a preliminary welterweight matchup. There, he will look to regain some of the momentum he surrendered when Johnson’s head kick leveled him in 2:49 three months ago. Roberts enters on a two-fight losing streak and faces the real possibility of losing his roster spot with another defeat.

Brenneman, a 30-year-old former Spanish teacher from Hollidaysburg, Pa., has never suffered consecutive losses in his career. A tough-as-nails scrapper and superb scrambler, he tends to push a pace that his opponents have a difficult time matching. Based out of the AMA Fight Club in New Jersey, Brenneman wrestled collegiately at Lock Haven University in Pennsylvania, where he posted a Top 12 finish nationally as a senior. He announced his arrival in the UFC in March 2010, when he outpointed 2009 Dream welterweight grand prix finalist Jason High en route to a unanimous decision.

Known as “The Spaniard,” Brenneman is but one of several reasons to tune into the UFC on FX 1 prelims, which will air in their entirety on Fuel TV. Here are four more:

With Jorge Rivera approaching his 40th birthday, one has to wonder how many more punches he has left in the potent hands that have served him so well.

Since making his MMA debut in June 2001, Rivera has been a model professional, forging bouts with some of the sport’s most accomplished fighters, including former UFC middleweight champion Rich Franklin and reigning UFC middleweight king Anderson Silva. Not even the tragic death of his 17-year-old daughter in 2008 kept the Farmingham, Mass., native from excelling in the cage. Upon Rivera’s return, he enjoyed a brief resurgence, as he posted consecutive victories over Nissen Osterneck, Rob Kimmons and Nate Quarry. Such determination speaks to his character.

Alas, back-to-back defeats to “The Ultimate Fighter” Season 3 winner Michael Bisping and Constantinos Philippou left many questioning his place in the 185-pound division. Rivera next faces Brazilian jiu-jitsu black belt Eric Schafer, perhaps with his job on the line.

From Russia with Glove

A world sambo champion, the 23-year-old M-1 Global veteran has dropped anchor at AMA Fight Club and enters the Ultimate Fighting Championship with momentum and confidence to burn. To this point in his development, Nurmagomedov has leaned on a diverse offensive game, with six victories by knockout or technical knockout and six more by submission. None of his last eight foes have survived beyond the second round against him, and he finished six of them in the first. Still, his resume, lacking any victims of note, has to be taken with a bit of skepticism.

Former King of the Cage bantamweight champion and 2009 Sengoku Raiden Championship featherweight grand prix quarterfinalist Nick Denis has never lost on North American soil. That claim will be put to the test when the self-professed Zombie aficionado climbs into the Octagon for the first time with the once-beaten Joseph Sandoval.

Denis, 28, raised some eyebrows in October, when he slammed Bellator Fighting Championships veteran Nick Mamalis into unconsciousness under the Wreck MMA banner in his native Canada. An aggressive competitor willing to take risks, he has yet to go to a decision as a professional.

Sandoval knows all about the pressures and adrenaline associated with one’s first UFC experience. Undefeated at the time, he lasted all of 77 seconds against Walel Watson at UFC Live 6.

His first UFC tour did not go according to plan, as Fabricio Camoes battled Caol Uno to a draw, submitted to a rear-naked choke from Kurt Pellegrino and received his walking papers from management. Now, the 33-year-old Brazilian jiu-jitsu black belt returns as an injury replacement for Rafaello Oliveira and hopes to erase some of those memories.

A decorated submission grappler, Camoes has posted a 9-1-1 mark in his last 11 outings, including consecutive wins over UFC veteran Steve Lopez and “The Ultimate Fighter” Season 8 winner Efrain Escudero. His combat sports history stretches back more than a decade. In 1997, Camoes famously fought Silva, now the sport’s top pound-for-pound fighter, for more than 25 minutes in a bare-knuckle battle in Brazil. Ultimately, he retired from the bout, which, amazingly, was his second on that particular night.

Camoes will lock horns with the undefeated Tom Hayden, himself a late replacement for the injured Reza Madadi.