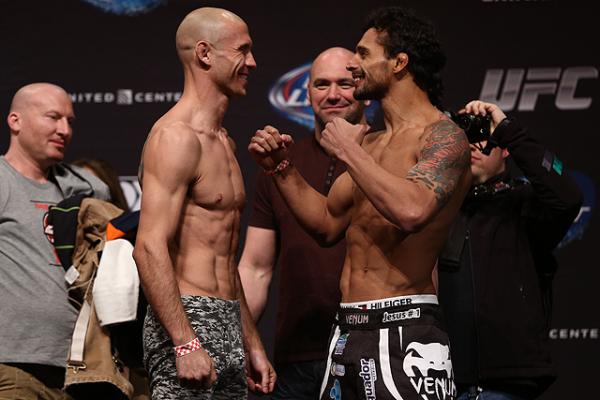 
Donald Cerrone’s right leg was the shining star at UFC on Fox 10 on Saturday in Chicago.

With one kick to the neck of Brazilian Adriano Martins, Cerrone earned the “Knockout of the Night” bonus, moving him past Anderson Silva and Joe Lauzon into first place for the most post-fight bonuses won in Zuffa history. A longtime fan favorite, “Cowboy” appears to be positioning himself for a title shot at 155 pounds.

Oddsmakers had the fight fairly even, which was understandable from a high-level overview. The two lightweights had about the same amount of professional experience, with Martins actually possessing more career wins (25) than Cerrone (21).

Martins was impressive his last time out, submitting Daron Cruickshank with a straight armbar, but he was clearly outclassed against “Cowboy.” Cerrone took a surgical approach to picking him apart, using a varied striking attack with his hands and feet. As time wound down in the first round, Cerrone used two shots to the body to set up his final blow -- which he delivered to Martins’ neck. As his opponent dropped to the canvas, Cerrone lunged downward. Seeing Martins was already out, he refrained from giving him an additional punch, a la Dan Henderson on Michael Bisping at UFC 100.

“I’m back. I feel good,” Cerrone said before turning his attention to ambitious future plans. “I want to set a record for most fights in a year, so if I can get six, that’s [expletive] great. [To] some of those guys out there who said they can’t get fights, hey man, I’m your guy.”

With that said, he did not share the same enthusiasm for a hypothetical matchup with American Top Team’s Cole Miller, who called out Cerrone after submitting Sam Sicilia at UFC Fight Night 35 on Jan. 15.

“Miller is a turd the UFC hasn’t flushed yet,” he said. “Cole Miller, win some fights and then come see me.”

One final note on Cerrone: He featured a Budweiser patch on his shorts and on a vinyl sign used during introductions. While the Bud Light brand has been plastered all over Ultimate Fighting Championship events for years, this is believed to be the first time Budweiser has been advertised on a fighter’s shorts. 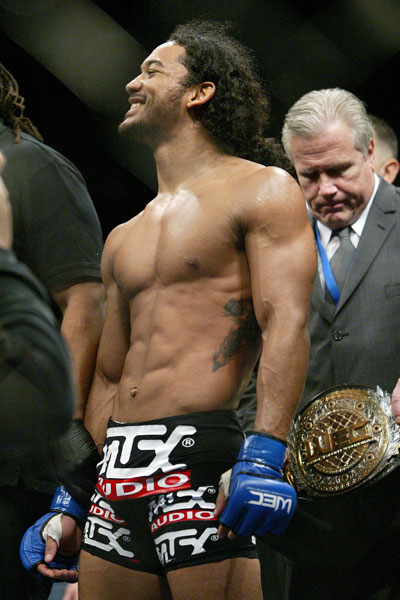 Photo: Sherdog.com
“Smooth” offered no apologies.
Two months ago, one of the most important fights of 2013 ended in a highly controversial split decision, as Georges St. Pierre retained his welterweight title against Johny Hendricks. With that in mind, UFC brass can rest easier knowing that Benson Henderson’s split decision win over Josh Thomson in the UFC on Fox 10 main event is not likely to generate quite the same uproar among its fans.

However, there is still a case to be made that the wrong guy won. As usual, it all depends on what one looks for while watching a fight.

Coming into the bout, Thomson had more to lose than his opponent, as he had already earned a title shot against champion Anthony Pettis. Rather than sit on the sidelines and wait for “Showtime” to recover from a knee injury, Thomson went Chuck Liddell on the division and said he was willing to fight anyone. Enter Henderson.

It may have looked good on paper, but it was hardly a thrilling fight. Thomson broke his right thumb early in the match, and it limited his ability to strike effectively or grapple efficiently. Still, he took it to Henderson for most of the fight. In fact, the only round Henderson won cleanly was the third. Thomson equaled his counterpart’s takedown total and achieved dominant positions more consistently over five rounds.

Still, Henderson was not about to apologize for squeaking by on the scorecards. “Getting a W in the UFC? Let’s see how you take it,” Henderson quipped at the post-fight press conference. “I like Ws. I like getting my hand raised, and I’ll take it any way I can get it: you slip on a banana peel, by the skin of my teeth, by any means.”

Yet, it was not the kind of performance that will have fans clamoring to see Henderson in another title fight with Pettis, who has already beaten him twice. 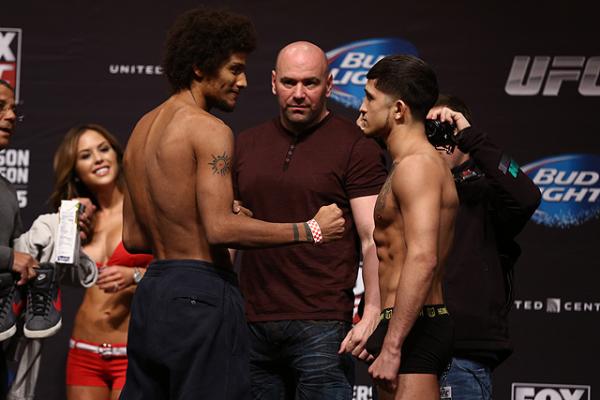 Photo: D. Mandel
Caceres was no stepping stone.
Celebrities in the crowd at the United Center included former World Wrestling Entertainment world champion CM Punk and two-time Stanley Cup champion Jonathan Toews, of the Chicago Blackhawks ... The main card drew 2.55 million viewers to Fox, per the overnight ratings, slightly up from the overnights released after UFC on Fox 9 on Dec. 14 (2.41 million). In typical fashion, the UFC won the key demographics by a wide margin. Equally impressive, the show ranked second behind CBS in total viewership for the two-hour time slot ... After Cerrone, the other star of the night was Alex Caceres, who defeated Roufusport prospect Sergio Pettis. The two bantamweights engaged in a spirited affair, but the 20-year-old Pettis suffered the first loss of his MMA career when he tapped to Caceres’ rear naked choke with just seconds remaining in the third round ... The main card opened with featherweight Jeremy Stephens taking a unanimous decision from Darren Elkins, as he improved to 3-0 at 145 pounds ... Heavyweight Stipe Miocic should have known he was getting the win the moment his three-round fight with Gabriel Gonzaga went to the judges’ scorecards. Gonzaga holds the record for the most finishes in UFC heavyweight history, as he has stopped every opponent in his 11 victories inside the Octagon. True to form, he lost this decision to Miocic, who is quietly working his way into the upper echelon of the division ... It has probably been said that Ramiro Hernandez has been fighting since birth, considering he is the youngest of eight children. Even with former UFC champion Pat Miletich in his corner, the Iowa native could not capitalize on his three-inch height advantage over Hugo Viana. A semifinalist on the first season of “The Ultimate Fighter: Brazil” and a training partner of former UFC heavyweight champion Junior dos Santos, Viana dominated the first two rounds and coasted to victory in the third ... If there is a “Fight God” watching over Henderson, it does not appear as though that hedge of protection extends to his training partners at the MMA Lab in Arizona. Yaotzin Meza came up short in his fight with Chico Camus, losing a unanimous decision to the Milwaukee native. Known more for his standup, Camus displayed some impressive grappling skills in the win ... Former World Extreme Cagefighting champion Eddie Wineland needed less than two full rounds to defeat Canadian Yves Jabouin, who had won four out of five bouts coming into their fight. Wineland dropped Jabouin with a right hand and pounced with heavy blows from the top, forcing the stoppage late in round two.