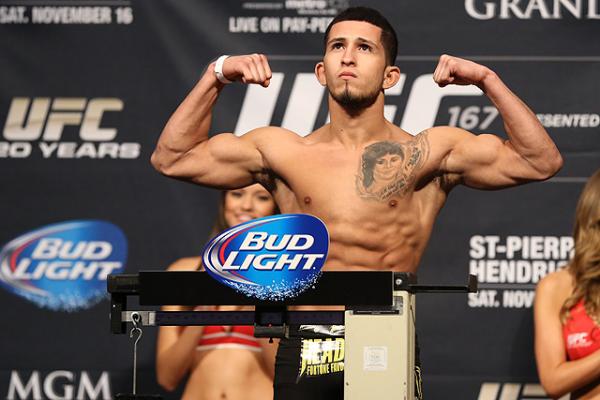 Sergio “The Phenom” Pettis will not turn 21 until August. | Photo: Dave Mandel/Sherdog.com


The Ultimate Fighting Championship on Saturday will return to the United Center in Chicago for UFC on Fox 10.

The last time the UFC visited the Windy City, fans were treated to a masterful performance from reigning flyweight king Demetrious Johnson, who ran circles around John Moraga in the headliner with a deft agility akin to that of a young Dave Corzine.

While it is true that the latest Fox network broadcast will feature some considerable star power, the preliminary draw is anything but shabby. Highlighting the Fox Sports 1 bill is Sergio Pettis, arguably the UFC’s finest fun-sized prospect.

“The Phenom” will step into the cage opposite “The Ultimate Fighter 12” alumnus Alex Caceres on the strength of a perfect 10-0 professional record. While I personally believe Pettis would be better suited to compete as a flyweight given his frame and past difficulties with longer opponents like Jimmy Jones, the 20-year-old has nevertheless chosen to dedicate himself to 135 pounds for the time being.

The younger brother of reigning lightweight champion Anthony Pettis, the Roufusport product made a successful-if-not-flawless Octagon debut against veteran Will Campuzano in November, taking a unanimous decision from his more experienced opponent at UFC 167. Like his older sibling, Pettis possesses a rare combination of wicked standup and capable submission skills, and his compact frame affords him plenty of scrambling ability -- a must-have quality, especially for a bantamweight.

Pettis’ promise has made him one of the UFC’s most hyped signings in recent memory, but catching “The Phenom” in action is just one reason to tune in to the UFC on Fox 10 undercard. Here are four more:


In Caceres, Pettis will face no pushover. In fact, I think he is a pretty live underdog.

Caceres owns the physical attributes and skills to give the 20-year-old some issues. I do not know whether “Bruce Leroy” will win this fight, but I would bet against him getting stomped. “The Ultimate Fighter 12” graduate’s long and wiry frame should serve him well against Pettis, who will no doubt be the smaller man come fight night.

In my opinion, Caceres should assume the role of aggressor in this fight. Too often, I have seen him clown around on the outside and wait for his opponents to make the first move. When Caceres initiates the standup and uses his rapidly improving jab to set a range, he looks like a real pro out there. If and when this fight hits the floor, Caceres should be able to hang with his highly touted foe. The Floridian owns a pair of spidery legs that he can use in a variety of tricky ways, from setting up triangle chokes to simply keeping his opponent off-balance with butterfly hooks.

Pettis will likely receive most of the press heading into this fight, but I am really interested to see how Caceres fares against the up-and-comer. You should be, too. 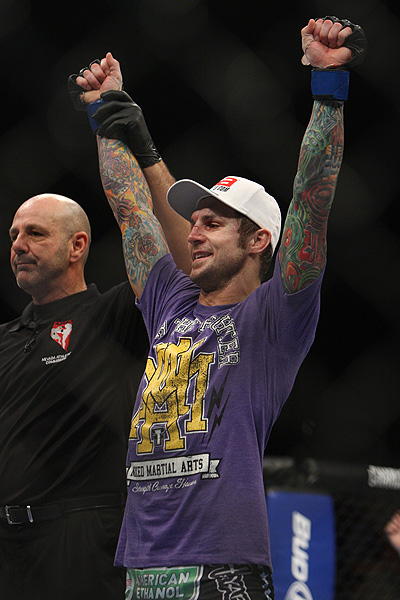 Photo: Dave Mandel/Sherdog.com
Wineland welcomes brawls.
After a failed attempt at winning the interim bantamweight title from Renan Barao, Eddie Wineland will now look to work his way back up the ladder, starting with Canadian striker Yves Jabouin.

Though Wineland has never been one to shy away from a good standup exchange, he might be better served to use what should amount to a considerable wrestling advantage against Jabouin, who, for all his other faults, still holds the ability to separate any bantamweight from his consciousness if he connects flush. “Tiger” has quietly won four of his last five fights, with his only loss in that span coming to Brad Pickett in a thrilling one-rounder back in 2012.

Wineland, meanwhile, saw a two-fight winning streak snapped by Barao, who floored the former World Extreme Cagefighting champion with a spinning back kick to the forehead before pounding him out for the technical knockout.

Will Wineland stand and throw down with the Quebecer or will he take a more conservative approach and attempt to put the 34-year-old on his back?


How can you not love Hugo Viana?

I still think about his knockout of Reuben Duran and smile from time to time. Duran deserved a lot of credit for his toughness during that beating, but there was absolutely no stopping “Wolverine” that night. Although the Brazilian ran into an unforgiving T.J. Dillashaw in his next fight, I would not be too quick to hold that against him. After all, Dillashaw may well challenge for the bantamweight title soon.

Viana is definitely still refining his technique, but he already holds the raw power and aggression needed to become something special. If he continues to fine-tune his game, I think we could see him knocking on the door of the top 10 by next year.

“Wolverine” will now face Ramiro Hernandez, who was quickly submitted by Lucas Martins in his UFC debut in September. Can Viana rebound from his defeat to Dillashaw and hand “Junior” his second straight loss or does Hernandez have an upset awaiting the favored Brazilian?


While the Pettis brothers receive the majority of the attention coming out of Milwaukee, the Roufusport camp has also quietly produced a capable bantamweight in Chico Camus.

Though not the largest 135-pound fighter in the UFC, Camus nevertheless possesses some real power in his right hand, which he can snap off from a variety of positions. While “King” is by no means a ground specialist, his grappling is improving with every fight, a fact that could make him dangerous for most of the division in the years to come.

With three Octagon appearances now under his belt, the 28-year-old will square off with Yaotzin Meza, who looks to build on the momentum gained from his July submission victory over “The Ultimate Fighter 14” alum John Albert. Which of these bantamweights will secure his second straight UFC win?