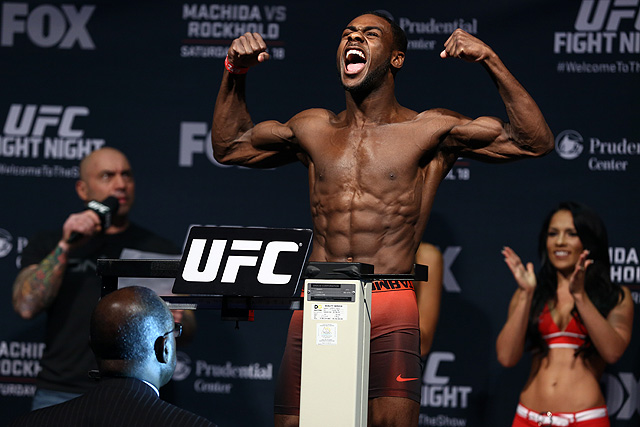 
Aljamain Sterling has graduated from lauded prospect to top-10 contender at 135 pounds.

The undefeated Serra-Longo Fight Team bantamweight took care of former World Extreme Cagefighting title challenger Takeya Mizugaki at UFC on Fox 15 on Saturday at the Prudential Center in Newark, N.J., and he did so in sublime fashion. Sterling submitted the Japanese veteran with an arm-triangle choke from guard, coaxing the tapout 2:11 into round three.

“My game plan was to come in and, when he tried to throw that right hand [and] tried to weave underneath, crack him with a head kick,” Sterling said in a post-fight media scrum. “It didn’t work out the way I wanted. I think I telegraphed a little bit too much with my kicks, but I think it kept him guessing and it opened up the opportunity for me to get my takedowns; and that’s where I ultimately want to get him: on the ground and take him to my strong point where he’s weakest.”

Sterling executed three takedowns on Mizugaki and passed his guard twice, according to FightMetric data. While questions remain regarding his standup, the “Funk Master” has no doubt that he possesses the tools necessary to excel on the feet.

“I do it in the [training] room,” Sterling said. “I just haven’t had a chance to really ... I haven’t really been forced; someone has never really been able to keep me up standing long enough where I get to show you guys what I’ve been doing in the room with my standup. I almost feel like when I come out there, I’m fighting these guys who just like to throw bombs.

“I’m not about that,” he added. “I’m not in [it] to go in there and bang. I want to prolong my career and hopefully have a long, lengthy career. [I’m] not going out there to be in these Rock ’Em Sock ’Em Robot wars. I think it’s just silly when I can go out there and kind of just show that I’m the superior athlete and definitely the tougher, more durable fighter.”

A former Cage Fury Fighting Championships and Ring of Combat titleholder, Sterling now owns a 3-0 record in Ultimate Fighting Championship competition. He has finished his last two opponents but sees room for further improvement, even after dispatching someone as respected and experienced as Mizugaki.

“I feel like it wasn’t decisive enough,” Sterling said. “I’m hard on myself. I didn’t get to do the things I really wanted to do. There’s a lot of things I want to do out there. I think that’s probably what it is. I’m so wrapped up in trying to do all these things I’m doing in the [training] room.”

Like most New York natives under Zuffa contract, Sterling hears talk of a potential UFC event at Madison Square Garden in December. MMA has not yet been legalized in the Empire State, though that could soon change. 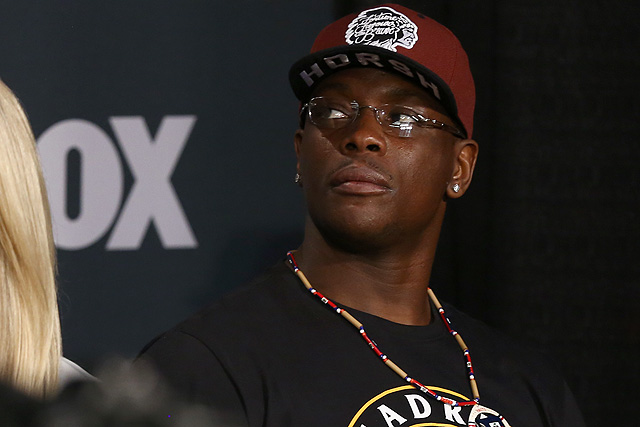 Photo: D. Mandel/Sherdog.com
Ovince St. Preux felled another foe.
Onetime Strikeforce champion Luke Rockhold was not surprised with the manner in which he dismantled Lyoto Machida in the main event. “I kind of told you what I was going to do. If it touched the ground, we’re going to be operating on different wavelengths. I knew I could dominate him. I just got good position, and not many people can get away from me,” the American Kickboxing Academy ace said during the post-fight press conference. Rockhold brutalized Machida with ground-and-pound before dispatching him with a second-round rear-naked choke, staking his claim as the No. 1 contender at 185 pounds ... Kings MMA lightweight Beneil Dariush continued to build momentum with his unanimous decision over Jim Miller. A little more than a month after he tapped Daron Cruickshank with a rear-naked choke at UFC 185, the 25-year-old Brazilian jiu-jitsu black belt stepped in on short notice for the injured Paul Felder. “I’m going to have to take a little more time between fights. Thirty days is a little too short. Consistency is important. If you don’t fight ... you’re a fighter, you should fight. If you don’t fight, you’re going to slow down,” Dariush said ... Surging light heavyweight threat Ovince St. Preux impressed yet again, as he wiped out two-time NCAA All-American wrestler Patrick Cummins with a left uppercut and follow-up hammerfists. “I expected him to go for the takedown. I mean, I knew I was going to get taken down. It was just a matter of if he could hold me down, and I knew he couldn’t. When I cracked him, it was all I needed,” St. Preux said ... Gian Villante landed 30 of the 34 leg kicks he attempted against “The Ultimate Fighter” Season 19 winner Corey Anderson ... Tim Means’ arm-triangle choke finish on George Sullivan represented his first submission victory in nearly four years ... UFC President Dana White supported the cageside physician’s decision to recommend a stoppage in the Diego Brandao-Jim Hettes undercard clash. Hettes suffered significant damage to his left ear, the result of a well-placed elbow strike from Brandao in the first round. “Listen, we don’t need an ear falling off on Fox, OK? That was bad,” White said. “At first, I was like, ‘Are you kidding me? They just stopped that fight.’ That was starting to look like a really, really good fight; and then I really saw the ear. You start taking shots or a finger gets in that ear, yeah, it’s no good.”