Before Rafael dos Anjos and Donald Cerrone battle for the Ultimate Fighting Championship lightweight belt in the UFC on Fox 17 main event on Saturday at the Amway Center in Orlando, Fla., there will be a clash of the titans in the co-headliner. Alistair Overeem and Junior dos Santos were supposed to fight twice already, but a failed drug test and an injury to the Dutchman derailed the bout until now.

The first and final Strikeforce heavyweight champion, Overeem has struggled to maintain success since dispatching Brock Lesnar in his UFC debut. Though he brings a total 4-3 UFC record into the fight, he is coming off his first back-to-back wins since 2011. “The Demolition Man” was last in action against Roy Nelson in March, when he took a measured, clear-cut decision.


Dos Santos has been on the shelf all year recovering from knee surgery. The Brazilian bruiser was last seen against Stipe Miocic at UFC on Fox 13, where he outworked the Ohio native for a hard-earned unanimous decision. Prior to that, he was on the wrong end of a second beatdown at the hands of then-champion Cain Velasquez. Since losing his belt in 2012, “Cigano” has only fought three times.

This is a high-stakes fight. In the thin heavyweight division, the winner will immediately be shortlisted for title contention, while the loser will go back to square one. Let us see what the Tale of the Tape has to say: 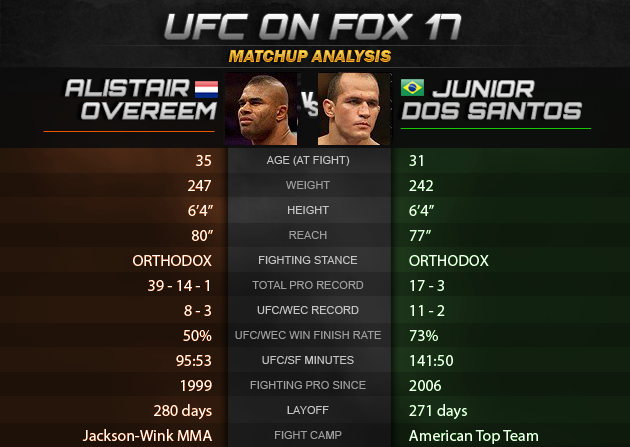 Based off of their most recent weigh-in results, Overeem and dos Santos are nearly anthropometric mirror images. Overeem’s additional three inches of reach is the only notable difference, and since this will likely be a standup affair for the duration of the bout, that advantage could play an important role in the outcome.

Overeem is a true veteran of the sport. He cut his teeth on the biggest stages in Europe and Japan for most of his career, becoming a mainstay of Pride Fighting Championships, K-1, Dream and Strikeforce before signing with the UFC. With 54 MMA fights and 14 professional kickboxing bouts under his belt, there is little that Overeem has not seen in his career. On the other hand, he has been tacking on miles for nearly two decades, which may have taken its toll on him already; his last five losses dating back to 2007 have all been by knockout or technical knockout. Dos Santos is four years younger and started fighting professionally seven years after Overeem. As a result, he has less than half the number of fights that Overeem has had. With that being said, “Cigano” is a former champion who has logged the fifth-most Octagon minutes in the history of the UFC heavyweight division, so he is by no means inexperienced.

The layoff throws an element of unpredictability into the equation. Overeem fought more recently and did not take any meaningful damage, but dos Santos could feasibly be the fresher fighter. It will be interesting to see how dos Santos looks after a year of inactivity and rehabilitation: He may very well perform better than he did against Miocic, who he fought injured. At the same time, the specter of ring rust could also materialize, making their layoffs one of the more prominent question marks surrounding the fight.

It is also worth noting that both men come from renowned camps marked with mixed results. Since joining Jackson-Wink MMA in 2014, Overeem has gone 2-1. If he were to lose to dos Santos, he would have a .500 record with one of the premier camps in the world. That would not be a good look, especially for someone who came to the UFC with such high expectations. Then there is dos Santos, who trains out of Nova Uniao. The Rio de Janeiro-based gym has been criticized for antiquated, unhealthy training practices in recent history, and two of its fighters have come up short in high-profile title fights in 2015. In this way, the reputation of the respective camps is also on the line.

The striking matchup should prove to be fireworks. Here is what the numbers tell us: Both Overeem and dos Santos have earned their reputations as fearsome strikers, but they come about their success through different means.

Since he started fighting for the UFC, Overeem has adopted a patient and precise striking game. His output is still on the higher end of the spectrum of heavyweight fighters, which is impressive in lieu of his defense and striking accuracy; he is the all-time UFC heavyweight leader in significant strike accuracy. The former K-1 World Grand Prix winner is an opportunistic and diverse striker who stays at distance until he sees an opening, whereupon he utilizes his reach to throw sapping punch-kick combinations. A total of 63 percent of his strikes are aimed at the head, while 28 percent are to the body and nine percent to the legs. That is more evenly distributed than most fighters, in any weight class. Even more impressive is Overeem’s balanced range: 38 percent of his strikes are at distance, with 23 percent coming in the clinch and 39 percent on the ground. The numbers paint a picture of a lethally effective, unpredictable striker who is capable of ending the fight at any given moment with a single punch.

Despite Overeem’s impressive striking resume, “Cigano” may be his foil. Dos Santos works at a higher rate, especially when he is able to dictate the exchanges, which he has been able to do against all of his opponents not named Velasquez. Dos Santos is the UFC heavyweight all-time leader in both significant strikes landed and knockdowns. He tends to stay at range and capitalize on his athleticism, throwing powerful 1-2 punch combos to the body and head of opponents, occasionally setting up those exchanges with a variety of kicks in his arsenal. His numbers are more in line with common striking averages: 77 percent of his strikes are aimed at the head, with 21 percent to the body and only two percent going to the legs. His preferred range is no surprise: 85 percent of his strikes come at distance, with 10 percent and five percent in the clinch and on the ground, respectively. Dos Santos is quite possibly the division’s premier knockout artist. He has found a striking-related finish in almost three quarters of his UFC wins.

While both men are certainly capable of ending the fight with a single punch, Overeem is more readily wilted by those punches. If we take their last seven fights -- starting from Overeem’s UFC debut -- the knockdown numbers start to really favor Dos Santos. He has scored two more knockdowns, six of them, in that timespan and has been knocked down only twice -- half as many times and Overeem and both of them from Velasquez. “Cigano” should definitely respect Overeem’s power, but he has a bigger margin for error.

The matchup will most likely take place on the feet, but here is what a fight on the mat would look like:

Overeem and Dos Santos are predominantly strikers and use their grappling for mostly defensive purposes.

Dos Santos is an excellent defensive wrestler. Only Velasquez, Miocic and Shane Carwin have been able to complete a takedown against him, and most of the time he did not stay on the ground for long. His offensive wrestling is serviceable, his timing and athleticism largely compensating for technical deficiencies. He has mixed in occasional takedowns in the past, usually as a means to orchestrate future striking exchanges more so than work from the top. His lone submission attempt came in the fifth round of his rubber match with Velasquez, and it could hardly be considered a legitimate attempt to end the fight. Earlier in that same fight, dos Santos defended the one submission attempt on him in the UFC, when Velasquez followed up a knockdown with a sweaty guillotine that slipped right off. In both of the fights that he went to the ground and made any kind of positional advance, dos Santos did not do any meaningful damage.

Overeem has some grappling accolades to his name, but he also tends to use his skills to keep the fight standing. He works for takedowns more often than dos Santos, often from the clinch. Once the fight hits the ground, however, Overeem has a strong base and technical passes. He is much busier and more prone to work on the ground, where he throws a significant percentage of his overall striking output. He has not attempted any submissions in the UFC -- the three attempts noted above all come from his 2007 Strikeforce win over Paul Buentello -- and has only evaded a single submission in the organization, which came in his win over Frank Mir.

The grappling matchup could very well come into play in terms of how it relates to the striking matchup. Dos Santos requires distance to get into his striking rhythm, whereas Overeem is at his most dangerous in the clinch. How long the fight will stay in the clinch and how it will go to the ground from there -- if at all -- could lead to a fight-ending sequence.


As it stands, dos Santos is anywhere between the -341 to -375 favorite, and Overeem is the underdog in the range of +250 to +290. He is a live ’dog with a diverse set of weapons to win, but it is hard not to favor the younger, less worn down knockout artist here. The matchup itself is compelling, and there are plenty of conceivable ends to the fight for both men. With the winner possibly getting the next crack at championship gold, it is a make-or-break fight that carries divisional significance. “Cigano” will either advance a bid for his fifth title fight or Overeem will make it one step closer to cashing in on the expectations with which he arrived.