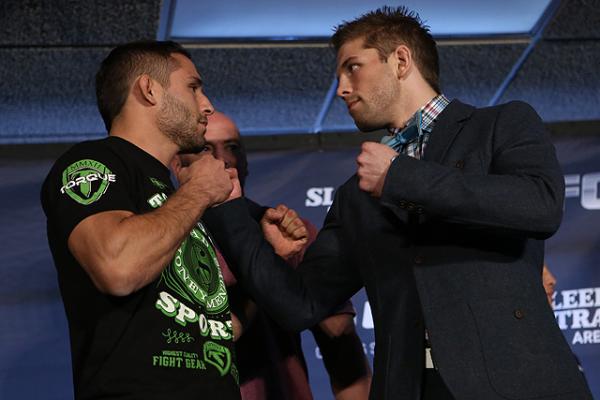 Nik “The Carny” Lentz faces perhaps the sternest test of his career at UFC on Fox 9. | Photo: Dave Mandel


Chad Mendes has long had his sights on a rematch with Ultimate Fighting Championship featherweight titleholder Jose Aldo, and Nik Lentz relishes the idea of thwarting those plans.

Lentz will lock horns with Team Alpha Male’s Mendes in a featured 145-pound battle at UFC on Fox 9 “Johnson vs. Benavidez 2” on Saturday at the Sleep Train Arena in Sacramento, Calif. The American Top Team representative will enter the cage with plenty of confidence despite his being labeled a better than 4-to-1 underdog.

A former lightweight, Lentz has blossomed since relocating to the 145-pound division. The 29-year-old El Paso, Texas, native has rattled off three consecutive victories against Eiji Mitsuoka, Diego Nunes and Hacran Dias, emerging as one of the world’s top 10 featherweights. Lentz points to the work he has put in since joining American Top Team.

“I always think I’m going to win, no matter what,” he said. “Now, I actually have the tools and the training, the coaches, everything to put it together. I look back on my career and what I was doing, and I’m amazed I was able to win so much based on the training that I have now. I’m a completely different person. There are just little tweaks every day that people are fixing. They can recognize the talent and then they can tailor my style to being one of the best strikers in the division, best wrestlers in the division, best grinders in the division [or] best jiu-jitsu guy.

Lentz wrestled collegiately at the University of Minnesota and believes his grinding style can pose problems for Mendes, who was a two-time NCAA All-American and two-time Pac-10 conference champion at California Polytechnic State University. “Money” has never been taken down in his UFC career.

“I’m by far the best wrestler in the division,” Lentz said. “I’m not a strict, regular wrestler anymore. I’m an MMA-style wrestler. My style of wrestling is the best, not only in the division but in the world. No one’s been able to stop it. Everyone can say they’re going to stop it or move away or get it, but once I get a hold of them, they’re never going to get away.”

With a victory over the once-beaten Mendes, Lentz would almost certainly move to the front of the line of potential title contenders. For now, he remains focused on the considerable challenge at hand.

“I don’t think I’m going to walk through everyone,” Lentz said. “I take everyone extremely serious, and right now, all I care about is beating Chad Mendes. After I beat Chad Mendes, I’ll worry about Jose Aldo.” 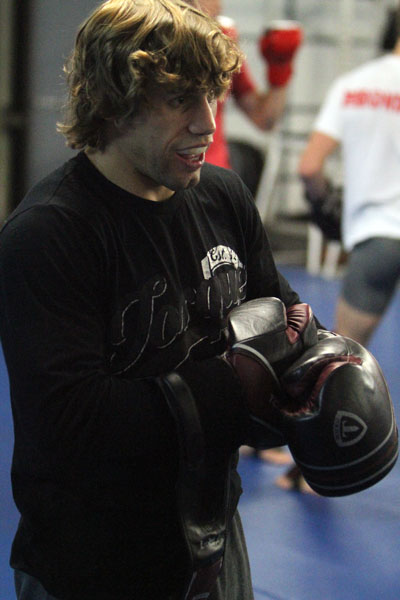 Photo: D. Mandel
Faber has never lost a non-title bout.
Urijah Faber has arrived at an interesting junction in his career, content with his place in history but not yet ready to walk off into the sunset.

The 34-year-old Team Alpha Male patriarch will collide with the uber-promising Michael McDonald in the UFC on Fox 9 co-main event, as he seeks a fourth consecutive victory inside the cutthroat bantamweight division. Faber, who has never lost a non-title fight in his career, last fought at UFC Fight Night 26 in August, when he withstood a furious challenge from Iuri Alcantara to post a unanimous decision at the TD Garden in Boston.

The passion for his craft has never been stronger.

“Right now, I love what I’m doing,” Faber told Sherdog.com. “I don’t want to go until my 40s and those late years necessarily. I’ve probably got about three more years of me being completely focused on this. In the meantime, I’m spending my spare time doing things that are helping build for the future. If I want to stop, I will, and if I want to continue going, I will.”


The Ultimate Fighting Championship has not staged an event in California’s capital city since UFC 73 “Stacked” on July 7, 2007. That show featured a pair of title fights, as Anderson Silva retained his middleweight crown with a first-round technical knockout against Nate Marquardt and Sean Sherk defended his lightweight championship with a unanimous decision over Hermes Franca ... Joe Lauzon has been awarded 12 post-fight bonuses -- six for “Submission of the Night,” five for “Fight of the Night” and one for “Knockout of the Night” -- totaling roughly $600,000 during his UFC career ... Flyweight champion Demetrious Johnson hails from Madisonville, Ky., a small 18.5-square-mile town of less than 20,000 people in the western part of the Bluegrass State ... Ryan LaFlare played lacrosse at Farmingdale State College, where he still ranks first on the school’s all-time list in career goals scored (131) and second in points (162) ... Onetime Ring of Combat champion Edson Barboza has stopped three different opponents with leg kicks: Rafaello Oliveira, Mike Lullo and Marcelo Guidici ... Bobby Green is one of eight men to have held the King of the Cage junior welterweight championship, along with Joe Camacho, Victor Valenzuela, Ricky Legere Jr., Tim Means, Tony Hervey, Derek Campos and Lowen Tynanes ... Former Bellator MMA titleholder Zach Makovsky wrestled collegiately at Drexel University, where he won 72 matches during his four-year career ... Cody McKenzie appeared on Season 12 of “The Ultimate Fighter” reality series and reached the quarterfinals, where he was joined by Nam Phan, Alex Caceres, Michael Johnson, Jonathan Brookins, Sako Chivitchyan, Kyle Watson and Aaron Wilkinson ... Roger Bowling has delivered five finishes in less than a minute ... When Shooto, Strikeforce and Dream veteran Darren Uyenoyama was born on Oct. 15, 1979, the top five songs on Billboard’s Hot 100 list were Michael Jackson’s “Don’t Stop ’Til You Get Enough,” Herb Alpert’s “Rise,” Robert John’s “Sad Eyes,” the Commodores’ “Sail On,” and The Knack’s “My Sharona.”