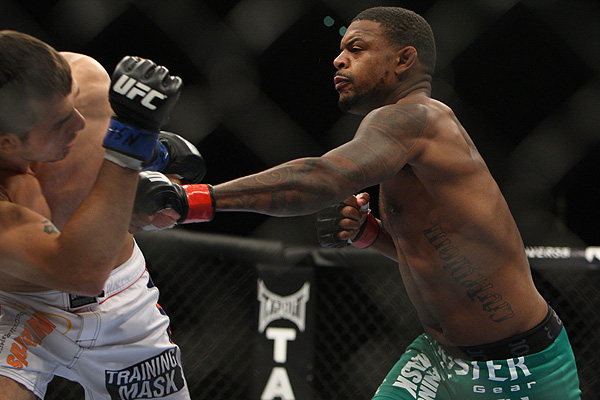 Michael Johnson will fight for the first time since his winning streak was snapped. | Photo: Dave Mandel/Sherdog.com


After taking a two-week break from corrupting our minds with violence and nu metal, the Ultimate Fighting Championship returns to Stockholm on Saturday for UFC on Fuel TV 9, also known as UFC “Bork, Bork, Bork 2.”

Here are five reasons to grab yourself a big old spoonful of lingonberries and fire up the Internet for the UFC on Fuel TV 9 undercard:


Will Michael Johnson’s defeat at the hands of Myles Jury prove to be a speed bump or a sign of things to come?

Like most people, I expected Johnson to mow down Jury at UFC 155. Even more shocking than Jury’s victory was the ease with which he shut down the Blackzilian’s game, continually putting Johnson on his back and punishing him with ground-and-pound. The loss snapped a three-fight winning streak for “The Menace,” who entered the Dec. 29 bout on the strength of an impressive come-from-behind knockout over the highly regarded Danny Castillo in October.

Like Johnson, opponent Reza Madadi was also defeated in his last Octagon outing, as the “Mad Dog” suffered a controversial split decision loss at the hands of Cristiano Marcello. Though the Iranian-born Swede has displayed solid wrestling and submission skills during his six-year career, I do not believe he has ever before faced an athlete the caliber of Johnson, who has also significantly improved his standup technique over the last year.

Can Madadi follow Jury’s blueprint and put “The Menace” on his back, where he has shown to be most vulnerable or Will Johnson right the wrongs of his previous performance and get back in the win column?


Are we absolutely certain that Adam Cella is OK after eating that spinning heel kick from Uriah Hall? The doctors were able to sew his head back on and everything, right?

You have to give it to Cella. It takes a hell of a lot of courage to sign on the dotted line again after suffering a knockout like that, especially when your next opponent is a boss like Tor Troeng. “Ultimate Fighter 17” fans should not let Troeng’s nasty knockout loss to Josh Samman dissuade them from watching the Swede work. Samman is kind of a stud, and that is all there is to it.

With that said, it would be unwise to underestimate Cella, who, if you will recall, gained entry into the “Ultimate Fighter” house by snatching a slick armbar off his back to send Alaskan prospect Jake Heun packing. Which reality show talent will shine on the big stage?

I will not lie to you. I certainly did not expect this. During his time on “The Ultimate Fighter 14,” Brimage struck me as a talented but limited guy who would likely be outclassed when facing a serious grappler or kickboxer. He was athletic and he hit hard, but that was about it.

I may have spoken too quickly. Brimage has started to put it all together since his exhibition defeat at the hands of Bryan Caraway, outpointing castmate Stephen Bass at the live finale before hanging with Sengoku standout Maximo Blanco en route to a split decision win last year at UFC 145.

Brimage’s most impressive victory might have been his most recent one. “The ’Bama Beast” entered the cage as more than a 3-to-1 underdog at UFC 152 and straight took care of business against submission ace Jim Hettes, handing “The Kid” his first career loss in a solid 15-minute performance. Can Brimage keep the ball rolling against Irish standout Conor McGregor?


Make no mistake, McGregor is way more Thin Lizzy than he is U2. Brimage will need to keep his chin down and his hands high if he hopes to turn away the surging southpaw from Dublin.

“Notorious” owns 11 of his 12 career wins by knockout, and it is easy to see why. McGregor gauges his distance quite well when he throws straight punches, which is most of the time, and his footwork allows him to take advantage of his opponents when they overextend. I am particularly fond of his lead-hand uppercut and the way he can overwhelm a man by turning a three-punch combination into an extended 10-strike flurry.

Sometimes when the Irishman throws a one-two, you will swear he is the long lost Diaz brother. However, unlike the boys from Stockton, Calif., McGregor will also mix in a spinning heel kick if the mood strikes him, along with his whipping rear-leg round kick. When the fight hits the floor, he tries to put his opponents’ skulls through the mat with his ground-and-pound. Simply put, wherever the fight goes, he is looking to hurt you.

Still, in spite of all of his strengths, the two-division Cage Warriors Fighting Championship titleholder has shown the tendency to throw a little wild and drop his hands -- a fact that Brimage could potentially exploit with his powerful overhand left.


I was tempted to just skip this fifth section to avoid jinxing Michael Kuiper again.

Can you believe that Kuiper had four -- yes, four -- opponents pull out of his UFC on FX 7 booking due to either injury or illness? I was recently informed by reliably funny but entirely imaginary sources that this series of unfortunate events finally resulted in the 23-year-old sitting around by himself on fight night with four pints of New York Super Fudge Chunk watching “Golden Girls” reruns and spontaneously belting out sections of “Eli’s Comin’” by Three Dog Night.

I think a match with the “Filthy” one will tell us much about Kuiper and his immediate plans at middleweight. Lawlor comes at his opponents like a junkyard dog and goes hard for a full 15 minutes, a fact that could result in a long night for Kuiper, who has experienced cardio issues in the past. However, if the prospect can use his judo to shuck off Lawlor’s takedowns and tee off on the seasoned wrestler like he did against Jared Hamman, I think Kuiper could surprise some folks and pull off an upset.