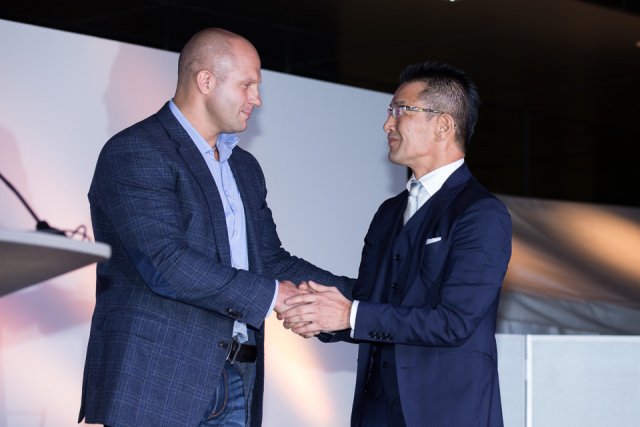 Without fighter safety, there is no mixed martial arts. Yet the term “fighter safety” has become stagnant; an empty trope in need of reexamination and repair.

There are many reasons why, and none can be mended with minor stitching. An entire cultural shift is necessary to ensure fighter safety is practical, meaningful and accessible for fighters, coaches, promoters and regulators.

At UFC 192, flyweight contender Ali Bagautinov returned from a year-long suspension for performance-enhancing drugs (PEDs). In the week leading up to his Oct. 3 bout with Joseph Benavidez, the Russian revealed that he had not been tested for PEDs. While the Ultimate Fighting Championship’s partnership with the U.S. Anti-Doping Agency (USADA) could be a great thing, it is hard to see the benefit when PED offenders aren’t held to more stringent standards.

Another important note: If a fighter tests positive after a fight, the organization has already made its pay-per-view and sponsor money. If it reflects poorly on the UFC, there will be another fight night in a week to sweep it under the rug, while the fighter bears the brunt and falls out of sight. However, if a positive test comes to light before an event, it stands to ravage the company’s bottom line and allows the PED conversation to stay at the forefront.

The UFC’s ever-expanding schedule supports the old adage: “The show must go on.” Zuffa made it through 11 years without having to cancel an event, until August 2012 when the notorious UFC 151 became a black mark on the company’s history. Two years later, UFC 176 would be canceled as well.

There is little that stops the UFC from going forth with a scheduled event -- even questionable drug tests. According to Josh Gross’ recent Deadspin report, UFC allegedly knew that Vitor Belfort’s testosterone levels were elevated prior to his UFC 152 main event title fight against then-light heavyweight champ Jon Jones in September 2012. It took three years for the results to come to light, but the importance of this report cannot be overstated. If UFC knew about Belfort’s elevated testosterone in ahead of the fight in Toronto and claimed the Ontario commission forbid the results to be released -- the commission says that was not the case -- isn’t that enough misdirection to suggest a known, uneven playing field?

In fact, it undermines fighter consent to fight if the promoter knew but didn’t make Jones aware. It borders on unsanctioned, which could categorize Belfort fighting Jones as assault rather than a regulated event. UFC has done little to combat the story aside from UFC VP of Public Relations Dave Sholler calling claims of a cover-up “categorically false” at UFC 192’s post-fight press conference.

UFC acknowledged Belfort’s testosterone use in early 2013 after he knocked out Michael Bisping, who has had eye issues ever since. Belfort was given a title shot to end 2014, even though he admittedly started the year losing that same shot because he tested positive for elevated testosterone. Belfort fought for yet another belt in the last 12 months. This issue hasn’t gone away, nor should it.

The manner in which the UFC handles PEDs should not go unexamined just because the company aligned with USADA, especially because Thomas Hauser’s article about USADA’s less-than-above-board dealings related to Floyd Mayweather Jr. have major implications for the UFC relying on USADA to clean up the sport.

UFC has long held that its brand of MMA is the safest sport because it is regulated by the government. Following multiple UFC Fight Pass-broadcast hearings of the Nevada Athletic Commission (NAC), it should be clear that this was simply a way to pass the buck. After Nick Diaz’s non-PED-related five-year suspension, it’s obvious that such government regulation doesn’t always work in the interest of fighter safety.

The NAC slapped Belfort on the wrist in 2014 on the condition he fight in their state -- read: bring them the money -- upon his return. (He did.) Anderson Silva, a middleweight, hit welterweight Nick Diaz in the head with 55 significant strikes in January while PEDs were in his system and was hit with one-fifth the punishment Diaz received for using marijuana.

Alongside PEDS, weight-cutting should be on top of the list regarding fighter safety.

UFC 192 put weight issues at the sport’s forefront when Johny Hendricks’ body seized on him, blocking the former welterweight champ from hitting his intended 171-pound limit. The takeaway from Hendricks’ mishap is the UFC needs protocol for weight-cutting beyond fight week. If fighters are required to report their whereabouts to USADA, it’s not out of question to report their weights when starting camp so they don’t start 15-pounds above their optimal training camp the way Hendricks did. When Renan Barao passed out making weight in 2014, the response was more anger than concern, and that reared its head again with Hendricks. New, thorough protocol throughout the entire process would go a long way.

Another change in the fighter safety landscape is cutman Jacob “Stitch” Duran’s unceremonious dismissal for speaking out on the UFC’s Reebok sponsorship deal. His presence on UFC broadcasts for the last decade signaled that fighters had the most high-end care in their corner. That’s not to say Don House or other cut men still working UFC events aren’t top notch, but there is a reason the almost unanimous reaction from fighters was that “Stitch” will be missed. To deem Duran expendable was to overlook how much he did and could still do for fighter safety.

Furthermore, firing Duran reminded all that job security is fleeting at best. He was let go as a casualty of the overall uproar Reebok caused regarding a fighter’s financial viability. It’s true the realm of fighter safety extends itself to economic realities. MMA fighters, like boxers, don’t have pensions or protection through organizing the way stick-and-ball sports do. Is it sound for a fighter to enter a market where their value is determined for them by a deal they never negotiated? It limits their retirement potential when they should be alongside their pro-athlete contemporaries.

The UFC being clear industry leader has -- justly or unjustly -- centralized the fighter safety debate to their operations. It’s about the entire sport though.

Spike TV, which broadcasts Bellator MMA, recently announced that it will air Fedor Emelianenko’s return in the new Japanese promotion from former Pride Fighting Championships boss Nobuyuki Sakakibara. Emelianenko, widely regarded as the best heavyweight in MMA’s young history, is rumored to face Jaideep Singh, a former kickboxer with an MMA record of 1-0 who isn’t even elite in his own combat sports discipline. It’s entirely against the interest of fighter safety -- at least for Emelianenko’s opponent. That’s the kind of experience discrepancy that shouldn’t be sanctioned -- and, of course, won’t be in Japan, which has no sanctioning body for MMA. How much does Bellator plan to commit to clean sport as it continues its growth? The same question should be asked of World Series of Fighting. MMA is not a game with concussive consequences like football. Martial arts, including the mixed kind, are designed to maim or kill an opponent in unarmed combat. No deaths have hit the UFC or major MMA yet, but we don’t want to arrive at that day wildly under-prepared -- or worse, culpable.

The current climate begs for changes to move the sport past its often troubling track record with PEDs. There is an opportunity to incorporate best practices for all facets of fighter safety going forward, or else forever be haunted by an IFL ambulance driving its flashing sirens through the sport’s collective legitimacy.

Danny Acosta is a SiriusXM Rush (Channel 93) host and contributor. His writing has been featured on Sherdog.com for nearly a decade. Find him on Twitter and Instagram @acostaislegend.