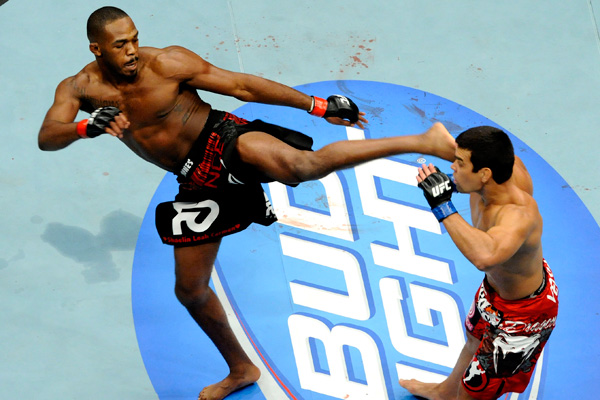 Jon Jones has cemented his place among the sport’s pound-for-pound best. | Dominic Chan/WENN.com


For those who wanted to see how he would respond to adversity, well, now you have it. Jon Jones lost a round.

You have to go all the way back to his UFC beginnings, when a 20-year-old kid from New York used the Octagon as a lab to experiment with moves he had seen on YouTube, to find the last time that had happened. Back then, it was easier for a Stephan Bonnar or an Andre Gusmao to steal a round. That was three years ago, though, when he did not have Greg Jackson in one ear and Mike Winkeljohn in the other; when Georges St. Pierre was more role model than equal; when beating three former champions in one calendar year was not a distinct possibility.

Now, however, when faced with a man whose style has been MMA’s answer to hieroglyphics, Jones looked human for five minutes. A low kick was countered by a stinging left hand. Flashy strikes whizzed harmlessly past his foe. The champion was deemed to have a look of concern on his face as he returned to his corner at the end of the frame.

Finally, Jones was going to face the trial-by-fire that so many longed to see, and it was only fitting that Lyoto Machida, the previous owner of the unbeatable label, was going to provide that test in the UFC 140 main event on Saturday in Toronto.

Four minutes and 26 seconds later, it all seemed like silly, wishful thinking. Once the man they call “Bones” finally latched on to Machida, it was academic. Vicious elbows set the tone, and not long after, Jones’ famously long arms were wrapped around his opponent’s neck in a vice-like grip, clinching what was possibly the best year in mixed martial arts history.

Someday in the future, Jones’ 2011 -- three victories in title fights plus another over a Top 10 contender -- will be appreciated for its rare combination of elite competition and activity. In the current UFC climate, most of the promotion’s pay-per-view alpha dogs are not nearly that busy. St. Pierre has fought no more than twice a year since 2007; he last competed four times in 2005, a year before becoming welterweight champion. A torn knee ligament will keep him shelved for the majority of the coming year.

Middleweight king Anderson Silva, while thoroughly breathtaking when in action, has never had three title fights in 12 months. Shoulder issues will sideline the 36-year-old until the summer, so seeing “The Spider” compete even twice in 2012 should be considered a luxury. Then, there is Brock Lesnar. While the former heavyweight champion is not as accomplished as St. Pierre or Silva, each time the hulking Minnesotan steps into the cage is an event. Unfortunately, lingering bouts with diverticulitis have often made those events a once-a-year occurrence.

None of the promotion’s top three draws is under 30, and none of the three is the perfect picture of health at the moment, which is why Jones needs to be the UFC’s No. 1 guy sooner rather than later, even if it is unlikely that he replicates his 2011 anytime soon.

“Whoever will be next, they’ll have to wait for quite some time,” Jones said in a post-fight interview on UFC.com. “I have no intentions of fighting within the next four to five months.” 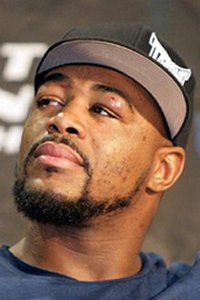 Rashad Evans File Photo
Evans may be next for “Bones.”
As it seems to be with everything involving the 24-year-old, the need for him to shoulder the promotional burden has come sooner than expected. Yet for all the historical ramifications that his showdown with Machida had, Jones’ capstone bout of 2011 was severely underexposed.

UFC commentator Mike Goldberg worked hard to sell a comparison between Jones and Michael Jordan at the outset of the broadcast on Saturday, citing Jones’ charisma both inside the Octagon and out as similar to that of the NBA legend. Jones does have his own shoe deal, but no one is ready to mention K-Swiss in the same breath as Nike just yet. A more apt comparison for Jones is LeBron James, as both men are uniquely talented but seem to polarize fans with their personas. The difference is James has been a household name for years, appearing in magazines in middle school and having his high school basketball games broadcast on national television. The widespread interest in “The Decision” in the summer of 2010 was the culmination of years of hype and exposure.

ESPN cameramen have never crammed into a gym for an Iowa Central Community College wrestling meet, and Jones’ own decision to leave the New York-based Team Bombsquad for Jackson’s Mixed Martial Arts a few years ago barely created a ripple on the MMA scene at the time, much less nationally. For all he has accomplished in such a short period of time, Jones is not recognized by mothers and grandmothers as must-see TV just yet.

Jones-Machida lacked the buildup that a fight between the future face of the UFC and what was perceived by some as his most difficult challenge should have had. Much of that is unavoidable, as Zuffa’s card-a-week policy serves to saturate the market and lessen the interest of the mainstream audience. By the time Dec. 10 rolled around, fans had already seen the UFC’s debut on Fox, a five-round classic between Dan Henderson and Mauricio Rua and two more winners of “The Ultimate Fighter” series crowned in an exhausting four-week span. It is understandable why UFC 140 might have flown under the radar.

Not helping matters, Miguel Torres’ lack of Twitter tact, Rashad Evans’ warped sense of school pride and yet another injury to St. Pierre stole some of the fight week spotlight from Jones. What it means is that Jones needs even more of a push in 2012 to allow his popularity to catch up to his prodigious talents.

He cannot do it alone. In a perfect world, Evans beats Phil Davis at UFC on Fox 2 in January to set up a long-awaited showdown against Jones. With plenty of pent-up animosity still existing between the two former teammates, a Jones-Evans title fight has the potential to outdraw Evans’ UFC 114 bout with Quinton Jackson. If that fight can come to fruition, the UFC would be wise to allow it some breathing room, with a few weeks between cards so the feud can marinate and build interest. It could potentially move Jones to a new level in terms of recognition and branding.

A win over Evans would make a future battle with Dan Henderson even more highly anticipated. Henderson’s powerful right hand lends credence to the phrase “puncher’s chance” in a way that no one else at 205 pounds can claim. It is another question Jones felt he answered about himself against Machida.

“That’s definitely something that was made up by media, that I couldn’t take a punch,” Jones said in the post-fight UFC press conference. “I knew that I could take a punch, and I’m glad that I got to prove it tonight.”

Neither Evans nor Henderson is in Jones’ immediate future. For now, expect “Bones” to disappear for a while for some much needed rest and relaxation. He has earned it: 2012 might not be as prolific as 2011 for the champion, but it does have the possibility to be just as memorable if everything falls into place.