Ramerez came out looking to strike, catching Von Flue with a punch before being wrapped up in the clinch and tumbling to the mat. Ramerez rolled for a reversal, but Von Flue kept rolling, landed on top and took Ramerez’s back.

From there Von Flue kept his hooks in and worked for a rear-naked choke. Meanwhile Ramerez punched behind him, trying in vain to break the hold. He could not and went to sleep at 2:54.

After the fight Von Flue thanked the crowd and praised his opponent’s toughness. He then took a moment to propose to his girlfriend.

Mike Cook dispatched of the heavily favored Carter Williams via submission from strikes at 2:33 of the second round.

Williams looked good early, taking Cook down and cutting him over the right eye with brutal ground-and-pound. The first round was an exciting series of reversals and strikes from the top position, but the second was all Cook.

Cook got the takedown when Williams, best known as a kickboxer, chose to clinch rather than strike. Cook took advantage of the strategy by quickly getting a takedown into side control, where he transitioned into full mount. From there he pounded on Williams until he tapped.

John Reedy dominated Preston Scharf before finishing him via guillotine at 2:49 of round two. The first round was all Reedy, as he smothered Scharf with superior wrestling and strikes from the top. 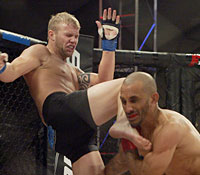 Jeff Sherwood/Sherdog.com
Zack Trammel crushed Josh
Herrick with a kick.
Scharf looked better in the second when he pulled off a reversal to gain top position for the first time in the fight. Unfortunately for Scharf, however, Reedy locked in a guillotine during the transition. The only thing Scharf could do from the top was tap.

Jimmy Dexter defeated Tony Juarez by unanimous decision in an entertaining fight. Dexter kept the bout against the cage in the clinch, pushing away occasionally for distance to land punches. Both fighters tagged each other repeatedly on the button when they did separate, though neither managed to down his opponent until Juarez tagged Dexter with a straight right that put him flat.

However, referee Josh Rosenthal ruled that the shot was after the bell. In the end, all three judges scored the bout for Dexter: 30-27 and 28-28 twice.

Joe Morales stopped Carlos De Soto at 2:08 of round one to start off the main card bouts. Morales scored early with a glancing head kick followed by a strong leg kick. He then shot in for a single leg, lifting De Soto high into the air for a slam that echoed throughout the arena. Morales stayed busy from side mount, landing punches and elbows to De Soto’s head and body before forcing the tap.

Zack Trammel stretched his winning streak to three in a row with a brutal KO victory of Josh Herrick. Trammel hurt Herrick early with a knee that opened a cut below his right eye, leaving him visibly rocked. Smelling blood, Trammel attacked, landing a hard straight right that put Herrick on the canvas. The official time of the stoppage was only 49 seconds into the first.

Darren Crisp defeated Marc De La Cruz in one of the more entertaining bouts of the night. It was evident from the opening bell that Crisp had the advantage standing. De la Cruz tried to keep the fight on the ground, but Crisp avoided takedowns and punished his opponent with knees until the fight was stopped 2:00 into the second round.

Chad Sutton looked impressive in his submission victory over Eli Moreno, which came via guillotine 56 seconds into the first round.

Nikk Covert kicked off the evening with a stoppage of Billy Terry at 2:04 of round two.