Not long after the World Extreme Cagefighting featherweight champion dismantled Leonard Garcia in the WEC 39 main event on Sunday in Corpus Christi, Texas, attention turned to a potential rematch with the man he dethroned in November. A second fight with promotional golden goose Urijah Faber waits in the wings.

“I would fight anybody,” Brown said. “There are a lot of guys deserving of a shot, but I think the fans want to see me and Urijah the most, so I think that makes a lot of sense. I wouldn’t want to shortcut Jose Aldo or Wagnney Fabiano or anybody like that, but I think fans would like to see Urijah and I fight again.”

Brown (21-4) snapped Faber’s 13-fight winning streak with a first-round technical knockout at WEC 36 four months ago in Hollywood, Fla. It marked Faber’s first defeat since September 2005 and put Brown on the map. Still, the American Top Team veteran did not feel like the belt belonged to him until he made his first successful title defense.

Brown (21-4) won his ninth consecutive bout at Garcia’s expense, as he submitted the Jackson’s Mixed Martial Arts slugger with an arm-triangle choke 1:57 into the first round. It took him 26 fewer seconds to defend the belt than it took him to win it. Brown floored Garcia with a right hand, opened a cut on his forehead and went to work on a submission, first with a rear-naked choke and then with the finisher.

“I don’t know why, but I trained harder for this one than I did the Urijah fight,” Brown said. “Mentally, I was in a really good place. I heard a lot of people saying, ‘You’re the best in the world.’ People are trying to say that, so I started thinking like that. I actually pushed myself harder than I ever had before.” 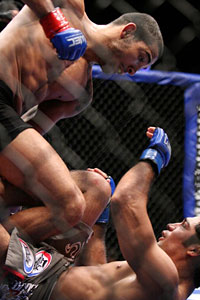 Aldo wants his name mentioned when talk turns to the top featherweight contenders in the WEC.

One of the sport’s top prospects, the 145-pound juggernaut has opened many an eye since he made his promotional debut in June. The 22-year-old Brazilian has finished four straight foes, including decorated Shooto veteran Alexandre Franca Nogueira, and appears to improve with each appearance. Aldo (14-1) smashed through Chris Mickle in just 99 seconds at WEC 39 and staked his claim as the No. 1 contender in the featherweight division.

“My target is the title,” he told WEC.tv. “I’ll never stop before the title or after the title. My motivation is to win all the time. I come to fight. I love to fight. I’m prepared to fight anybody.” An accomplished submission grappler, Aldo has developed into a potent striker in mixed martial arts competition. He has rattled off seven wins in a row since he suffered the lone setback of his career at a Jungle Fight show in 2005. Eleven of his 14 victories have come by knockout, technical knockout or submission.

With Brown focusing on a potential rematch with Faber, Aldo understands he may still be one step away from a shot at the belt.

“I’m trained to fight with the best guys -- Leonard Garcia, Brown or Faber,” he said. “It doesn’t matter which one’s the next fight for me.”

Damacio Page was rewarded for being the man behind perhaps the most vicious knockout in WEC history.

The 26-year-old Page (11-4) left the world-ranked Marcos Galvao unconscious against the cage in just 18 seconds at WEC 39, as he rebounded from his submission loss to top bantamweight contender Brian Bowles in August.

Medical personnel had to carry Galvao out of the cage. Page, meanwhile, pocketed a $7,500 “Knockout of the Night” bonus. Even so, it was not the quickest KO of his career. The K-1 veteran knocked out Mark Haire in just six seconds at a Fightworld event in 2006.

Other beneficiaries of the WEC’s post-fight generosity were Brown -- who banked a $7,500 “Submission of the Night” bonus -- and Johny Hendricks and Alex Serdyukov, who left with matching $7,500 “Fight of the Night” bonuses. Hendricks, a two-time national champion wrestler at Oklahoma State University, remained unbeaten as a professional and now appears destined for the UFC welterweight division after he earned a unanimous decision against Serdyukov.

Judges had a busy night at WEC 39, as more than a third of the 11 bouts on the card ended in split decisions. That did not include former lightweight champion “Razor” Rob McCullough’s majority decision victory against Marcus Hicks … “The Ultimate Fighter” season one veteran Alex Karalexis avoided the first three-fight losing streak of his career when he stopped Greg McIntyre on first-round strikes. The 31-year-old had not won in almost two years … The three men who walked into the America Bank Center with undefeated records -- John Franchi (5-0), Ricardo Lamas (6-0) and Hendricks (5-0) -- all walked out with their unblemished marks intact. Lamas -- a late replacement for the injured Rich Crunkilton -- pulled the biggest surprise, as he outpointed International Fight League veteran Bart Palaszewski in a split decision … Franchi, Lamas and former Sportfight welterweight champion Mike Pierce all were victorious in their promotional debuts. Pierce (7-1) was the only one of the three to finish his bout decisively, however, as he christened the show with a third-round TKO against Justin Haskins. The 28-year-old former carpenter has won four in a row.