The career of 25-year-old Takeya Mizugaki did not go backwards in his loss to World Extreme Cagefighting bantamweight champion Miguel Torres.

Mizugaki gained an entire legion of new fans in the WEC 40 main event, as he pushed the heralded titleholder to the limit in a five-round unanimous decision defeat on Sunday at the UIC Pavilion in Chicago. Scores were 49-46, 49-46 and 48-47.

“I do think the judges were right, and so I do accept the loss,” Mizugaki said. “I think he beat me in the clinch.”

Mizugaki (11-3-2) opened a cut on Torres in the third round and put a considerable scare into the champion and his loyal followers. In his debut on American soil, he pushed one of the sport’s top five pound-four-pound fighters the distance and did so without ever being significantly threatened. Mizugaki’s emotions boiled over afterward, as he leaned on one of his cornermen and broke down in tears.

“I knew I had to give everything I had to win this fight,” he said. “I felt like I did give everything, but at the end, I realized I was a little bit short. There are still parts of the game I need to improve. I have to say thank you to Miguel Torres for making me realize that.”

Mizugaki seems destined to remain near the top of the WEC bantamweight pecking order. He had won five in a row prior to his encounter with Torres, and a rematch with the champion crossed his mind before he left the arena.

“In terms of the future, I would like to continue fighting in the WEC, win a couple more, and I’d like to have a shot at Mr. Torres again,” he said. “I also hope Mr. Torres will keep his undefeated streak going until I come up and get my right to challenge him again.”

Mizugaki has a fan in Torres (37-1), who had finished 11 straight foes before he ran into the Cage Force veteran. The 28-year-old champion, on an amazing 17-fight winning streak, went the distance for the first time since May 2005.

“What threw me off was his ability to take punishment,” Torres said. “He took a lot of punishment and didn’t slow down. I was hitting him with shots, and he was just taking them. I spar with a lot of big guys -- a lot of great strikers -- and I’ll hit them and I’ll hurt them, and I can tell I hurt them. I was hitting him and I felt like I was hurting him, but he wasn’t showing any sign of that at all. He took everything like a champ. He has the Samurai spirit. He’s a very strong fighter.” 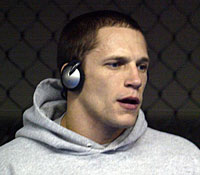 Welcomed rudely to the bantamweight division by a unanimous decision loss to the unbeaten Joseph Benavidez, Jeff Curran plans to recalibrate his career.

In December, Curran made waves when he reaffirmed his desire to fight Torres inside the WEC cage. Though the two men have long competed in many of the same circles, their paths have never intersected, and it may take some time before they do.

“It’s way off on the horizon for me,” Curran said. “I need to regroup and start realizing what’s next for me. I’m not going anywhere. I was born to do this. I love this game, but I need to get on track. I don’t want the pressure. I don’t want the title. I want to get back to some roots and just train and try to find myself. I don’t have to eye guys like Miguel. He’s on fire right now. I need to just get stable in my spirit.”

Curran (29-11-1) drove home the idea that his desire to fight Torres should not be viewed as a slight against him. He holds the WEC champion in the highest regard.

“The match between Miguel and I was always a dream match for everybody here locally in Chicago, and I kind of took it upon myself -- when I decided I was coming to the 135-pound weight class -- to try and bring some attention to the possible matchup,” Curran said. “When you’re in a position like I’m in, you have to go towards fighting the best guys. I need to set my long-term goals before I set my short-term goals. In the process of doing that, it started building the hype. It was never meant as disrespect towards [Torres].”

Competing for the first time since his decision loss to reigning WEC featherweight king Mike Thomas Brown in June, Curran admits the long layoff may have played a role in his inability to handle Benavidez (10-0).

“I’ve been sitting almost 11 months,” he said. “I made the comment to one of my coaches: ‘Imagine showing up to a job for the first time in 11 months.’ I used to be so much more ambitious when I was fighting every other month or twice a month. This was my first fight in 11 months. I felt a little out of sorts.”

Even so, Curran had nothing but praise for Benavidez.

“I think he’s going to go and do awesome things in the sport,” he said.

The cut to 135 pounds went well for Curran, a 31-year-old Brazilian jiu-jitsu black belt who has lost three fights in a row for the first time in his 11-year career.

“I definitely realize this is where I should be my whole career,” Curran said. “I felt great.”

Three-time Brazilian jiu-jitsu world champion Rani Yahya banked a $10,000 “Submission of the Night” bonus after he needed just 67 seconds to secure a tapout from Eddie Wineland in a WEC 40 dark match, promotion officials revealed during a post-fight press conference.

After back-to-back defeats to former WEC bantamweight champion Chase Beebe and Norifumi Yamamoto, Yahya (13-4) has repositioned himself as a contender in the 135-pound division. The 24-year-old Rickson Gracie protégé has posted consecutive first-round submission wins against Wineland and Yoshiro Maeda.

Yahya made surprisingly quick work of Wineland (14-6-1), a former Total Fight Challenge titleholder who had not been submitted in almost five years. Wineland was aggressive in commanding the center of the cage, but Yahya worked a single-leg, captured his back in a scramble and cinched a rear-naked choke for the finish.

Others who walked away from the UIC Pavilion with some extra change included Torres and Mizugaki -- who pocketed matching “Fight of the Night” bonuses in wake of their memorable five-round war -- and Anthony Njokuani, who left with a $10,000 “Knockout of the Night” bonus after he flattened former International Fight League mainstay Bart Palaszewski with second-round strikes.

Fast-rising featherweight Rafael Assuncao -- a man who once submitted Joe Lauzon and owns a victory against Jorge Masvidal -- has put together a five-fight winning streak since his majority decision loss to Curran in 2006 … Former IFL featherweight champion Wagnney Fabiano has made a seamless transition to the WEC. In his first two appearances, he has defeated the respected Akitoshi Tamura and former Brazilian jiu-jitsu world champion Fredson Paixao … Officials announced an attendance of 5,257 for the WEC’s debut in Chicago … 1,961 days have passed since Torres’ defeat to Ryan Ackerman at an Ironheart Crown event in 2003 … Njokuani (10-2) became the first fighter to finish Palaszewski (30-13) with strikes since Cole Escovedo struck the Polish lightweight into submission in his professional debut seven years ago.