After 53 events and 576 fights, World Extreme Cagefighting took down its cage and rolled up its blue carpet forever.

The time has come for the lighter weight classes, which were featured prominently under the WEC banner, to get their time to shine inside the world’s most prominent MMA organization. Featherweight king Jose Aldo was already crowned as the UFC’s first 145-pound champion, and Dominick Cruz and Scott Jorgensen fought it out for the inaugural UFC bantamweight title at the WEC’s farewell, WEC 53 “Henderson vs. Pettis,” on Thursday at the Jobing.com Arena in Glendale, Ariz.

Analysis follows for the four main card bouts at WEC 53.

What happened: Shalorus, an Iranian-born wrestler, had his way with Palaszewski for much of the fight. Only his maligned conditioning and Palaszewski’s toughness prevented an early stoppage. The “Prince of Persia” came out of the gates like a raging bull and planted his opponent on the mat with an awesome arm-drag takedown. Shalorus then proceeded to beat on Palaszewski with some vicious ground-and-pound.

As the fight wore on, Shalorus did not exclusively look to wrestle Palaszewski, even though such a strategy figured to work in his favor. On the feet, his opponent had the advantage. Palaszewski also did a better job of defending the takedowns. The former International Fight League mainstay landed the majority of good strikes during the stand-up exchanges but lacked the volume necessary to really do damage. Palaszewski landed a big knee in the final seconds of the final round but eventually dropped a split decision.

Forecast for Shalorus: His wrestling pedigree and power will pose problems for many opponents in the UFC, as well. However, his lack of striking technique and questionable conditioning will be exposed much more brutally in what has become the shark tank division in MMA. Interesting challenges for Shalorus could come from Tyson Griffin, “The Ultimate Fighter” Season 12 finalist Michael Johnson or fellow former WEC fighter Shane Roller.

Forecast for Palaszewski: At 4-3 in the WEC, his draft into the UFC seems far from assured. However, he remains the only man to defeat newly crowned WEC lightweight champion Anthony Pettis. Due to his experience and balanced skill set, Palaszewski would match up well with “The Ultimate Fighter” Season 6 winner Mac Danzig, Aaron Riley or former UFC lightweight title contender Joe Stevenson.

What happened: The story of the fight between Horodecki, the 2007 IFL lightweight grand prix finalist, and Cerrone, a three-time WEC title contender, was the latter’s three-and-a-half-inch reach advantage. Cerrone used it cleverly. The two men exchanged takedowns in the opening round, but neither of them could keep the other down, let alone exact much damage. Horodecki ate a knee, as he moved in with a reckless takedown attempt. Cerrone, who had the much stronger grappling credentials, ended round one on the Canadian’s back.

Horodecki took down Cerrone again in the second but landed in an omoplata. After the two lightweights jockeyed for position, Cerrone slapped on the patented triangle choke that had won him five of his first seven bouts. Horodecki defended well for more than a minute but tapped out after being struck by a couple of Cerrone elbow strikes.

Forecast for Cerrone: “Cowboy” called out American Top Team’s Cole Miller following his victory. That fight will take some time to materialize, as Miller has a stiff test of his own on the horizon. He will meet Matt Wiman at UFC “Fight for the Troops 2” on Jan. 22 in Texas. In the meantime, Cerrone could take on with Joe Lauzon or Terry Etim.

Forecast for Horodecki: The Shawn Tompkins protégé holds a 2-2 mark in the WEC. Entering the UFC, the question now arises as to whether or not the young Canadian would perhaps be better suited competing in the 145-pound division. There, Horodecki could match up with Leonard Garcia, Chan Sung Jung or Nam Phan in fun fights. 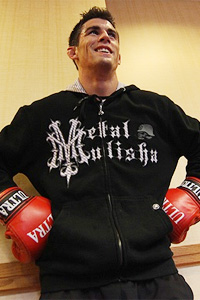 
What happened: Entering the fight, there were a couple of question marks surrounding Cruz. Was he really worthy of holding a UFC belt? If so, did he deserve to be mentioned in the same breath with great champions like Georges St. Pierre, Anderson Silva and Mauricio “Shogun” Rua? The 25-year-old Californian removed those doubts, as he turned in a dominating performance against Jorgensen, a three-time Pac-10 Conference wrestling champion who carried a five-fight winning streak into their match.

Cruz’s vast arsenal of weaponry proved too much for Jorgensen to handle. The Alliance MMA rep played off his reach advantage and landed crisp punch-kick combinations at the start. Later, he turned to a counter boxing style and kept Jorgensen guessing with his speed. Finally, in the championship rounds, the Lloyd Irvin understudy took down the more experienced wrestler at well, to the surprise of many pundits. Cruz swept all five rounds on all three scorecards, retaining his belt.

Forecast for Cruz: After the fight, he called for a rematch with former featherweight champion Urijah Faber, the only man to defeat him. That would certainly garner plenty of interest. Besides a potential showdown with “The California Kid,” smaller featherweights like Manny Gamburyan or even Mike Thomas Brown could choose to drop to 135 pounds to challenge Cruz.

Forecast for Jorgensen: At 7-3 inside the WEC, including solid wins over Brad Pickett, Antonio Banuelos and Takeya Mizugaki, “Young Guns” deserves his spot on the UFC’s bantamweight roster. A duel with Nick Pace, a rubber match with Banuelos or even a showdown with former divisional ruler Miguel Torres could await Jorgensen.

What happened: “Showtime” and “Smooth” were featured in a fight that proved to be a worthy swansong for the promotion. The two lightweights punched, kicked, wrestled, grappled and tried to finish one another. Henderson had the better start, bullying the challenger with his wrestling in round one. Pettis answered, as he dropped the defending champion with a left-right combination early in the second stanza, took his back and worked for the rear-naked choke. Henderson defended well.

Back control was also the name of the game in the third round, as Pettis rode a standing Henderson’s back for the majority of the five minutes. While he failed to cinch the rear-naked choke, he did plenty of damage with punches to the ribcage. Round four saw both men let loose on the feet and exchange “Mata Leao” attempts on the mat. In addition, Pettis attempted a guillotine choke with one minute left in the round. Heading into a decisive round five, the fight was tied on two of the three judges’ scorecards.

In that last round, Henderson attacked with kicks, while Pettis answered with crisp punching combinations. The challenger landed a flying knee, but Henderson scored with another takedown. After some more ground action and with time running out, Pettis took a risk and attempted a surreal move that won him the round and ultimately the fight. In true ninja fashion, he took a running start, jumped off the cage and delivered a well-timed flying kick to the face that knocked down Henderson. While it did not knock out the champion, it proved to be the decisive moment in the fight.

Forecast for Pettis: “Showtime” will take on the winner of the UFC 125 showdown between Frankie Edgar and Gray Maynard to unify the UFC and WEC championship belts. That fight could take place as early as UFC 129 in April, when it would serve as one of the headlining bouts at the first UFC event in Toronto. It is also possible that Pettis and the Edgar-Maynard winner will serve as coaches for the next season of “The Ultimate Fighter” reality series. If that scenario plays out, Pettis would not see action until June.

Forecast for Henderson: The exciting former champion figures to return to action much earlier than Pettis. In fact, he could become an option for the the UFC’s return to the Versus network on March 3 against Rafael dos Anjos, Charles Oliveira or even “The Ultimate Fighter” Season 12 winner Jonathan Brookins.